Odds and ends that have caught my eye -- I bathed all six dogs today ( that's close to 300 pounds of dog, none of which was particularly cooperative) and have hardly an idea left in my head beyond going to bed. 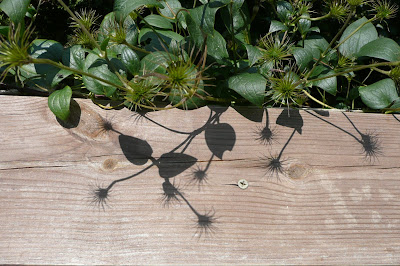 I love the Dr. Seuss-like look of these clematis seed pods -- particularly their shadows. Or maybe they're space aliens. 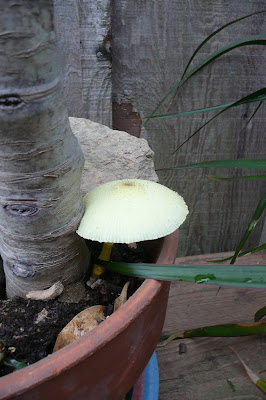 One morning after a rain this exquisite pale yellow mushroom appeared as if by magic in my jade plant's pot . 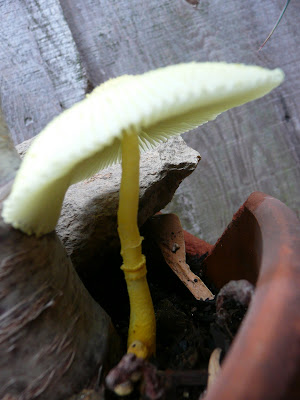 So beautiful, its cap tilted at a jaunty angle on the sulphur-colored stem -- but by evening it had shriveled away almost to nothing.

And this solemn fellow below was in our orchard, eating windfall apples -- some of which, I suspect were fermented because he took a long time to notice me and when at last he did, rather than flying, he waddled away with a drunken roll. 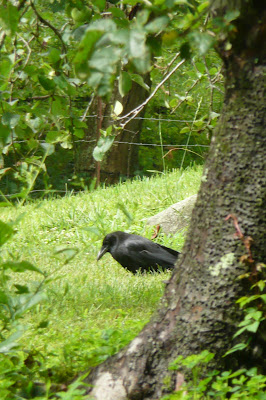 I really like crows -- such big, handsome birds. And so very smart. I got to know one slightly some years ago. He had had been hit by a car and had a broken wing and a broken leg and was floundering about on the roadside. I picked him up, put him in a dark box and immediately took him to a vet.

The vet declined to treat him but told me to try splinting his leg and to cut the foot off a sock and slip the tube that was left over the bird's body to immobilize his wing in hopes of letting it heal. I did this and for six weeks the crow lived in a big dog crate on a table in our kitchen, growing fat on hard-boiled eggs and dog food. I didn't attempt to tame him -- just gave him food and water, kept his cage clean, and went about my business. He watched everything and was supremely calm in what must have been a very confusing situation. My respect for him grew daily.

After some time I removed the splint and the sock and the crow began to flap his wings, as if he were exercising. After a few days of watching him rehabilitate himself, I took the cage outside and opened the door. He stepped out, looked around to get his bearings, and took off for the woods, flying with slow, steady wing beats, never looking back.

Vicki, it amazes me how you can simply look around you and come up with the neatest things to write about ... guess that why you make a living at writing and I don't! HA!!

Neat crow story, but have you noticed more crows then usual over your way this year? They are extremely abundant over here in east TN this year, so much so that many folks have commented on it. Interesting ........

We always have a fair number of crows -- if anything, there may be slightly fewer this year. I guess they've all gone to Tennessee.

did the crow 'caw' often? I can only imagine what that might have sounded like indoors. How did the cats react?

It's been quite a while -- I don't think he cawed beyond a little small croak once in a while. Re cats -- I believe that this was in a catless period -- when we had the mastiffs. But crows are really big -- not many cats would mess with them. As for the dogs, they pretty much ignored him as I recall.

Vicki, now I feel guilty about not having washed our five dogs after saying I was going to for the past two weeks. It's such a chore, and I have to chase at least a couple of them down to do it, after which they go roll in the dirt.
We have more crows this year, too, Pat. What's goin' on?

We used to bathe our cats. Wasn't so bad since we started when we first found them at about 2 weeks of age. But, we let it go too long at one point and had lots of trouble the last time we tried. (Water all over the floor, a cat literally climbing the curtains...it was not a pretty sight.)

We bathed Eddie once when he'd fallen into a container of used motor oil. It took a very long time (Dawn detergent is what you need if you ever have this problem) and repeated applications of soap and rinsing. He was quite subdued; I think he knew he was in real trouble. But without the emergency, I wouldn't have the nerve.

Comments about washing cats brought back memories of a feral young cat I picked up at the barn. I wanted her for a pet.
Immediately, I realized she was covered in fleas and I was not about to let her inside my house until she was "de-flead." I'd never had a cat and didn't have any idea that the flea powder I used was for dogs only. I was newly married, young, and I paid no attention to the directions on the box.
As soon as I finished dusting her, the cat began licking her fur. I watched bubbles forming around her mouth. Foamy slobber sent me into a panic. I had poisoned my new kitty.
I grqbbed up the unsuspecting feline and plunged her into a bucket of cold water. Terrified, the cat turned wrong side out and climbed my bare arm with her sharp claws. The water had barely wet her fur before I turned her loose. She ran and I watched the blood run down my wrist. Thankfully, she lived through the ordeal and stayed with us for 17 years. I've never tried to bathe another cat.

A little late in coming, but--I love the crow story! You might like a book called "Bird Brains", whose author I can't remember. It's about crows and other members of their family, and the amazing things they do.

Hey Mary -- I'll make a note of it. There's a video on YouTube of a crow MAKING a tool -- bending a thin piece of wire to make a hook to pull something out of a tight space. They are WAY smart.