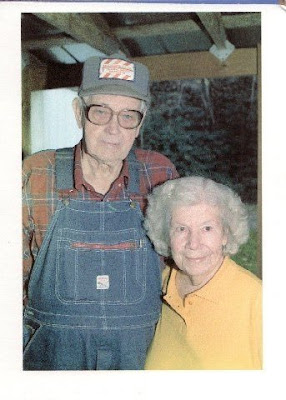 Paul and Grace Henderson were married over fifty years and you almost never saw them apart. They had lived a self-sufficient life, high on a mountain in the same house Grace had been born in. They were good friends to everyone and mentors to many of us newcomers.

When Grace died last February. I wrote about her burying up on Crooked Ridge . Today, just a few days short of a full year later, I followed a line of car and trucks, winding up the steep road to Crooked Ridge, going to say goodbye as Paul was laid to rest beside his Gracie. 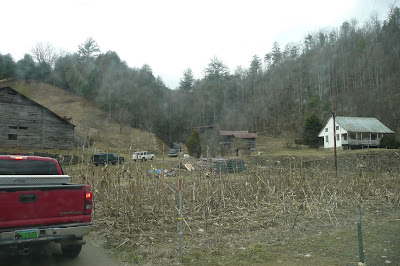 Just like last year, the wind gusted and the trees sighed and dead leaves rattled around the gravestones. The same friends and neighbors helped fill the grave and set the foot stone. 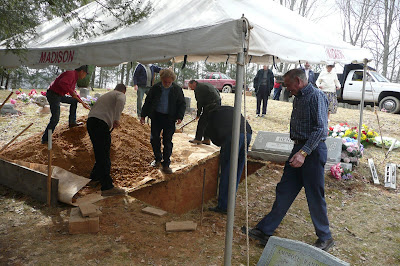 Ever since Grace went, Paul 'hasn't done no good,' as they say around here. He was already slipping into Alzheimer's and the loss of his partner of so many years left him confused and unhappy. During the first days after her death, he kept wanting to go look for her -- back at the old home place.

It's sad to see another of the great old-timers go but I'd like to believe that he's found Grace. 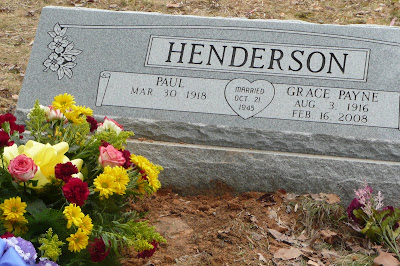 How precious to be "Going Home" at the old home place. I'd like my remains to go somewhere as lasting and as connected.

I'm sorry for the loss of your friends, Vicki. It's always hard when the "old ones" pass. Not only do we grieve their loss, but they also take with them bits and pieces of a way of life that is gone forever. Thank God for authors like you and Sharyn McCrumb who keep the old ways and the old folks alive in our hearts and imaginations.

How bittersweet. Paul must have felt his world was all out of kilter without his Grace, and that would have been felt by all his friends as well. Sad as it is to lose a friend, there must be some sense of relief or gratitude that they are where they belong - together.

According to the stone, he would have been 91 on March 30. That's a long life and it sounds like a it was a good one till he lost Grace, his soul mate. May they both rest in peace.

There was a 'rightness' to it that those of us there commented on.

A lovely thing that I didn't get into the blog was how many, many cars in the on-coming traffic, as the funeral procession made its way from the funeral home to the graveyard, pulled over and stopped till the long line of cars had passed -- a touching gesture of respect.

Vicki - I noticed Grace's maiden name was Payne - My husband's mother was Eloise Payne - I wonder if they are related somewhere down the line...Thanks for sharing. -Liz

Liz -- there are Paynes a-plenty in our part of the county. Our farm was owned by Gideon and Ollie Payne, in the early part of the last century before it was bought by one of their daughters and her husband (the Freemans) and then, probably forty or so years later, by us.

You hear more of older folks having such a hard time dealing with being left alone, and then they don't last long when on their own. Sorry to hear of your friends passing.

FINALLY your blog is letting me leave a comment!

Glad to see you back, Pat! I haven't a clue what the problem is though.

When I was a kid, people used to always stop for funeral processions. I notice they don't do it as often now. I stop. It's just a sign of respect for the deceased and the family and friends.

Some people just aren't meant to be alone. I mean, when you find that person who is the other half of you, losing them is like losing a part of yourself. His passing means they are together again, which is a happy thing.