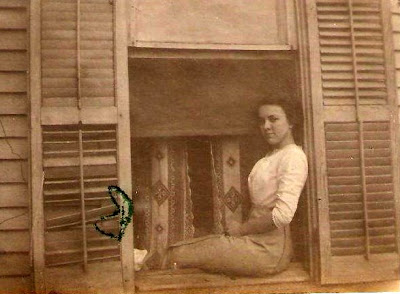 She was born February 21, 1892 in Luverne, Alabama and grew up in Troy, Alabama, the middle sister of three girls-- younger than Mabel (the one in the middle behind the umbrella,) a little older than Pearl (the mischievous-looking one on the left, who used to chase Ruby around the yard, menacing her with the wrung-off heads of Sunday's chicken dinners. All her life, Ruby was slightly phobic about birds and didn't hesitate to blame her sister for this.) 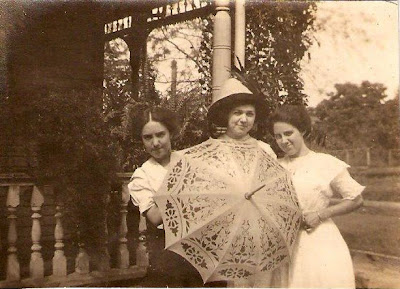 I spent some time going through Ruby's old snapshot album in order to write this blog in honor of the anniversary of her birth. She was my maternal grandmother, known to me and my brother as Ba. She's the inspiration for Elizabeth's Gramma and was the best grandmother imaginable. But I always knew her as an old lady -- though reason and simple arithmetic tell me that for a good bit of the time I knew her she was younger than I am now. 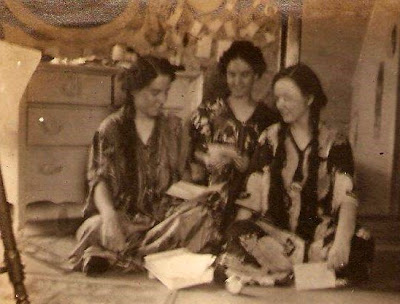 I was in my twenties when I first saw this album and was entranced at the pictures of Ba as a girl, doing silly, girlish things. The album is full of shots of the sisters and their many friends mugging for the camera -- lined up on a fence, crowded into a wagon, posing like a (modest) chorus line to show off their shapely forms. They seemed to have so much fun. 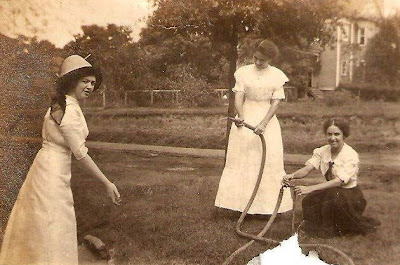 I said to my grandmother back then that I wished we could have been friends.

Her answer was immediate -- "I thought we were."

And, we were, but in a different way -- one that I wouldn't trade even for the fun of hanging out with the Wright girls. I was her only granddaughter and our bond was made stronger by the fact that I was born on her 51rst birthday. Ba lived to be 91 and grew sweeter every year.

But just for a little while, I wish I could have known my grandmother as a girl -- in that time and in that place.

So today we celebrate her birthday, as well as your own. Happy Birthday.

I love the pictures. Your Ba looks a bit mischievous herself. I bet she was a fun person to be around.

Have you ever been told you favor her? I do believe I see a strong
resemblence.......

Thank you, Susan! Having a wonderful day so far -- John fixed the Full English Breakfast -- toast, sausage, fried eggs,grilled tomatoes and mushrooms, with champagne -- and I'm trying to fight off the desire for a little nap before lunch.

Ba was a wonderful combination of fun and good sense.

And yes, Carol, there is a resemblance -- though I grew much, much taller than Ba.

Happy Birthday Vicki! Thanks for sharing the pictures of your Ba. I love the glimpses back into the past and it looks like all three sisters were full of the joy of life.
Tammy

In later years Mabel remained in Troy, Pearl was in Atlanta, and Ruby in Tampa. So the sisters and their husbands met every year for several weeks in Waynesville, NC, where the husbands would golf and the ladies would go to antique auctions and they would all play bridge in the evening.

An odd thing was that, on more than one occasion, the sisters would find that they had bought identical dresses in their three different towns.

Speaking of grandmothers, I just finished reading Art's Blood and Phillip's Aunt Omie reminded me so much of my grandmother it just about took the breath right out of me. Everything from her speech pattern, to the meals she fixed, to the quilts. It was amazing. Thanks, Vicki, for preserving that and a very happy birthday to you!

Hey, Karen, I'm so glad I brought back some good memories! Many, many folks have said that about Omie! She's like the older women I met up here -- the meal is a duplicate of ones we've had in neighbors' kitchens.

And a huge Happy Birthday to you, Vicki. With a hug!

This looks really interesting, what a lovely story!

Thank you, Kaye! I love old pictures too-- and I've got the family albums to prove it!

Thanks for stopping by, Femin Susan!