A Bookish Sort of a Day 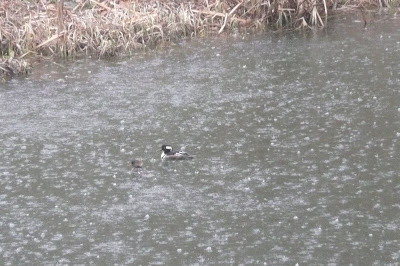 It began to rain yesterday morning as I loaded my car for the trip to Columbia, SC and by the time I started out, it seemed to be settling in for the day. I was delighted, however, as I passed our little pond to catch sight of a pair of ducks -- rare visitors. I think they're Buffleheads -- but can't be sure. The telephoto option on my camera did its best but between the distance and the rain . . .

. . . the rain, through which I drove all the day, was never quite blinding but serious enough to make one slow down a bit. It was an enjoyable ride though as I had fascinating company. First there was Patrick Tull, reading Patrick O'Brian's The Reverse of the Medal. I adore this series, read by this reader, and have listened to all twenty-odd books time and again.

But even though I had new CDs waiting for me, I savored the last disc of this book, enjoying once again the stirring ending which is ( for those of you who have fussed at me for my cliffhanger ending of In a Dark Season) a cliffhanger. As a matter of fact, after his first few books, O'Brian's Aubrey/Maturin series is pretty much one uninterrupted story, broken into convenient book-sized chunks. And they all end in cliffhangers.
. 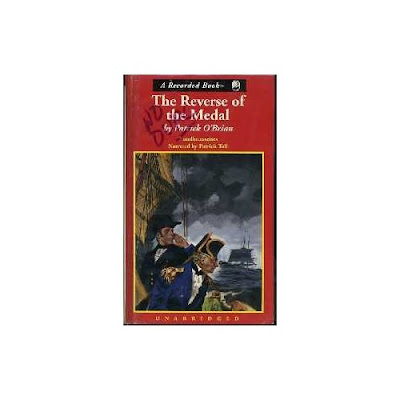 That episode of Jack Aubrey's and Stephen Maturin's adventures having come to an end, I pulled out my birthday present from my older boy and his wife -- a gorgeous box set of the audio edition of C.S.Lewis's Chronicles of Narnia. Here's another of my favorites -- I was introduced to Narnia in childhood and have read and reread the books many a time. But this is the first time anyone's read them to me -- and not just any anyone. Kenneth Branagh does the honors for the first book -- The Magician's Nephew. What a delight! 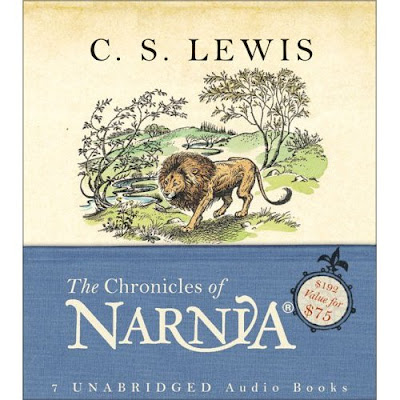 And almost before I knew it, I was in Columbia, SC, pulling into the parking garage right next to Ron Rash. (By chance, I swear. Poor guy probably thinks I'm a stalker.)

Then there was a grand reception last night at the Thomas Cooper Library with amazing food and authors everywhere.

There were poets (Susan Myers was one I got to talk to) and songwriters and writers of 'hen lit' and a very nice couple who write about barbecue (John and Dale Reed) and some mystery authors I 'know' from online loops (J.T. Ellison and C.J.Lyons) and two more (Fran Rizer and Mignon Ballard) who'll be on the SPOOKED panel with me tomorrow and John Milton in a glass case.

Well, not the poet himself, but amid this lively gathering of writers and readers in a library that smelled of books -- there was on display -- in glass cases scattered throughout the room where we were being entertained so lavishly -- a wonderful collection of Milton's work, including a first edition of Paradise Lost and many and various charmingly and alarmingly illustrated editions.

It was the perfect ending to a bookish sort of a day. 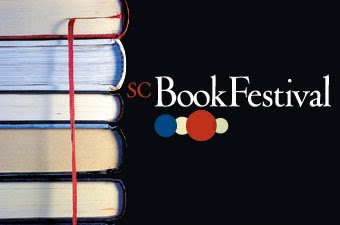 Thank you for sharing the term 'hen lit.' One I hadn't seen before and how very apt. Cluck, cluck.

Vicki, speaking of audiobooks, I've found that it's gotten to the point that the reader of an audiobook is as important to me as the book itself. I love all of Dorothy L. Sayers books, but I bought "Strong Poison" and "Gaudy Night" audiobooks because Edward Petherbridge narrated. Hugh Laurie's narration was the sole reason I purchased a "Great Expectations" audiobook. Audiobooks tend to be pricey for me, so I'm enjoying building a library that I will love to listen to over and over even if it's just to hear that voice.

Marta -- And there's matron lit and geezer lit, both of which terms I really, really hate.

Helen T -- It's such a joy to find a great reader. Patrick Tull's performances are just that -- like listening to a play. He is a master at every sort of voice and accent.

So good to meet you and chat a bit while we were at the SC Book Festival. I'm enjoying your blog, hearing about your travels and writing. Best to you!

Hey, Susan! How nice of you to stop by! Poets are always welcome here (as long as they don't make snide comments about my occasional haikus.)

I enjoyed talking with you as well and am sorry not to have seen more of you.

One meets the nicest people at book events!