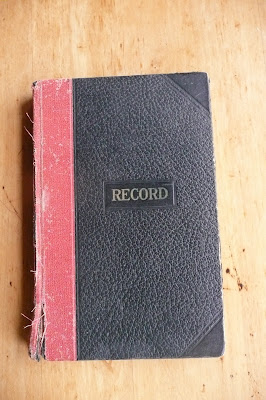 Sheila P., noticing how much I like old journals and how fascinating I find the trivia of the past, sent me this book to peruse -- a record from 1938 into 1958 -- thinking I might find some interesting tidbits for my Birdie book. Sheila said the record book was originally the property of Neva Grady of Cullowhee, NC. There seem, however, to be two record keepers at work -- different handwritings occasionally.

Neva and her Significant Other, from what I can tell, seem to have divided their time between NC and Florida - among the entries for 1938 are records of planting lemons, tangerines, and Temple oranges -- purchased, evidently, from A.E. Nichols, Box 1645, Tampa.

These folks were serious about their record-keeping. Low temperatures, miles traveled, purchase prices and serial numbers -- all went into the book. If they sent off a coupon for a sugar and creamer set, the address and date were recorded, as well as the date the item was received. 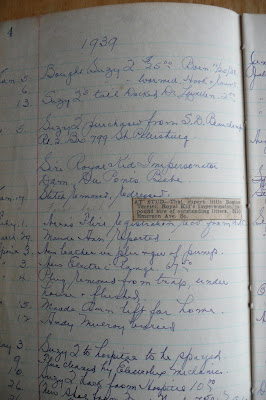 In 1940, on April 1, Neva had a tooth pulled, in May, two and then three more were extracted. Then in June, she records first five pulled, then eight, after which she notes "(All gone)" and two weeks later, "New dentures."

As WWII comes on, ration books are applied for and serial numbers noted down. War bonds are bought. And every once in a while there's a very human note. After an eye exam and a prescription ($3), there's the note "This guy is full of crap." Two weeks later, there's a second eye exam -- by a different doctor. 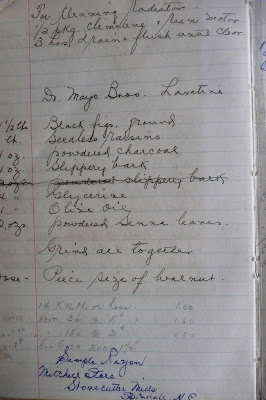 I'm not sure why I find this all so interesting -- but I do! I do! There are stories lurking here, as in the entry for the 18th on the page below: " For the 2nd time in as many months, Neva left my bed to go off by herself." 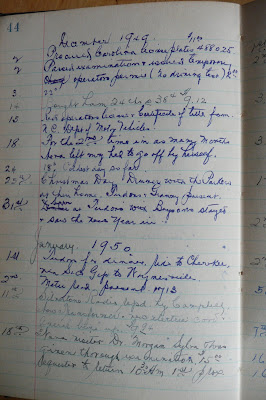 Very fascinating. I have a couple of old registers from one of the old stores here in town (long since closed)...now you've made me want to pull them out and look them over again. :-) It's interesting how detailed people were--I guess in effect they were leaving a diary.
Tammy

OMG Vicki, what a wonderful 'gift' from Sheila P. Stuff like that just fascinates me and wants me to know more ... Hope this does help you out with Miss Birdie's book and future ones too.

Yep, this is way cool! I know I'll make use of bits and pieces.

I once had access to letters written by a Vanderbilt medical student in the 1880s to his fiance in Buena Vista, GA. About two dozen of the letters he wrote were preserved in the house that the couple bought when they married which later became a bed and breakfast. The last of the letters sounds as though the couple had a major disagreement via letter and were about to break their engagement.

But we know they didn't because family pictures of the couple with their 5 children adorn the wall of the house and many family artifacts such as the doctor's black bag for house calls are also on display.

The owner of the B&B bought and restored the house from a great nephew of the couple who sold it with all the family memorabilia included. How sad for his family that he didn't want to keep it for the family, but it was an intriguing story for B&B guests.

I love old books. I'm partial to old text and manners books, but journals are fun if you're lucky enough to find them. Great find.

I'm glad to know others share my somewhat voyeuristic fascination. How neat to read the letters that sounded like the couple broke up -- and then know that they didn't!

I have several old text books -- my favorite is A PRACTICAL SYSTEM OF MODERN GEOGRAPHY from 1846. It's full of stuff like "The Greenlanders are small in stature and are a weak, indolent, and superstitious race." And my Emily Post ETIQUETTE from the 1920s is always fun to read -- managing the small household with only a few servants is SUCH a useful chapter!