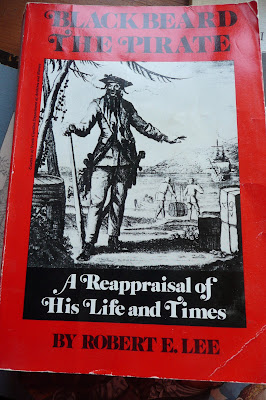 Arrr, Mateys! 'Tis INTERNATIONAL TALK LIKE A PIRATE DAY (which for pure silliness hardly has its equal) and my thoughts turn to Blackbeard and my first (mercifully unpublished) Elizabeth book that had its beginning in a community college class back in 2000.

Below is the query letter I, oh, so painfully, crafted. Notice the alluring hook at the end of the second paragraph! 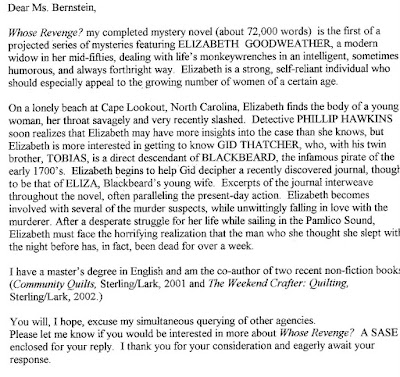 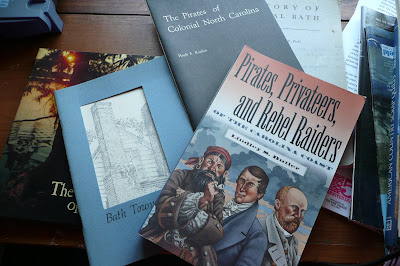 I spent a lot of time researching pirates and especially Edward Teach (or Thatch) aka Blackbeard. He was a giant of a man who liked to tie burning fuses in his beard to terrify opponents as he boarded their ships. My book contains the journal of his thirteenth wife -- a young woman living in Bath, NC, waiting for her Edward's return. I'm still pretty fond of this part of the novel.

It's the present day plot that I'd like to disown-- Elizabeth getting involved with a descendant of Blackbeard(Phillip's there too), the obligatory evil twin -- well, the whole thing is embarrassingly like a bad soap opera.

But when ITLAPD rolls around, I start to think about resurrecting this venture into pirate seas -- send Elizabeth to the coast, redo that lame present day story, bag the evil twin . . . shiver me timbers, shipmates . . .it could happen! 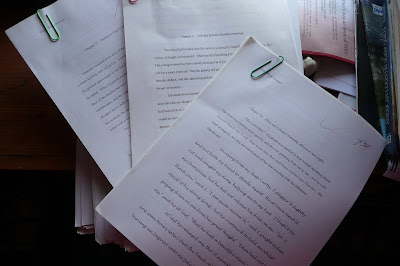 Shiver me timbers mate, no need to wanting to disown your plot, I find it quite interesting. "Three cheers for Vicki and her writing mates ... let her not walk the plank!"

Arrrr...I'm rollin' in me floor! What a hysterical post... and I'm at work too, so it's hard to explain the chuckles. :-) However I agree with Pat, there are still parts of that story that sound mighty interesting! And with the Piraty things all the rage right now...
Thanks so much for sharing, and with that 'hook' in the letter, I don't know how any one ever turned you down.
Tammy

And I would like to see Elizabeth spend some time on the coast... maybe the lowcountry?

It must really take some "gumption" to put yourself out there as a writer. My hat is off to you!

Phyllis - I always tell folks, don't get into this writing for publication if you can't deal with repeated rejection. A dagger in the vitals each time!