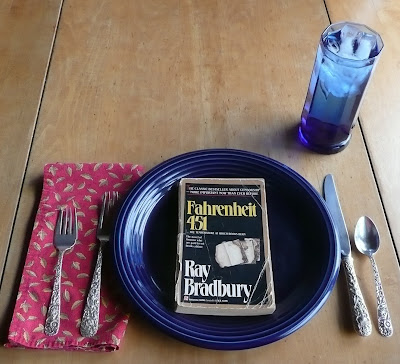 Take a banned book to lunch -- it's the American Library Association's Banned Book Week! And yes, it's true -- massively ironic, but true, that Bradbury's beautifully told story of a society that bans and burns all books has itself at one time been banned -- for use of profanity. 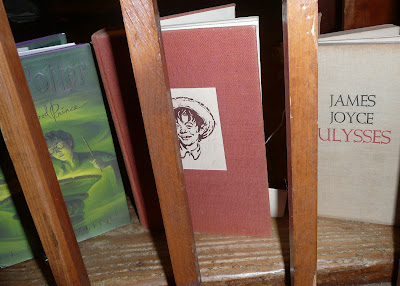 It's in good company -- along with Harry Potter, Huck Finn, Joyce's Ulysses, the Bible, Catcher in the Rye, Of Mice and Men, A Wrinkle in Time . . . the list goes on and on. Books are challenged for political, sexual, or religious content. Books are challenged because nervous parents or governments think these books will teach readers witchcraft . . . make them believers . . . or atheists . . . or turn them into homosexuals . . . or liberals . . . or people who think for themselves.

Of course there are some books not appropriate for young children. And parents should be aware of what their children are reading -- should maybe even read it first rather than make an uninformed decision. But things get dicey when one set of parents wants to decide for everyone.

As a lifelong reader, the thought of not being allowed to read something, just because someone else decided I shouldn't, is anathema. And I salute the brave librarians who stand up to those who would attempt to limit others' right to read. 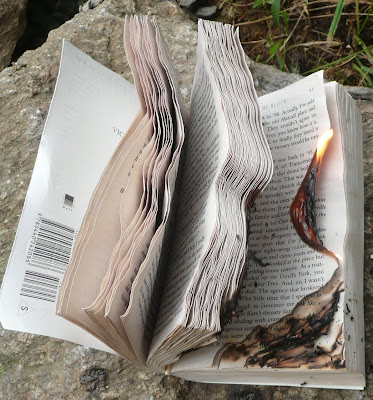 (Yes, one book, and that my own, was harmed in the making of this blog. But it had already suffered major water damage. Still, it was a weird feeling, setting fire to a book.)

Fahrenheit 451 has been a favorite of mine since I was a kid. I don't know how many times I've read it.

When US flags become damaged, they are burned, not just thrown away. Kind of like a funeral pyre type of thing. Since your book was damaged, I reckon that can be considered the same thing. :}

I am always awed by the poetic beauty of Bradbury's prose. Magical!

I read several of Bradbury's books in school. Sometimes I didn't know what he was talking about, but they always drew me in. If I don't like a book, I will usually just donate it, or give it away. However I think in my entire life I've thrown away about 4 or 5 books. One was missing the last section of pages, and the others were dark, horrible things that really just harmed my soul as I read them. Hard to explain, as I've read a wide, wide range of books and usually if something offends me, I just skip through it, looking for the good parts. But once in awhile I have run onto a book like I mentioned. I wonder if others have happened on to books like this and how they responded. (and yes, I still cringed when I saw your burning book! Even if it was damaged already... :-)
Tammy

I, too, have read a few 'dark, horrible' books that I immediately wished I hadn't. I don't think they harmed my soul -- the fact that I hated them tells me my soul was probably in pretty good working order. But those would be books I wouldn't pass on to any one. Nor would I try to have them banned.

I've also read books that dealt with problems so awful that though I hated reading about them, I'm glad the authors had the stomach to tackle them and let people know about such things -- that's the way some social injustices get fixed. Dickens was sometimes accused of being too grim but he made a lot of people aware of terrible social wrongs.

Your post about Boone and the 'before' picture is kind of like that -- hard to read and see but redemptive, in the long run.

Thank you, Vicki. Oh, I can't believe you burned your own book, even if it was water-damaged. I can't imagine how it felt. I liked Susan's comment about it.

Yes, thank you for reminding parents they are responsible for supervising their children's reading, but only their own children's. I've always respected my mother for allowing me to read anything I wanted, but recommending I not read two books at the age I was interested. One was The Exorcist, and looking back, I'm glad I didn't read it. The other was Sidney Sheldon's The Other Side of Midnight. In fact, I respected her so much, I never did read either of them. But, she only requested it, and never told me I couldn't read anything. And, she certainly never told anyone else what they shouldn't read. She was a knowledgeable mother, though, and knew what my sisters and I were reading. (She still does - smile).

Hey, Lesa -- To tell the truth - I put the fire out as soon as I snapped the picture. But I'm probably going to have to give the book a ceremonial burial rather than toss it in the trash.

Good for your mother! I too was allowed to read pretty much anything though there were some pre-comics code horror comics that were on my mother's banned list. (They were pretty gruesome, I admit.)

Vicki, this is a great post. I'm going to recommend it to the arts council and link to it on my laureate blog, too. Also send it to Frannie Ashburn, head of the NC. Libraries division. It should be widely viewed! Sarah Palin should read it, but I don't think she'd have time, being as how she's now in debate "boot camp."
Your posts are gems. I love them. K.

Thanks for the too, too kind words, Kay! I wasn't really trying to be political -- well, maybe just a tad -- but it IS Banned Books Week and I do feel VERY STRONGLY about the subject.