THIS IS A TEST 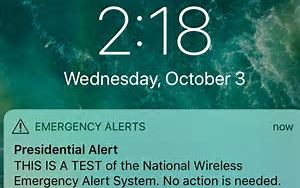 When my phone croaked at me yesterday afternoon (it makes swamp creature noises for messages -- how appropriate in this case) and I saw it was a "Presidential Alert," my first impulse was to sanitize my phone. A bucket of bleach came to mind but it seemed an expensive solution. But, really and truly, even though I know that the Current Occupant wasn't actually texting me, I still felt revulsion.

And then I thought -- how would I have felt if Obama was still in office -- would the presidential tag still have bothered me?

Well, yes, it would have. I wouldn't feel virtually soiled and slightly violated as I did in this case but I wouldn't have thought about disinfecting my phone. The thing is I really don't like the concept of a presidential alert. Surely there's an office of emergency management or some such that could be tasked with nationwide alerts. That is, if the current administration hasn't gotten rid of it.

There's a good article HERE that explains the various emergency alerts and the rationale for calling the highest level 'presidential.' And, yes, in case of some national disaster -- Godzilla, plague, or nuclear holocaust, for example -- I can see the advantage of reaching people by every means possible.

Still.  Why did I keep thinking of the 1960 movie "The Time Machine" and the hordes of passive Eloi who had been programmed over the centuries to respond to a siren.  In the beginning the sirens had warned of air raids and the people had taken shelter in cellars and subway/underground stations. A good thing.

Centuries later, the Eloi still marched underground when the sirens went. But now they were the passive food source for the Morlocks, the mutant race that lived underground.

As I said, I found the whole presidential alert thing unsettling. 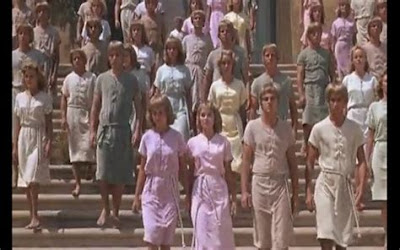 There's a sense that we've now been directly confronted with all the reality of no longer having individual independence...the hackers, the google accumulation of our lives' interests, now we are connected in a blatant way. Oh My Goddesss!

Read Dave Eggers "The Circle" (The movie is terrible so don't watch it) It's a futuristic novel in which a giant google-like company slowly takes away more and more privacy in the guise of safety. Frightening.

We could be headed that way -- I'll look for The Circle.

Ah yes, the Morlocks. A word that sounds not a million miles away from the language DT speaks: bo**ocks.

That film feels a bit prophetic to me.