Native America - A Must Watch 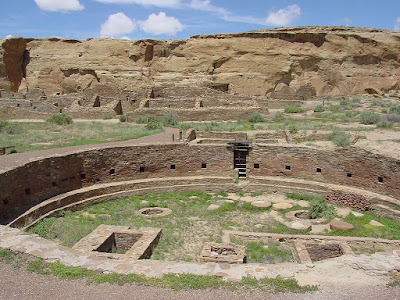 The amazing civilization that flourished in the Southwest -- especially at Chaco Canyon -- was the jumping off point for a fascinating hour spent glued to my laptop last night.

With many thanks to Black Mountain Barb who posted about this series yesterday (her post is HERE., I followed THIS LINK  and learned much that was new to me. 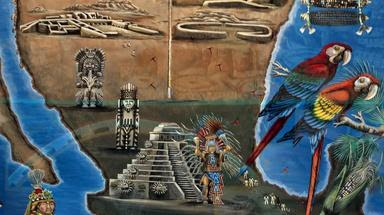 Tall pottery cylinders discovered in Chaco Canyon found to hold traces of chocolate -- evidence of trade with Central America.  Great buildings sited with regard to astronomical markers, creation myths of people coming up from underground -- more links between the Pueblo cultures and the Aztec, Mayan, and Incas.

Did you know that there's a recently discovered tunnel and cave beneath the pyramid of Teotihuacan  -- with ceilings dotted with tiny sparkles to look like the night sky? And situated in the cave exactly beneath the center of the pyramid above are two figures, male and female, believed to represent First Man and First Woman.

Petroglyphs in the Brazilian rain forest, marking Summer and Winter solstices, are believed to the earliest art surviving in the Americas.

This documentary really resonated with me on many levels -- I have no Native American ties but I share their reverence for of nature and the sense of finding the right place and staying there. Their fascination with the sun and its path is also familiar. I've been paying attention to where and when the sun rises for over forty years now -- ever since I had a clear view of the horizon. 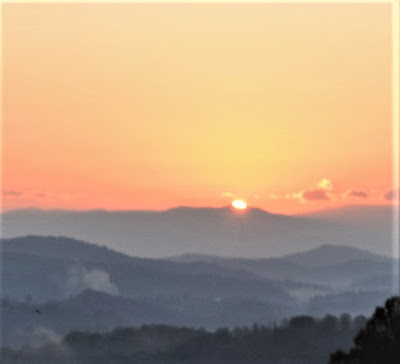 Thank you for the link. I so rarely watch television that I miss things I would enjoy. Now that tab is open next to my Book of Kells tab!

We don't watch any TV, Karen --at least not until basketball season when John follows the Tar Heels. So I was thrilled to have this link.

Isn't this the greatest show? Their press release is so mundane compared to the actual content. Glad you're passing it along to all your followers!

It is indeed a great documentary. Just amazing!

"...reverence for of nature and the sense of finding the right place and staying there..." Good guidance, this topsy turvy world being as it is.