Miss Birdie in the Graveyard -- Dolly and Alonzo 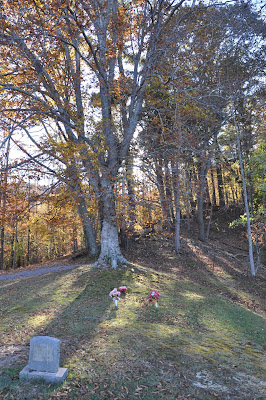 Well, what's a-gonna happen! Here I was thinking you'd forgot about Halloween, busy as you've been these days. Why, yes, I'd be proud to ride with you up to the graveyard. I got my basket of spice cake all ready. Come on in and git you a chair whilst I find my warm coat -- they's a right sharp breeze a-blowing  out there. 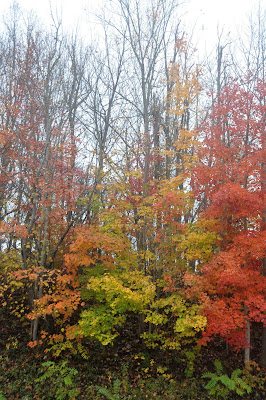 Law, seems to me this old road gets steeper every year. I clumb it last Decoration Day and like to give out before I got to the top. Don't reckon it's along of me being up in my nineties now, do you? Still and all, at least I'm here and have a good friend to ride me up this old road.

Now I'll set my bits of cake on the headstones and have a word with the folks while you do your picture taking. It's a sight on earth, seeing how that last bit of sun lights up the hillside, most like a blaze of fire. 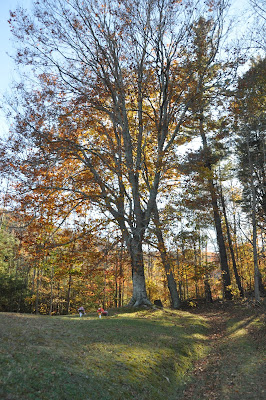 Well, there's a job done. And a little of the cake left for me and you. Let's us rest here on this log bench Bernice's boy set up for the old folks last Decoration Day.

I know you're looking to hear a story about these folks up here and I been puzzling on just what story I could tell you. Then I remembered about one who ain't here. I can show you his first stone though .

It's right over this way, that homemade white painted  concrete marker. Alonzo Amos Gentry -- yes, he was of Luther's kin and no, I didn't forget about the cake. I told you, he ain't here. 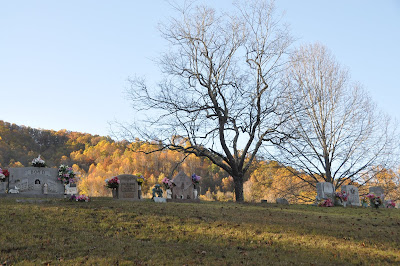 Part's crumbled away but you can still make out the words --A. A. Gentry - CSA - 1838- 1865. His folks set it here when they got word he'd been killed in some kind of explosion at the tail end of that bitter war. Later his comrades told the family they never did find his body, that he'd been blown to bits. But his mama she wanted to have a marker to put flowers on and where she could set and grieve.

Alonzo was conscripted by the Confederates, though like many a one round here, he went unwilling. And especially because it meant leaving the new bride that he'd waited so long for and the little home he's built with his own hands.

He was twenty three and Dolly just fifteen years of age when they wed, but Alonzo had been in love with her since he could remember -- the families had been neighbors and he had singled out Dolly for hisn by the time she was nine or ten.

It ain't common for a great boy to pay much mind to a little girl. "But she was the prettiest, smartest, bravest little thing that ever there was," he said, "with a smile that could break your heart."

He said the other fellers laughed at him for being so backward and not taking up with one of the likely girls that was closer to his age. But he was sure as sunrise that him and Dolly was meant for one another.

"Even when she was just a little thing," he said, "she would put her hand in mine and stare at me so solemn and wise, like we'd always known each other."

Alonzo was set on marrying his Dolly but, though her folks like Alonzo fine, they said Dolly couldn't marry till she was fifteen. So Alonzo waited, working harder that anyone you ever saw to build a little cabin on some land his daddy gave him and to make a home for him and his sweetheart. For three long years, Alonzo sharecropped and worked on that cabin, building furniture and a barn and chicken coop, and clearing land for his own crops and all the time putting money by for his Dolly.

And right along, Dolly was weaving and sewing and making quilts and such for their life to come. Her and Alonzo had to do all their courting under the eyes of both families, both  mamas being right strict. And when at last they married, on the very day of her fifteenth birthday, they moved into that little cabin, made homey with the pretty quilts and things them two had made whilst waiting.

Now this was just afore North Carolina got into the war. And at first, those two lovebirds thought the war wouldn't touch them. But then Alonzo was conscripted.

Dolly wept her pretty eyes red and clung to his arm but there was nothing for it -- Alonzo marched away with her last words ringing in his ears. "I'll keep a light burning in the window every night," said she, "to make sure you find your way back to me."

Yes, it was sad when news come that Alonzo had been killed in an explosion and Alonzo's death. His mama took on till they thought she'd pass away of grief but Dolly bowed up and swore that he wasn't dead. And every night, she'd light a candle and set it in the window. When candles was hard to come by, she'd use a tallow dip. Long years later, she had a kerosene lamp setting on a table by the window and she'd light it at sundown.

How long did she do this? Well, it must have been fifty or sixty years. She'd lived alone all that time in that  little cabin Alonzo built, getting by on what she could grow and with some help from her family. By then folks was used to seeing that light and though some called her Crazy Doll and young uns was scared of her, believing her to be a witch, she held her age right well, keeping all her teeth and her pretty ways -- and more than one old widow man went sniffing round her door.

I never knew her but Luther remembered her -- she was some kind of cousin to him though he called her Aunt Doll -- and he said she had the sweetest smile.  And he remembered the commotion it caused the first night Dolly didn't light the lamp in the window.

The folks who lived across the way from her cabin always kept an eye out for Dolly, and the light was their way of knowing she hadn't been took sick or maybe taken a fall-- this was in the early Thirties, I believe and Dolly would have been in her eighties.

So when it got to be black dark and still no sign of the light, the folks across the way hurried down to the little cabin, fearing the worst.

When they neared the cabin, they saw Dolly setting in a chair on the front porch and heard her laughing -- like silver bells, it was, one of them told Luther's mommy.

"Miss Dolly, are you all right?' they called out. "You didn't light your lamp and we-"

"I am better than all right," she called back, her voice plumb rippling with gladness. "Alonzo has come home!"

And then they saw there was a feller setting in the chair next to hers and a-holding her hand.

Now these neighbors truly loved Dolly but they was afraid that she had lost her mind -- it ain't uncommon at that age --  and that some scoundrel who knew her sad story was aiming to take advantage of her by claiming to be Alonzo. Her little farm wasn't much but it could have been tempting to one of the hoboes that were beginning to drift through back then.

And so they come on to the porch to have a look at the rascal.

He stood up as they climbed the steps and gave them a howdy. He looked kindly dazed, the folks said when they told the story later, and was wearing what looked like an old- fashioned uniform, worn and dirty, to be sure, but not old
iffen you know what I mean.

"I thank you kindly for looking after my Dolly," he said. "But I'm back at last." He looked down at her soft wrinkled old face smiling up at him and brought her hand to his lips. "Seems like we've spent an awful lot of time waiting on each other."

Just then the full moon begun to rise and in its light, the neighbors saw that he was a handsome young man, not much above thirty and the spitting image of the tintype picture Dolly had had on her mantel as long as anyone could remember.

Law, feel that wind! If you don't care, honey, let's us get on back to my house and I'll tell you the rest of the story while we have some hot peppermint tea to ward off a cold.

(to be continued tomorrow) 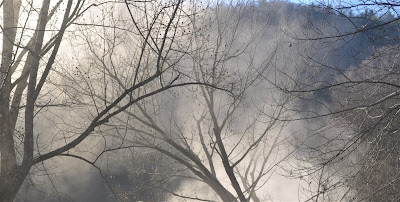 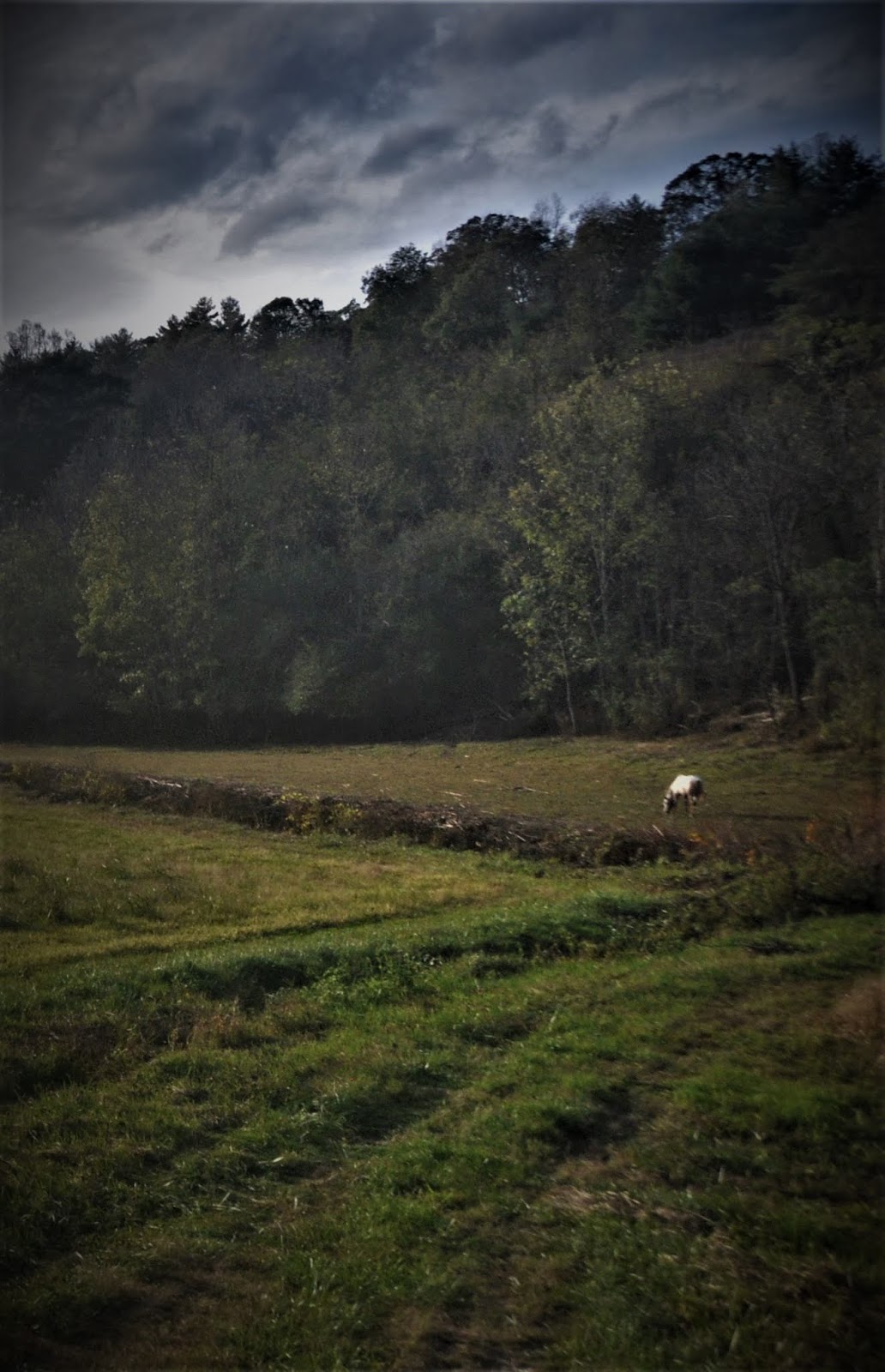 Waiting eagerly to turn the page.

Can hardly wait til tomorrow!

Love hearing that story...and then seeing that last photo...looks moonlit for sure!

How wonderful to visit again with Miss Birdie. I am really looking forward to Part 2.

Well Ms. Birdie has got me hooked. Let's hope she tells the rest.