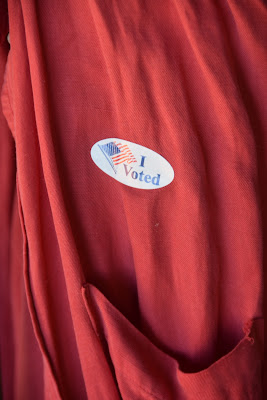 Yesterday was the opening day of early voting in North Carolina and I was there. It was a chance to do something in the face of the helplessness I've felt as our country teeters ever closer to a complete surrender to fear and greed and racism.

Children in concentration camps (run for profit by Republican allies,) environmental regulations falling right and left, civil liberties endangered, Medicare, Medicaid, and Social Security in the crosshairs as the government looks for ways to offset the huge loss of income due to the tax cut (which mainly benefitted the wealthy,) gerrymandering and questionable purging of voting rolls to favor the party in power, and a president* whose go-to offense is name-calling and lying and who appears to have a thing for strong man dictators -- these are a few of my unfavorite things. 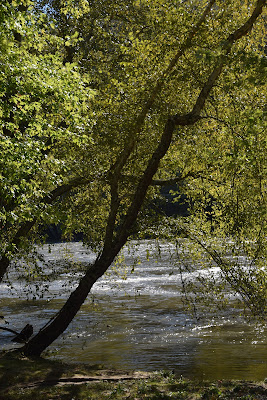 I often express my frustration on Facebook, posting op-ed articles or memes that echo my feelings. Most of my commenters are of like mind but I get the occasional troll type and I have a few remaining FB 'friends' who are of the other persuasion.

Yesterday I posted a meme that drew comments and rebuttals from both sides and, after posting a rebuttal myself (in the form of a link to a fact-check article,) I commented that I needed to stop engaging with these folks and just say "Bless your heart," that all-purpose comeback with as many meanings as one cares to assign.

And then a little war of Bless your hearts broke out between the two factions. 'No, bless your heart. And I mean it sincerely.' Kinda charming, in a way.

But thoughts and prayers and blessings aren't going to help a thing if folks don't go vote. I usually vote early because of the convenience, but this year, with horror stories abounding of people being purged from the rolls or turned away for lack of the 'correct' ID, I think voting early to make sure you can is a wise idea.

And it just feels good. 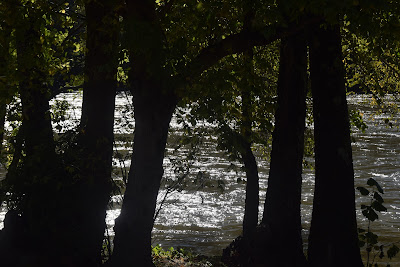 Email ThisBlogThis!Share to TwitterShare to FacebookShare to Pinterest
Labels: vote

Good job...I missed yesterday, and a lot of friends I ran into had their "I voted" stickers proudly displayed. My favorite moment was around 5:30 when driving past the town square and seeing 3 people waving signs (which makes it harder to read them). They were saying things like "Only Love will ..." and I missed the last of that one. And "Love is the Way" and something else about LOVE. Oh yes. What great people to be expressing such hope...and in such a universal way. I made the sign of "I Love You" from American Sign Language and waved back at them. I couldn't tell who they were, because I was driving, (and reading) but they waved back.

" ... I have a few remaining FB 'friends' who are of the other persuasion."

This I don't understand. Oh, I can understand why some are more conservative than others, but to still stand up for this particular government is beyond me.

HE is the most vile human being I have ever witnessed. Just plain crooked and dishonest all for his personal benefit. Vote him and his followers out of office!!!!!!!!