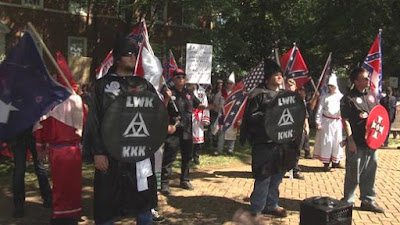 This is where we are now. This is what the Trump regime has empowered.

Armed idiots, waving Confederate flags, wearing KKK robes and hoods, and sporting White Supremacist gear gathered in Charlottesville to protest the removal of a statue of Robert E. Lee (who was an avowed enemy of the United States and the American flag which these folks also waved, oblivious to the irony.)

Michael Von Kotch, a Pennsylvania resident who called himself a Nazi, said the rally made him “proud to be white.”
He said that he’s long held white supremacist views and that Trump’s election has “emboldened” him and the members of his own Nazi group.

“We are assembled to defend our history, our heritage and to protect our race to the last man,” Von Kotch said, wearing a protective helmet and sporting a wooden shield and a broken pool cue. “We came here to stand up for the white race.”

It should come as no surprise that this sort of deplorable person feels empowered by Trump. Trump seems unable to bring himself to speak out against the White Supremacists and Klansmen -- they're among his strongest supporters, as David Duke reminded him yesterday. 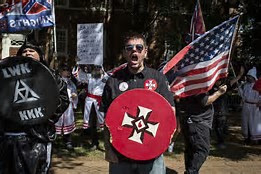 And it should come as no surprise that many good and decent people should have assembled in counter-protest. When evil like this, evil that threatens the basic decency of our country, is on the march, thank heavens for those who stand against it.

There were over a thousand people gathered to say that White Supremacy has no place in Charlottesville, no place in the USA. 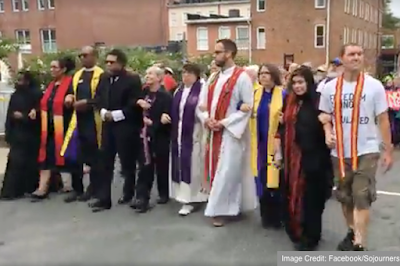 Among those who showed up to protest the hate rally was my sister-in-law Fay -- a  resident of Charlottesville and a gray-haired grandmother like me. She was there, bearing witness, when a car rammed into a crowd of counter-protesters, killing one and injuring many others. (Fay got home safely, thank goodness.)

Desmond Tutu said: "If you are neutral in situations of injustice, you have chosen the side of the oppressor."

Fay, thank you for choosing to stand up against hate. 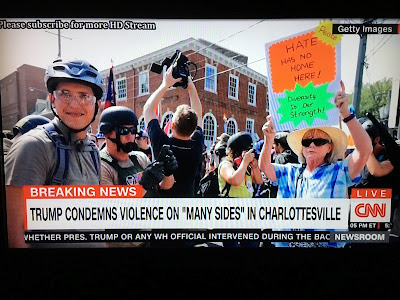 A quick glance in the mirror should reveal to themselves that they are no master race.

I'm urging everyone to write or tweet to all 100 senators and all 435 reps that it's time to remove DT from office before he causes or does any more damage. I would really urge everyone else to do the same. It's easier to to do than it may sound, and it could really motivate Congress to take control of the situation. If senators and reps know numbers and numbers of people feel that way (and thus votes are on the line) they'll do something.

PS: I'm glad your sister is safe, Vicki! Now she's on my hero list, too.

Your sister in law is indeed a brave citizen. These yahoos were armed, mad at the world in general and likely to do anything. We will all need a good helping of that bravery in the coming years.

Good for Fay, glad to hear she is safe. Yes, making our voices known is important. Standing up to hate is difficult, especially to not give hatred back, but to show those who think that that is power the truth that power comes from the heart, from loving one another. Behaviors are not condoned, and must be punished, but people also must be shown why hatred doesn't work in our lives.

This made me sick to my stomach, unfortunately it was only a matter of time. Trump won't say who has done this evil, they are part of his base.
I am sorry your sister had to witness this but honestly Vicki if I lived in the area I would of been there as well. (I'm glad Fay made it home safe and so proud she stood on the right side of history)

Your sister-in-law is my hero as well. We all need to speak up loud and strong against this and encourage everyone we know to do the same.

Your sister-in-law is a stand up person. As to the retards that think 1860's are back again, it tells you volumes about how truly backward they are.

Amen to all these comments Vicki and to your post. Last night somebody told me that people on the internet have a new name for this POTUS: Twitler.