Yesterday and a Farther Yesterday

We have gone the better part of two miles when the sergeant calls out an order and our column turns up a steep trail into the woods. I am puzzled for it ain’t the road to Greeneville. We march a little farther and the sergeant calls a halt near a dry branch, a kind of shallow ravine. I am smiling for I figure Old Keith has got hisself turned about somehow.

Everwhat the reason, we are all happy for the rest and are standing easy. I reach for the journey cake the idiot girl pressed into my hand afore we left and take a little bite. It tastes like home and I am trying to decide whether to eat the whole thing now or save a bite for later, when I see the prisoners being marched to near the little ravine. Then Sergeant Jay passes down the column, calling out one after another of us. I am the sixth to be called.

He forms us into a squad, marches us over and lines us up at attention not ten paces from where the prisoners is standing, Colonel Keith is setting on his horse a little ways off, watching all this with a stony cold face. He raises his hand and Sergeant Jay motions five of the prisoners apart and tells them to kneel there at the edge of the ravine. They are beginning to swivel their heads wide-eyed from side to side and I see the same look dawning on their faces that comes to a beast being led to the slaughter.

Our squad is put at Port Arms and then at Ready. We are holding our rifles aimed at the prisoners. I tell myself this is more of the colonel’s meanness, like pretending to hang the women. He is holding a mock execution, meaning to scare the prisoners  till they shit their britches.

One of them who is  kneeling, a white-haired old man, holds out his hands all a-tremble and hollers, “For God’s sake, men, you ain't going to shoot us.”

He looks over to the colonel who makes no sign. The poor old man clasps his hands together and calls out in a piteous voice, “If you are going to murder us, give us at least time to pray!”

“There is no time,” says Keith, in a voice I hardly recognize. If the Devil hisself was to speak, I reckon it would sound like the colonel. “Sergeant Jay, proceed.”

The sergeant is enjoying this. He stiffens, raises an arm, and calls out the Ready. We have our rifles to our shoulders and I cut my eyes to the feller beside me. His face is sickly white and his lips are tight pressed together.

“Aim,” cries the sergeant and our whole line of rifles wavers then steadies. Most of the prisoners have their hands over their faces and I wonder are they praying or are they trying to hide from the bullets. I can see the colonel from out the corner of my eye and I am waiting for him to call this off and let us get back on the way to Tennessee.

But he don’t utter a word, just sets there watching.

“Fire.” shouts the sergeant, his hand slicing down through the icy air.

And the whole line of us stand there frozen. It’s one thing to kill a man what is shooting at you. But it’s right awkward when that man is kneeling on the ground before you, praying or begging for mercy. A many of the prisoners had been neighbors of some of the men of the 64th and some was even members of Company A before they ran.

One of the deserters calls out, “Shelt Ray, Sol Carter, can youns shoot your old comrades in cold blood?”

At this Colonel Keith pulls his side arm and points it our way, sweeping it back and forth. “By God,” he shouts, “fire or be fired on, damn you all. Fire or join the prisoners.” 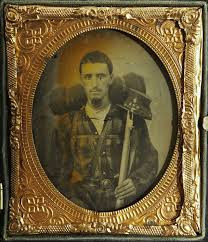 I spent most of yesterday morning with my work in progress,  writing the chapter that deals with the massacre at Shelton Laurel in 1863. It falls about two-thirds of the way through the book (there's quite a lot leading up to the massacre and quite a few repercussions following) and it is the hinge on which the entire story hangs. I've worked on this story for about five years now, reading and researching and trying to absorb the various points of view.

It's taken a while for me to feel comfortable in the heads of my various characters and to understand their motivations. I've skipped ahead, writing scenes and even chapters that occur in the aftermath of the massacre, avoiding the pivotal event because it wasn't coming to me.

But as I wrote yesterday, following the various historical accounts but speaking through the eyes of my fictional conscripted soldier, the story began to unfold, telling  itself just as if I were watching and recording events.

And when I finished the chapter and hopped over to Facebook for a break, I was met with a posting on the page for Descendants of the Shelton Laurel Massacre, noting that it was the anniversary of that long ago event -- January 19, 1863.

Is that the music from the Twilight Zone I hear? 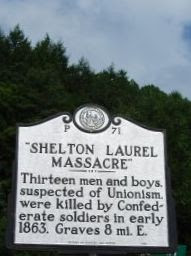 Ironic that you posted this and I just finished reading another blog I follow... http://ashevilleandbuncombecounty.blogspot.com/2016/01/shelton-laurel-massacre-by-david-l.html

Wow spooky. So sad a story, all that human suffering . Walking through a Chicago cemetary that has many civil war dead. I felt the same uneasiness looking at their graves. What stories are buried there ...human stories. Can't wait to read your book

Keep on working, Vicki! What an event to spend so much time researching, and I know there are different opinions about it...can't wait to read your book!

The Shelton Laurel story is both cruel and fascinating. A true example of brother against brother. Amazing coincidence that the chapter comes to life on the anniversary of the deaths.

That was a pretty riveting snippet.

You keep whetting my book appetite. All I can say is hurry and thank you.

My admiration of your research for accuracy and setting the right tone in dialect and character is great. Thank you and cannot wait to read this historical story.