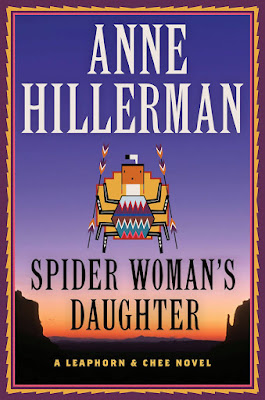 I am a long time fan of Tony Hillerman's Leaphorn and Chee novels. I love the wise Joe Leaphorn as well as the younger, often conflicted Jim Chee. The last few novels of the series, written when Hillerman was in failing health were a bit disappointing but still worth the read, just to be back with old friends, enjoying the wonder of Navajo Country with its stark beauty and towering thunderheads sweeping over the Chuskas.

When Hillerman died, I was sad to think there would be no more of Leaphorn and Chee. And when his daughter took up the series, I was wary, fearing a disappointment. 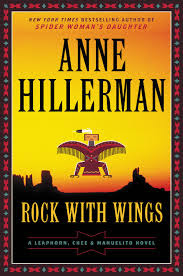 But recently Anne Hillerman's Spider Woman's Daughter, the first in her continuation of the series, was a blue light special on Kindle and I succumbed, curious to see how she would treat my old friends.

I was very pleasantly surprised. She astutely shifts the focus to a secondary character from the previous books -- Officer Bernadette Manuelito, now Jim Chee's wife. Bernie was already well established but Anne Hillerman adds depth to this likable young woman. Chee is well handled, and Joe Leaphorn, my favorite, is off stage, incapacitated.

This seems to me a clever move -- rather than trying to channel her father's chops, Ms. Hellerman eases her way into the Leaphorn/Chee world with some new moves and deft plotting of her own.

I quickly finished Spider Woman's Daughter, thought about seeing if our public library had a copy of Rock with Wings, Anne Hillerman's next in the series, and gave in to instant gratification and downloaded it so I could stay in my old friends' world a little longer.

It's even better. And Joe Leaphorn is making his way back nto the story. Brava, Ms. Hillerman! I look forward to many more Leaphorn/Chee books from you.

The picture below is from the site HERE. 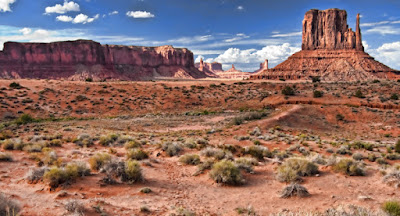 Oh yes, I'm so thrilled to return to these characters and settings! Thanks for your review!

Thanks to your walk down memory lane and the new, I have another series of books to explore. And the good news is that beause of the age of these books, I can download them from the library without waiting for them to become available. Thank you once again Vicki.

Fully agree with your sentiments. Now am anxious to read the second novel, and watch Leaphorn's recovery. Love the Hillerman (father and daughter) view of our majestic Southwest and its people.

I love The Hillerman authors. She really adds to the richness of the characters and plots her own way. Turn your beacon toward SHIP ROCK and rest in the Navajo matriarchal society.