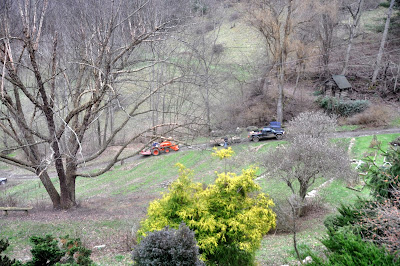 After lunch yesterday I headed out the door, bound for the grocery store, only to hear the sound of tires grinding in the mud and gravel of the (steep) road by the garden.

Jehovah's Witnesses, I thought and began composing a polite but firm speech of dismissal. (I always think of snarky things to say but never actually say them.)

Then I realized that the truck on the driveway wasn't making progress upward and that it was towing a long trailer of firewood. (Note to JW's: if you brought us firewood, we'd probably listen to your spiel before politely dismissing you.)

When I got closer I could see that the trailer had partially jack-knifed off the road and that the truck was unable to pull the heavy load any farther. 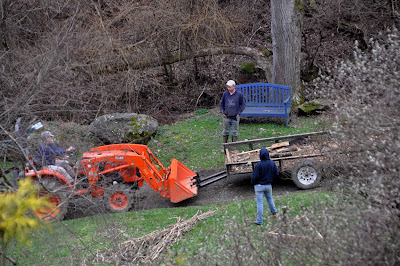 The driver got out. "I must of taken the wrong turn," he said. "This wood is for a lady up on Rabbit Rock Road."

"Yes, you did," I said. You turned just before Rabbit Rock -- it's in the next holler."

It was obvious that help was needed so I called John. After studying the situation, he suggested that the trailer needed to be unloaded so that it could be straightened out and backed down the road. 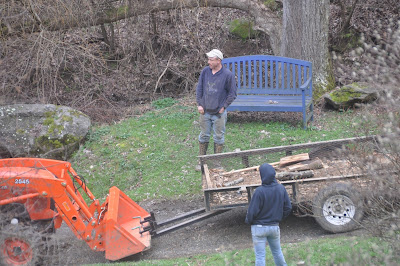 And that's what happened. John went and got the Kubota utility vehicle and the wood got loaded into it and taken down to the lower place --- several trips. Then John brought up the tractor and used the hay spears to lift the rear end of the trailer out of the garden and onto the road.

(Several hours had passed since I had headed for the car to go to the grocery and I revised my plans. The grocery could wait till morning.)

There was a slow careful backing down the road and an eventual re-loading of the trailer. I felt sorry for the poor guy whose truck's 4 wheel drive had broken and who was on the phone explaining to his wife why he wasn't home yet.

But he was lucky that John was on hand with his tractor and utility vehicle.

And we were lucky that he wasn't trying to talk to us about the Bible and press a Watchtower into our unwilling hands. 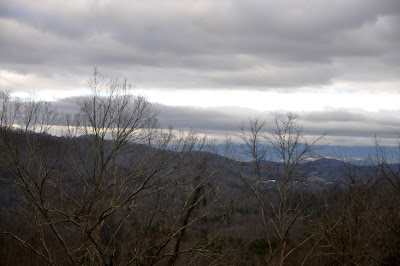 I'll bet that guy was glad to have John around!

That's what mountain living is all about. Changing your plans to help someone out. Even if the someone's stupid mistake led to all the trouble.

Good neighbors you are!

Sometimes you wake up in a morning, and there it is, the most surprising unexpected thing...though perhaps not earth shaking!

You gotta admire a man who would attempt backing down a Madison County gravel driveway with a load of firewood on a light trailer. That's chutzpah!

You have witnessed to us about the event. That counts.

The last time Jehova Witnesses came round our place, Jim just happened to be sitting on the porch cleaning his gun. They haven't been back since. Years later I discovered my hair dresser was a JW. I went to her for a long time before I knew, so obviously she was low key about it.

They guy was very lucky you guys were able to help him. Too bad the wood wasn't for you!

I see what you did there, AC.