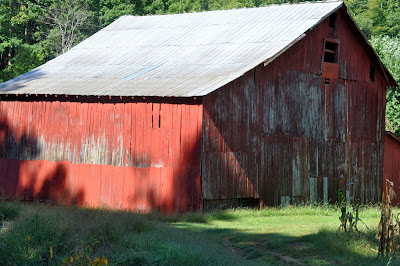 Red barns aren't as ubiquitous here in western North Carolina as in other parts of the country. Unpainted barns were the norm for a long time. Still, that iconic red barn of children's books and country-themed calendars tugs at many of us. Our own red barn was unpainted for many years . . . and then John bought a spray painter.

I love the weathered gray of many old barns.  But the way that red pops against a green background is nice. And the paint adds protection to the wood. 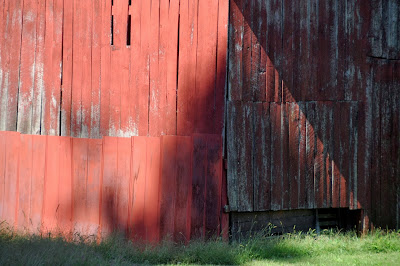 A little on line research reveals that the red paint may have originated in New England in the late 1700s when thrifty farmers, seeking to protect their barns' wood from the weather  began experimenting with ways to make their own protective paint.

One mixture of skimmed milk, lime and red iron oxide created a rusty-colored mixture that became popular among farmers because it was cheap to make and lasted for years. Another preservative was linseed oil, derived from flax seed -- and flax, grown for linen, was a common crop. It was found that adding rust to the linseed oil created a nice rust-red finish to the wood. 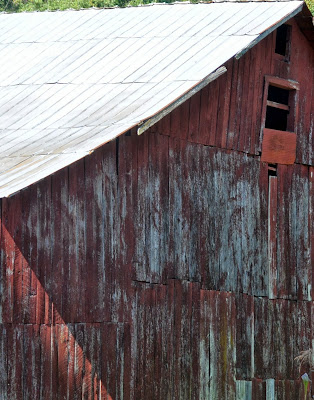 What color are the barns where you live? If there are barns . . . 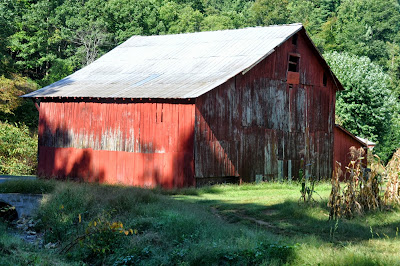 Email ThisBlogThis!Share to TwitterShare to FacebookShare to Pinterest
Labels: barns

What a beautiful red barn, both in shape and colour. It sits so happily in the landscape.
We have red barns in NZ too and I always love to see them.

(I loved your post "Thoughts on the Edge of Madness," agree completely).

Not many barns in my immediate area, only storage buildings shaped like barns.

made with skim milk....really? that is very interesting....i do love the color so i am glad it caught on...smiles...

Most are red here, but more than you'd expect are forest green. Very very few white ones.
I love barns, mostly for their scent.

Barns here tend to be red or unpainted. I've seen yellow ones. In the Kentucky bluegrass, they're now painting them black.

Brian -- milk paint was a standard for furniture too -- it's still available in powdered form for those wanting an authentic look to thier early American furniture.

Forest green? Don't think I've ever seen that. I have seen some white barns. And the idea of a black barn is completely depressing -- seems like it would be way hot in summer. Yellow sounds nice and cheerful.

I wonder if somewhere there's a purple barn?

Ahh Vicki, not too many barns around here, but I do very much like the looks of your Indian Grave Gap Road barn. I also like the idea of farmers making use of rust in the paint mixes devised to help protect the wooden sides of their barns.

Nice photos! You ask what color barns exist in our areas. As I am new to the area I cannot say. However, I did a little research and found some very good general info about barns in the state of Washington. The info is located on state's Heritage Barn Register located at: http://www.dahp.wa.gov/heritage-barn-register

They gave these colors for the barns on the register. Mostly red and not-painted in second place with the colors of white, grey, yellow, brown and green following.
-- barbara

Iowa has few barns left that are made from wood but those usually are either red or white. The do have new tradition of paint a large quilt piece and placing at the peak of the barn.

I haven't seen the yellow barns here in the KY Bluegrass, but aside from fancy horse barns, farm barns seem to be black like the rail fences. If they are painted. There is a quilt trail here which is interesting. A different quilt square hanging on each barn.

More and more barns around here are putting up those 'barn quilts' -- very attractive.