An Exaltation of Larks 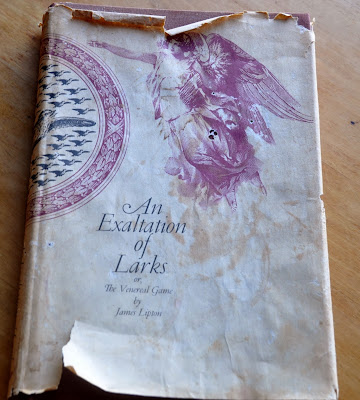 After yesterday's post (a murder of crows,) some one asked me on Facebook about the origin of these collective nouns, and I went and hauled out this delightful book that gives (and illustrates) many such nouns. An Exaltation of Larks by James Lipton is still widely available and I recommend it to anyone who loves words

Many of these words date back to the 14th century and were terms of venery (hunting) as in a  covey of partridges or a husk of hares..

The illustrations are gorgeous... 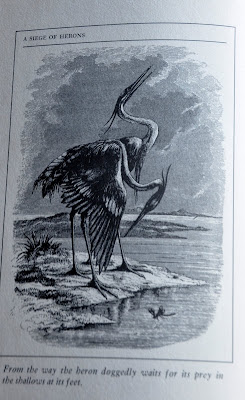 And it's great fun to try to understand the reasoning behind some of the names. 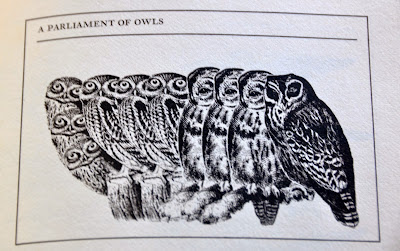 Not all the terms are from hunting -- a sneer of butlers, for example, 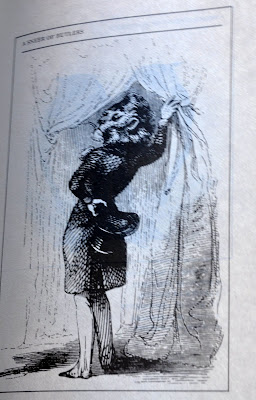 Or an odium of politicians -- that one sounds positively contemporary... 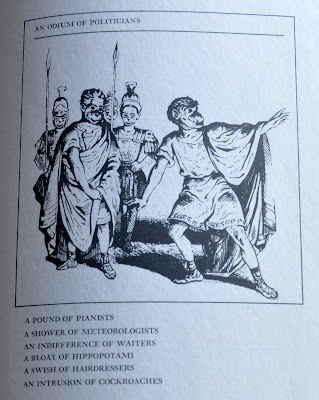 Then there's  a worship of writers -- and note that the worship is "probably a reference to the reverence of writers for their patrons and not, alas, vice versa."


As always, these names inspire me to invent new ones -- what about a MacGuffin of mystery writers? (According to Wikipedia, a MacGuffin is a plot device in the form of some goal or desired object that the protagonist pursues often with little or no explanation as to its importance.) 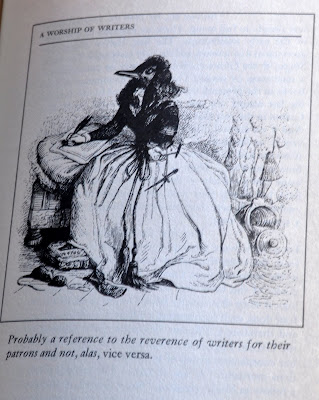 I found that I had added at the back of the book terms for dog breeds I was familiar with -- a shed of Akitas, a loom of mastiffs, a bounce 0f Australian shepherds . . . 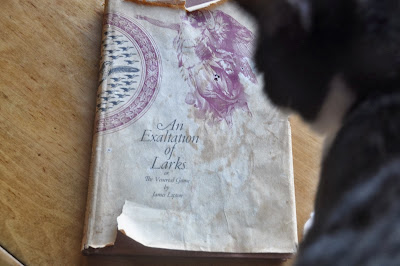 The kittehs were interested to know what their collective noun was and we found a kindle of kittens and a clowder of cats.

They were not impressed.  I think I would suggest a smugness of cats.


What about you?  Any profession (a shush of librarians,)  any trade ( a torque of mechanics,) any condition of life (an ambush of widows) is fair game.  And while this book has covered the ground pretty thoroughly, it was published in 1968 -- surely there are some new categories awaiting names: feng shui consultants, computer programmers, IT technicians, Reiki practitioners, massage therapists, manicurists, aestheticians, pet sitters, recyclers ... what can you think of that needs a name? 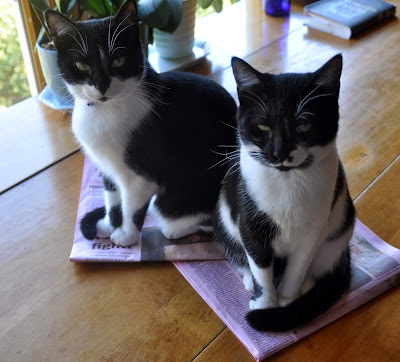 Email ThisBlogThis!Share to TwitterShare to FacebookShare to Pinterest
Labels: An Exaltation of Larks, collective nouns

A glitch of computer programmers.:-)

I'll have to do some pondering on this one!

A tantrum of toddlers.

A hazard of drivers.

A smear of painters.

Or maybe a palette of painters?

ha. cool...and sandras is funny to start too...

A cackle of cartoonists.

Not inspired to come up with one...yet. You've planted a seed however.

I did some googling on this subject and found this interesting interview with James Lipton about his book. Worth checking out: http://bigthink.com/videos/the-exaltation-of-wordplay Did you know he made up some of the words?

A wellness of health educators

Jean -- yes, Lipton did make up a lot of the words -- the ones about animals are, for the most part, traditional and very old. But I suspect that sneer of butlers, for example,was his.

The book is still widely available and lots of fun to read.

A patience of IT support staff ...--Mario R.

A clamor of students.