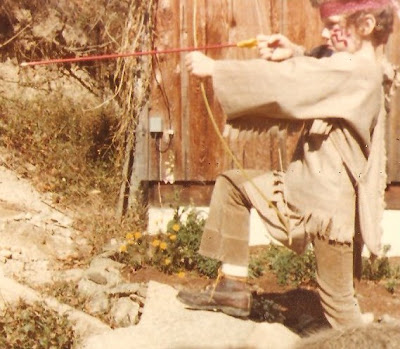 This is seven year old Ethan in a hastily constructed Indian outfit (with matching quiver.) I imagine this was in the back of my mind when I had Elizabeth make Indian costumes for Rosie and Maythorn in Old Wounds.

My boys were great ones for costumes -- dyed long underwear made superhero costumes; my old wraparound skirts turned into cloaks for adventurers -- who skirmished with wooden swords and shields constructed by their father. Once Ethan spent half a day drawing neat circles in indelible black marker on a long underwear shirt to make 'chain mail armor' for his little brother.

That imagination hasn't gone away. Ethan makes his living as an editor and developer for White Wolf Role-Playing Games -- coming up with new ideas for said games and overseeing and contributing to the production of various titles such as Changeling:The Lost, Tribebook- Silent Striders, Mage, Predators, Vampire:The Dark Ages. He has a list of credits longer than Plastic Man's arm -- and in the world of role-playing games, he is a definite Somebody.

Just recently Changeling swept the awards at a role-playing games convention -- taking gold in every category for which it was nominated. Ethan and his wife Aileen (who is an art director for the same company -- convenient, that) were kept busy accepting medals and making thank you speeches.

I'm taking some credit here -- it was I who long, long ago introduced Ethan to his first Dungeons and Dragons game, never imagining that he'd end up making his living this way.

Nor was I imagining that his Indian costume would turn up in a book of my own!

Wow, that is incrediably impressive! It is so wonderful when someone can use their talents and gifts to 'earn' a living. And to be so obviously good at it. I think being able to have a fun and imaginative child hood goes along way to culivating that wonder into adulthood. And I love the Indian costume. :-)
Tammy

Funny note: When I was a kid, I remember hearing that D&D was a satanic game. There were stories about how parents had burned their kids' game pieces and heard screams coming from the flames. People are so funny...

Yeah, I remember hearing those "satanic" rumors about D & D. Same mindset as the folks who want to ban Halloween and Harry Potter. Actually, I find this more scary than funny.

Hopefully people like that will never prevail. Those of us who feel differently just have to make sure we are loud enough to drown them out. (I know I have a big mouth.)