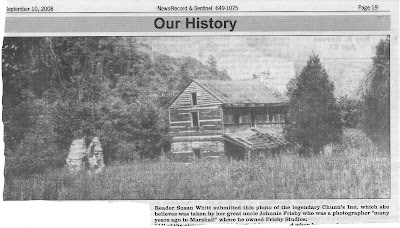 This historic photo showed up today in our county's weekly newspaper -- one of the stock stands on the old Drovers' Road near the end of its days. It's gone entirely now, but for the foundation stones.

But while it stood, like my mythical Gudger's Stand, the house was the stuff of legends. For one thing there were the brown hand prints on floor and ceiling --they looked like dried blood but couldn't be removed, so it's said, even when a carpenter's plane shaved away layer after layer of wood. 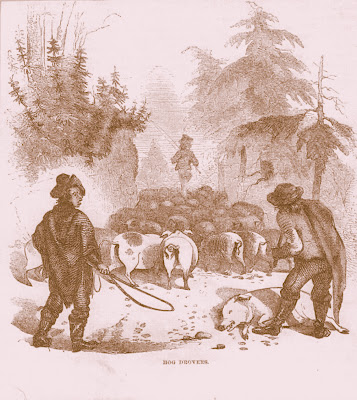 They still talk of Chunn's Inn, rumored to be the last stop for many an unwary drover returning home with pockets full of gold. and this is the story they tell.

A drover, riding home from markets to the east, stopped at Chunn's Inn for the night. Perhaps he drank too deeply; perhaps he spoke too freely of the good price his beasts had fetched; whatever the reason, the drover slept fitfully that night, his pistols close at hand. He seemed to hear footsteps or the doorknob turning and would start awake as soon as ever he drowsed.

When morning came at last, he breakfasted, bid farewell to the company, and resumed his journey along the river road. 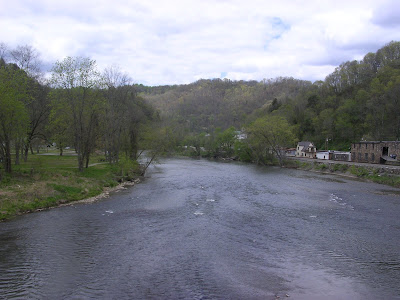 In spite of his restless night, the drover rode cheerfully, thinking of his return home. The way was lonely, with not another soul in sight and he sang and whistled to pass the time.

Suddenly the horse shied as a dark figure stepped out of a laurel thicket above the road and leveled a pistol at the drover's breast. The bandit's black face contorted in an ugly scowl as he demanded that the drover halt and throw down all his money.

Thinking quickly, the drover reined in his horse and tossed a handful of silver into the dust of the road. When the highwayman bent down to retrieve the coins, the drover pulled out his own pistol and fired.

As the robber fell to the ground, the drover, fearing the man might have accomplices, wheeled his horse and galloped back to Chunn's Inn.

Mrs. Chunn was in the doorway as the drover pulled his lathered horse to a stop, shouting out that he'd killed a Negro highwayman.

Interested bystanders went to see for themselves -- there on the road, sprawled dead as a hammer across the coins, was Alfred Chunn, his hands and face blackened with soot. When they brought the body back to the inn, Mrs. Chunn was nowhere to be found -- but investigation revealed a small back room where blood stains and a chute leading down to the river gave evidence of the Chunns' murderous ways with their moneyed guests 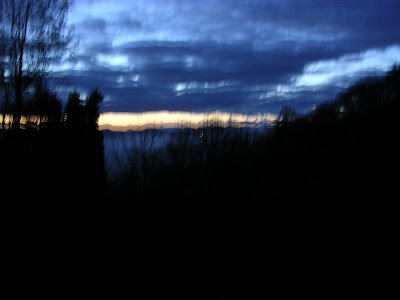 I'll be at the Carolina Mountains Literary Festival tomorrow and Saturday -- no posts till Sunday!

What a fascinating story! I can see where you got some of your 'fodder' for your book. It's amazing the deep and interesting history that surrounds us, if we only listen. I'm glad you are capturing some of that in your books!
Glad to have you back, by the way--even if you haven't posted about your trip yet! :-)
Tammy

Working on my post right now! I started much earlier and had a very welcome interruption, which I'll explain.

Yep, the stories are everywhere!

Even though I've lived in the area for years, such stories are still so interesting to me. Thanks for sharing once again.

Oh my goodness! I'm so excited to see this entry. My uncle tells this story, which he learned from his grandfather, here in Madison County, NC. I hiked down the railroad tracks this past Thursday, and found the site of the Inn, and took some pictures. It's amazing to learn that other people know the story...and to see the variations in how it's told! I look forward to reading more of your blog!

Welcome to the blog!

Do I know you? -- I'd love to hear your uncle's version. And to see your pictures, as well.

My apologies for just now answering this! You can see my family's version of the story, with my pictures, as http://asmallcafe.blogspot.com/2008/10/chunn-house.html. Please email me at estajarrett at gmail dot com if you'd like to exchange stories!