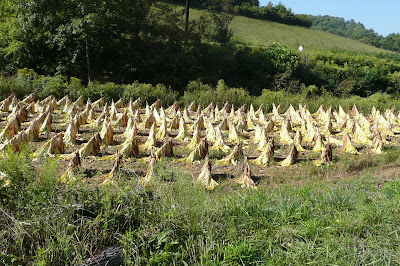 Is it some lovely ceremonial dance with ladies in long gowns sweeping rhythmically to and fro? Nope, it's tobacco, waiting to be barned. Not ours (she said with a sigh, half relief, half nostalgia)-- we don't raise tobacco anymore.
A few days ago these tobacco plants were cut and slid onto sticks, five or six plants per stick, then left in the fields to wilt down, rendering the yellow-green leaves less 'brickle' and liable to break, as well as considerably reducing the weight of the laden stick.
Back when we were making our first crop of tobacco, Clifford (our mentor) didn't approve of leaving the cut plants in the field, saying that the leaves weren't as pretty when faded by sun and spattered by dirt. Also, it was easier that way -- a shortcut for a lazy man. And Clifford was not a lazy man. So we did it his way for a few years, cutting in the morning and barning in the afternoon.
Back-breaking work -- but then the system changed and instead of making the leaves into 'hands', another labor-intensive practice, farmers were encouraged to bale their leaves -- and pretty didn't matter so much.
We switched to the lazy-man's way at once. 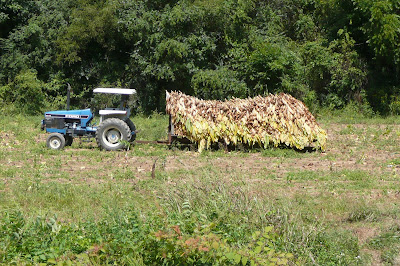 Rain may be on the way, fueled by Hurricane Hanna, so the tobacco is ready to be hauled to the barn where it will hang to air-cure for several months before the leaves are pulled off, sorted into grades, and baled. 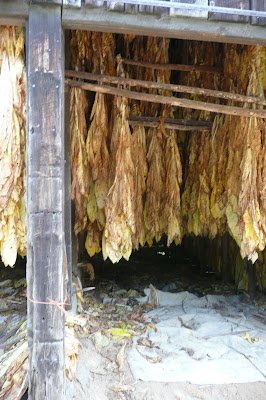 Barning is a rough job, even with the reduced weight of wilted plants. And the roughest is that of the one at the top, near the heat of the metal roof as well as the inevitable wasps' nests. But with a man (or woman) on each tier, one by one the sticks are handed up and the barn is packed full of the fragrant tobacco, top to bottom, front to back, each stick resting horizontally and supported by two tier poles. There are lots of reasons I'm glad we no longer raise tobacco -- but I sure do like to see it mark the seasons in our still-rural county.

We never grew tobacco on our farm but did have an allotment and leased it out, and in the beginning got quite a price per pound, but towards the end it wasn't even worth the paperwork to do it and it seemed less and less farmers were growing it or wanting to lease more pounds.

It was neat to see the season go from the tobacco beds to setting to topping to harvesting. My younger son, who is 6'7", was always in BIG demand to help get it in the barns, usually on the top tier. Boy o boy but that made me SO nervous!!! He loved it though and did it for years, and oooh, you talk about some dirty work!!! UGH!!!

I was always unskilled labor--lugging the sticks of tobacco from the truck (or mule-drawn sled)into the barn and lifting them up to the first person in the tiers.

And it was, indeed, dirty work. The tobacco is gummy and the gum sticks to you and the dirt sticks to the gum.

My mom used to talk some about working tobacco fields when she was a kid. She also worked in a cigar factory for a time, so I guess she was involved in all aspects of the business at some point.

With the big taboo now associated with smoking, I wonder if these "rituals" will soon disappear. Will be a shame really, it's all such a part of our region's history. (And I have to admit that I will always love the smell of a pipe.)

Aye Lah! The memories! Altho it's been quite a few years, often being the person in the top barn tiers, I definitely prefer the lazy way. As I recall, I still couldn't exactly jump out of bed the following day.
The best part of "cuttin and bringing in the baccer" was the the shared meals where everyone cooled off, ate a very fine meal and lied about all the previous years.

It'll be sad to see the end of tobacco, if/when it comes. I always feel a tad guilty for saying that -- like a poppy or coca farmer bemoaning the end of an era.

But the feeling of community -- swapping work with your neighbors/friends/family was wonderful. And as Fay says, the meals were great!

My son always enjoyed the meals and the friendship at the end of a long day ... he said 'the spread' was quite something, set out on big tables and it seemed to go on and on and on ....

Ah, the memories... that rich aroma filled my head just by looking at the pictures. Daddy always said that handing the sticks up to the first tier was the hardest job involved - it sure did cause some sore muscles the next day! We didn't have many of those good meals, though. Everyone was usually in the field, and we went in at meal time and had a peanut butter sandwich or a bowl of Campbell's soup. We drove by a pretty yellow field of tobacco the other day, and my daughter didn't even know what it was. Times sure have changed...

Great post! I learned allot from reading it, and find the process fascinating. 'baccer isn't grown here, so this tradition isn't something I'm used to seeing--around here it was always just hayin' or shucking the corn once it was in. How do they hang the individual bundles from the horizontal poles? I tried to biggify the pictures but still couldn't figure it out. I also love the poem and picture of the 'baccer farmer in the other post! ;-)
Tammy

Phyllis -- the big meals were only when we had friends or neighbors helping -- if it was just us, we were eating PBJ too.

Tammy -- The tobacco plants have stalks as big around as your wrist. A cutter takes a tobacco stick ( about five feet long, maybe two inch diameter and pointed on both ends -- once they were hand split, now they're sawn), jabs it into the dirt by the plant, and tops it with a sharp-pointed metal cone called a 'spud.'

Then, using a light little hatchet type thing, he (or she) whacks off the plant near the ground, picks it up with both hands and jams it onto the stick, using the spud to pierce the stalk about eight inches from the cut. Four to six plants, depending on size are put one one stick.

We sometimes worked in pairs, one person cutting and one stringing the plants onto the stick but Real Men prefer to do the whole operation themselves -- it's faster that way (but much more tiring.)

And let me add, this is burley tobacco -- the tobacco they grow in the eastern part of the state is treated differently -- just the leaves are hung and it's 'flue-cured,' not air-cured.