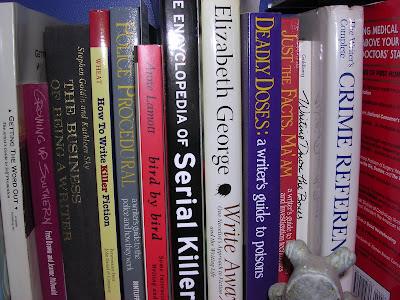 This is taken from an email I received yesterday. I hope you never need this information. The Goodweather women, on the other hand, are sure to, sooner or later.

But beware and take it with a grain of salt. Or at least go to

and check the efficacy of some of the tips. Some are right on but others may not be the best thing to do in the situation.

And if you don't know about Snopes.com, you really should. Every time you get one of those emails with a sad story (dying boy wants postcards, kittens will die if you don't do something or other) or a warning (canned goods tops are all contaminated by rodents; snakes and alligators in sewers) that goes around to be forwarded to every one you know -- check Snopes first. They deal in 'urban legends and myths' and usually have additional information. Some of those emails have been circulating for years and have little or no truth to them. This one has some truth but some also some misinformation.


The following is said to be the result of a series of interviews with imprisoned rapists.

2) The second thing rapists look for is women whose clothing is easy to remove quickly. Many of them carry scissors around specifically to cut clothing.

3) They also look for women on their cell phone, searching through their purse, or doing other activities while walking because they are off-guard and can be easily overpowered.

6) Rapists are looking to grab a woman and quickly move her to another location where they don't have to worry about getting caught.

7) Only 2% of rapists said they carried weapons because rape carries a 3-5 year sentence but rape with a weapon is 15-20 years.

8) If you put up any kind of a fight at all, they get discouraged because it only takes a minute or two for them to realize that going after you isn't worth it because it will be time-consuming.

9) These men said they would not pick on women who have umbrellas, or other similar objects that can be used from a distance, in their hands. Keys are not a deterrent because you have to get really close to the attacker to use them as a weapon. So, the idea is to convince these guys you're not worth it.

10) If someone is following behind you on a street or in a garage or with you in an elevator or stairwell, look them in the face and ask them a question, like what time is it, or make general small talk: 'I can't believe it is so cold out here,' 'we're in for a bad winter.' Now you've seen their face and could identify them in a line-up; you lose appeal as a target.

11) If someone is coming toward you, hold out your hands in front of you and yell STOP or STAY BACK! Most of the rapists interviewed said they'd leave a woman alone if she yelled or showed that she would not be afraid to fight back. Again, they are looking for an EASY target.

12) If you carry pepper spray, yell I HAVE PEPPER SPRAY and holding it out will be a deterrent.

13) If someone grabs you, you can't beat them with strength but you can by outsmarting them. If you are grabbed around the waist from behind,pinch the attacker either under the arm (between the elbow and armpit) OR in the upper inner thigh VERY VERY HARD.

14) After the initial hit, always GO for the GROIN. You might think that you'll anger the guy and make him want to hurt you more, but rapists want a woman who will not cause a lot of trouble. Start causing trouble and he's out of there.

15) If the guy puts his hands up to you, grab his first two fingers and bend them back as far as possible with as much pressure pushing down on them as possible.

16) Of course the things we always hear still apply. Always be aware of your surroundings, take someone with you if you can and if you see any odd behavior, don't dismiss it, go with your instincts!!! You may feel a little silly at the time, but you'd feel much worse if the guy really was trouble.

But wait, even more useful tips! (Most of which Snopes considers not so good or even potentially dangerous)

1. The elbow is the strongest point on your body. If you are close enough to use it, do!

3. If you are ever thrown into the trunk of a car, kick out the back tail lights and stick your arm out the hole and start waving like crazy. The driver won't see you, but everybody else will. This has saved lives.

4. Women have a tendency to get into their cars after shopping, eating, working, etc., and just sit (doing their checkbook, or making a list, etc.)DON'T DO THIS! The predator will be watching you, and this is the perfect opportunity for him to get in on the passenger side, put a gun to your head, and tell you where to go. AS SOON AS YOU GET INTO YOUR CAR, LOCK THE DOORS AND LEAVE.

5. If someone is in the car with a gun to your head DO NOT DRIVE OFF, repeat: DO NOT DRIVE OFF! Instead gun the engine and speed into anything, wrecking the car. Your Air Bag will save you. If the person is in the back seat they will get the worst of it. As soon as the car crashes bail out and run. It is better than having them find your body in a remote location.

6. A few notes about getting into your car in a parking lot or parking garage: A.) Be aware: look around you, look into your car, at the passenger side floor, and in the back seat. B.) If you are parked next to a big van, enter your car from the passenger door. Most serial killers attack their victims by pulling them into their vans while the women are attempting to get into their cars.C.) Look at the car parked on the driver's side of your vehicle, and the passenger side. If a male is sitting alone in the seat nearest your car, you may want to walk back into the mall, or work, and get a guard/policeman to walk you back out.IT IS ALWAYS BETTER TO BE SAFE THAN SORRY. (And better paranoid than dead.)

7. ALWAYS take the elevator instead of the stairs. (Stairwells are horrible places to be alone and the perfect crime spot. This is especially true at NIGHT!)

8. If the predator has a gun and you are not under his control, ALWAYS RUN! The predator will only hit you (a running target) 4 in 100 times. And even then, it most likely WILL NOT be a vital organ. RUN, preferably in a zigzag pattern!

9. As women, we are always trying to be sympathetic: STOP! It may get you raped or killed. Ted Bundy, the serial killer, was a good-looking, well-educated man, who ALWAYS played on the sympathies of unsuspecting women. He walked with a cane, or a limp, and often asked 'for help' into his vehicle or with his vehicle, which is when he abducted his next victim.

10. INTERESTING AND SCARY (but not verified, possibly it came from a tv show). Someone heard a crying baby on her porch one night and she called the police because it was late and she thought it was weird. The police told her 'Whatever you do, DO NOT open the door.' The lady then said that it sounded like the baby had crawled near a window, and she was worried that it would crawl to the street and get run over. The policeman said, 'We already have a unit on the way, whatever you do, DO NOT open the door.' He told her that they think a serial killer has a baby's cry recorded and uses it to coax women out of their homes thinking that someone dropped off a baby. He said they have not verified it, but have had several calls by women saying that they hear baby's cries outside their doors when they're home alone at night.


Be careful out there . . . the internet can be dangerous too.