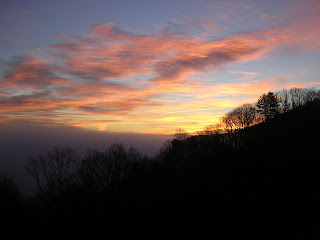 The sky was dramatic this morning. It was actually even more dramatic when I first sat up and looked out the window. But by the time I'd grabbed my camera and run upstairs in my nightgown for a better shot, it had already lost some of its glory.

The dark gray haze to the left is the fog rising from the river. And not ten minutes later, by the time I'd pulled on some clothes and was on the front porch on my way to fill a bird feeder, that fog was rolling up our holler. It envelops the house, makes the temperature drop a bit, but then, as the sun rises, burns off, leaving us today with a Carolina blue sky.

I don't know which I've taken more pictures of -- our dogs and cats or the eastern view. Both are always changing -- always delightful.

The digital camera is maybe my favorite piece of technology after the computer. I got my little camera five or six years ago -- and, oh! the sheer joy of taking huge numbers of pictures without having to pay to have them developed! The camera is incredibly easy to use (I have an Instamatic/point-and shoot mentality) and so small that it rides around in my pocket much of the time.

Viewing the photos on the computer is great too -- blow 'em up to check all those little details; use the free program for simple fixes like cropping or straightening. I admit I kinda lust after Photoshop which I got to play with it a few times. I had great fun making pictures of flower petals all twisty or altering shots of William the dog with a fish-eye lens effect, but it's an expensive piece of software for someone's who's just fooling around. (It was this brief experience with photo alteration that gave me the idea for some of the so-called Art that Elizabeth and Phillip see on the Studio Stroll in Art's Blood.)

Unfortunately, this is my least favorite time of year for pictures. In the absence of snow, the landscape is mostly gray and brown and muddy. I'm reduced to shooting the potted primroses on the dining table. But come spring my trusty digital camera and I will be ready!

Photoshop is ridiculously expensive. Corel Paint Shop is the best alternative. I've spent thousands of hours with it, it's stable and fairly easy to use when you start. When you burrow down into the program, it has 95% of the functionality of PS. There's a free program called GIMP (open source software) which many people are now using for digital imaging. I haven't tried it but I'd go that route if you don't want to spend any money right now.

Thanks,Beno. I'll check it out.