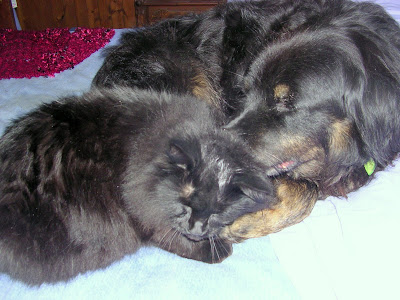 Bear, the prototype for Elizabeth's Ursa, is the Zen Master (Mistress?) of our dogs. Contemplative and focused at all times ("Bear's got an Idea!" we say as we open the door and she pads in , heading straight for the bed, looking neither right nor left, nor pausing for a pat), Bear is also a firm believer in the Law of Conservation of Energy. Only the red hound Maggie (Elizabeth's Molly) can convince Bear to go for a run in the woods; in general, Bear prefers an easy amble to a run . Actually, she prefers sitting to an easy amble, and lying down to sitting.

This is a dog who was so laid back and inactive as a puppy that our neighbor's son, her original owner, asked if he couldn't have a real dog instead. Bear has been known to go to sleep, stretched out on her broad back, belly exposed, in the waiting room at the vet while all around her other dogs shiver and pull on their leashes to get to the door.

Bear loves Eddie the cat and almost every morning spends a little time grooming him, as the picture shows. When Eddie and his sisters were born down at my younger son's house several years ago, Bear and Maggie would make daily visits to see the kittens, almost drowning them with their enthusiastic tongues. As a result, I suspect that Eddie suffers from a little confusion as to what exactly he is.

When Signs in the Blood was first out, I received a phone call from a friend. "Vicki!" she said, "I'm reading your book and I'm really enjoying it but I just got to the part where Ursa's missing. . . I have to know . . . is she going to be all right? If something bad's happened to Ursa, I can't read anymore!"

I assured Ginger that Ursa was indeed okay and went on to make a promise I may someday regret: "I will never harm a dog in my books."

How could I when they're so like my own?

Bear is so beautiful. I laughed out loud when I read the part about the neighbor's son wanting a 'real dog' because she was so laid back! Do you know what breed/breeds she is? I'm glad you made the promise about not harming the dogs. ;-) Usually when you pick up a book that has a dog or cat in it, you can be pretty sure that it's going to end badly for the animal. They are just a prop for the story, and it's rather overdone I think, and distasteful. Picking up a good book that has a pet in it, that is part of the storyline, and interaction of the characters is refreshing. And normal. So thank you!
Tammy

Hey Tammy, Thanks for the comments.I haven't a clue about Bear's ancestry -- she's a biggish, very stout (in both senses of the word) dog. Actually, she looks a bit like a Tibetan Mastiff but it's more likely she's a combo of maybe Rottweiler and who knows.

I know what you mean about sensing that the pet's just there to be done in in some horrid fashion. Like the friendly, not too bright , sweet guy sidekick in the war movies whose name tag might as well read CPL. DEADMEAT.

Awww, I love your furry children. Especially Bear. Lots of good personality there and it shows through in your post.

Thanks for stopping by, Spirit! Yep, all our beasties are, as we say in these parts, 'just eat up with personality!'