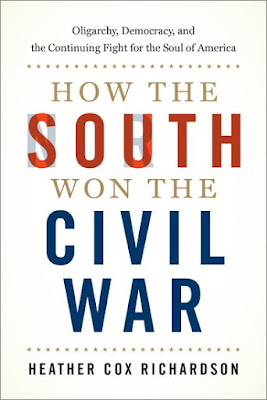 Yes, whelmed, only because I refuse to admit to being overwhelmed by the concatenation of news, social media, and books I'm currently reading.  So here goes.

Heather Cox Richardson, whose Letters from an American daily post and news roundup (HERE) is my pre-breakfast read every morning, has written an important book that should be must reading for everyone wondering how we got to this fraught point in history. (Spoiler:It's been a very long  and ugly journey and it's probably not what you were taught in American History.) Richardson traces the ideology that dashed the hopes of democracy that accompanied the conclusion of the Civil War, as the oligarchical systems of the old South spread West, as well as returning to power in the South, substituting Jim Crow laws, intimidation, and repression for slavery.

And here we are. Here we are as voters in Georgia--especially minority voters--are met with inadequate facilities for voting and the President* rails against voting by mail (even as he and his family avail themselves of what, especially in this time of pandemic, should be a fundamental right.)

As I said, such an important book. There's an excellent review/summary HERE.

Meanwhile, I've been reading the impassioned Facebook posts of a friend of mine--a person of color--as she agonizes over unpleasant racist experiences her children are having and remembers similar experiences in her childhood. Her words are deeply personal and make me wish I could erase the pain. And make me reexamine my own deeds--or lack of them.

Finally, there's this novel--Five Smooth Stones. A Facebook/blog friend has been recommending it for years and I finally succumbed. From the horrors of the casual racism of the South in the Thirties to the Civil Rights struggles of the Sixties, it brings to vivid life the omnipresent dangers of Living while Black.

And here we are. Still.  Despite some real advances, black citizens are too often targets of violence--from police and from ignorant and hateful people. Like the (white) man on the bike who terrorized three teens attempting to memorialize George Floyd, the hulking (white) brute looming over a young woman with a BLM sign and shouting Fuck you over and over, the (white) woman in Central Park threatening to call 911 on a (black) man who had dared to tell her to leash her dog. Thank goodness for the ubiquitous cell phone cameras that are recording some of this so that the perpetrators are called out. It's made me think more kindly of our addiction to those little gadgets.

As an elderly white Southern woman, I grew up amid the views that sustained and still sustain racial inequality. Growing up, I didn't question why there were separate drinking fountains, why the woman who worked for my grandparents had a separate set of dishes to eat her lunch on, why she called me Miss Vicki and I called her Annie . . . (I still dislike being called Miss Vicki.)

It was 1960 before I was even slightly 'woke.' I remember signing a poll at Emory where I was a freshman. Are you for or against integration? the poll asked. And when I signed my name in the FOR column, the little blond sorority girl in charge of the poll, asked if I understood the word, hadn't I meant to sign AGAINST?

No, I hadn't. I could finally understand the fundamental wrongness of the society I grew up in. And still I search my soul to see what traces linger there. It is hard to believe that voter suppression is so rampant and accepted so easily by so many.

It's really unbearable...unconscionable, that our grandchildren still have this to look at. That racism is alive and as sick as ever, and promoted by groups of haters...when the truth of their prejudice is brought to light once again...our world is in such a sad social condition. My heart aches.