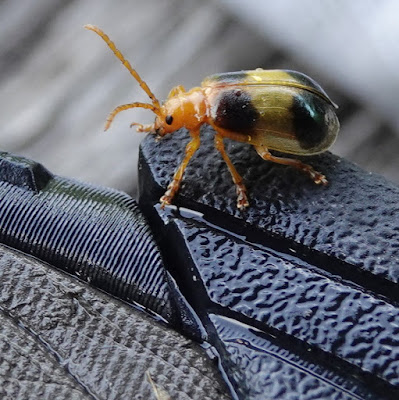 John called my attention to this handsome critter crawling over his shoe that was on the porch railing. So I wanted to figure out what it was and did the search thing, to no avail. (The first search showed me pictures of spa rocks--shiny and black like the shoe sole.)

The closest I could come (on a NC website that has pictures of 149 common beetles) was the Larger Elm Leaf Beetle. The color and markings are more or less correct but the site says that this beetle is distinguished by its 'lightbulb shaped' body and  the beetle pictured on the site is definitely more bulbous than this one.

But this one might be quite young--note the semi-transparency. Age may contribute to that bulbous shape, just as in humans. 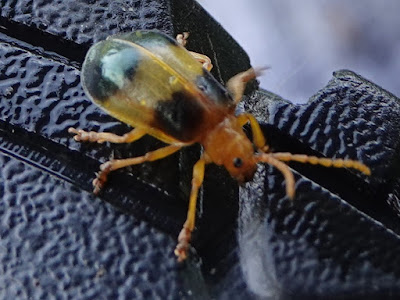 But down the rabbit hole I went, realizing how little I know about beetles. Right here in North Carolina, I might encounter a Pleasing Fungus Beetle or a Pustulated Carrion Beetle. Or a Twice-Stabbed Lady Beetle. Or a False Bombadier or a Festive Tiger . . .

In Patrick O'Brian's Aubrey-Maturin series, Stephen, an ardent natural philosopher, admits to a friend that he has not given the Coleoptera the attention they deserve.

I find myself thinking the same thing. 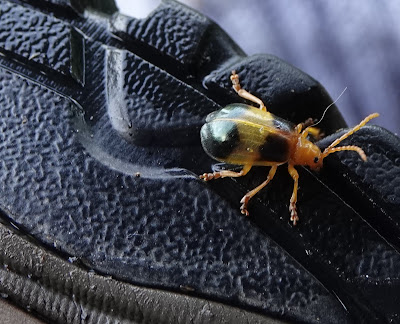 Whatever it is, its purpose in life is to destroy your plants.

As the other Beatles said "Let it be, Let it be." And of course I had a new looking beetle appear on my finger on my porch this morning! Look what you've started! But I'm not going to look it up!

I wonder how long ago that "light bulb shaped body" description was assigned? Because light bulbs have changed shape over the years. One of the older bulb shapes matches your beetle quite well.

Good point, re bulbs. My sisier-in-law confirms (via some bug app) that it is, indeed a Larger Elm Leaf Beetle.