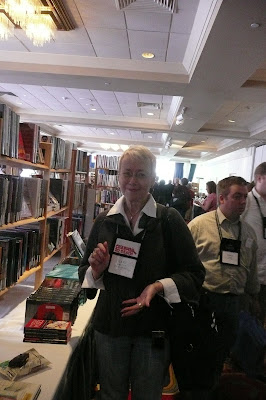 And, of course, just about the first person I ran into in the book room was KAYE BARLEY of Boone, NC. Kaye is a perennial presence on DorothyL- a list serve for readers and writers of mystery -- and she has been a big supporter of Elizabeth Goodweather from the beginning. We'd never met in person but we've exchanged so many emails that I feel I know her. 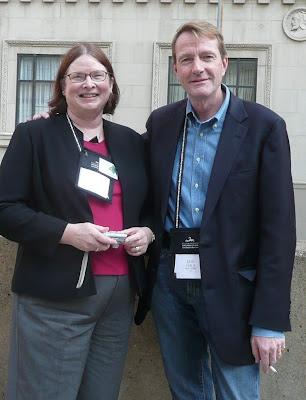 Then I met up with Sheila Connolly -- author of two mystery series and another email friend -- and we took advantage of sighting Lee Child -- author of the wildly successful Jack Reacher series -- so I could get the two of them in one shot. 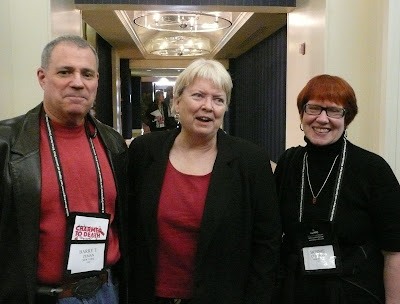 Margaret Maron, who was kind enough to blurb IN A DARK SEASON, calling it a 'tale of love and lust,' was hanging out with Barry Zeman, author and authority on the history of the mystery and Bonnie of The Black Orchid Bookstore in NYC.

And there were and will be lots more -- Blogger only lets me put four pictures per post. But when the weekend's over, I'll make a web album 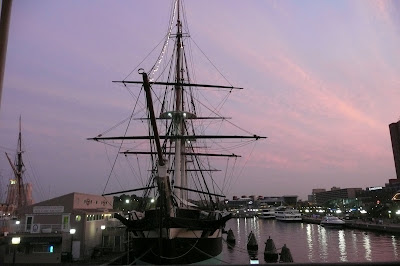 I did make it to an excellent panel called IT'S ONLY MAKE BELIEVE: Telling Lies for a Living (Laurie R. King , whose work I have praised far and wide was one of the panelists).
When it was time for supper, John and I walked down to the Inner Harbor where we had sangria and tapas, sitting outside with a fine view of the USS Constellation (ca. 1854).

It's an early evening for me though -- the panel I'm on is at 8:30 AM tomorrow morning.

Vicki - What fun the day must have been! I love the Jack Reacher books. Thanks for taking the time to post - we were wondering how your day went. ~Liz

Sounds like you're having a great time. I too thank you for taking the time to post for us.

I'm wondering why Blogger only lets you post 4 photos. I've posted 6 or so at various times. Computer stuff is ever confounding.

I love that last photo. So pretty and peaceful looking. It's almost like Elizabeth finally got to go on that 'seaside' vacation. Ha... I can't believe you are getting to meet so many interesting folks. I hope you continue to have a great time.
Tammy

Hey, you all -- it's kinda wild, being around so many Really Big Names -- and not a dog nor a chicken in sight. I hardly know how to act.