Looking for Signs of Fall 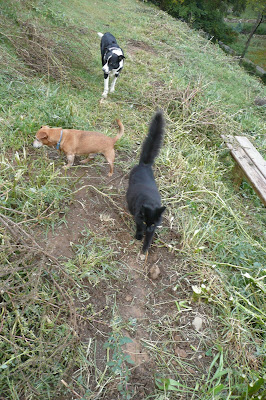 I took a brief walk yesterday and most of the dogs went with me, including Eddie, the cat who has some species identity conflicts. Eddie followed along, meowing loudly till he caught up, then kept pace with us into the woods. As we walked, his tail got puffier and puffier, his ears went back, and he seemed to be somewhere between enjoying a walk in the wild and terrified at what might be lurking in those deep woods. Not unreasonable as my husband heard coyotes recently; I saw a fox last night; and we know there are bear in the area. Also bobcats, bigger even than Eddie.

Eddie stayed close the whole way -- tense, alert, and spooked by every falling leaf. When we turned back, he seemed relieved. I could see him beginning to relax as we left the woods, moving back into the pasture, and as we neared the gate to his own stomping grounds, Eddie resumed his customary Master of the Universe swagger, once again, emperor of all he surveyed. 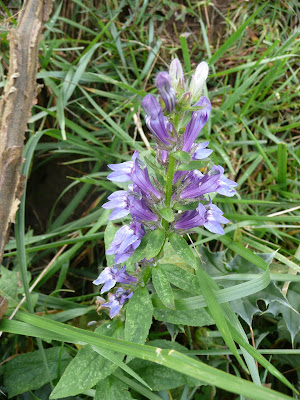 One of my favorite wildflowers, the lobelia is still blooming and, thanks to a recent rain, the grass is still green. There's not been a frost yet (though it's definitely chilly at night), so the fall color hasn't come on beyond a slight tinge of red or gold here and there.

But I did see this tiny, two-leafed maple seedling doing its brave, crimson best. 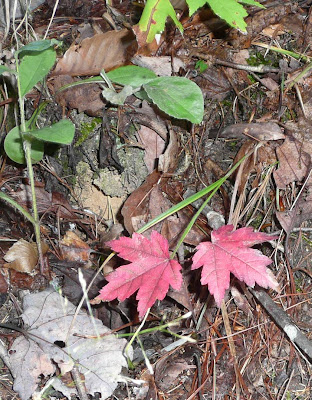 And the wild persimmons are beginning to blush -- though it'll be several weeks and a hard frost before they're edible. Makes my mouth pucker to look at them now. 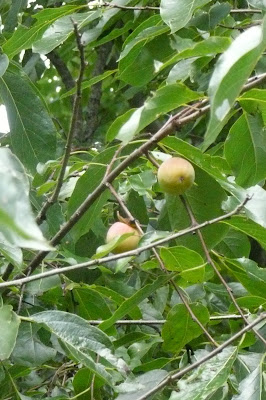 I have just read some of your posts and the website :
http://vickilanemysteries.com/

I liked the way in which you put the words in creating the whole scene of a meaning. For other aspects of the writing, I shall talk later on.


If you are interested in reading short stories and other writings by an Indian author, do visit my blogs.

My goodness, you have a lot of blogs! I'll peruse them later -- thanks for stopping by!
Vicki

Loved the Eddie story and the pictures are great as usual. Cats are so funny, and I can just see his tail fluffing out the further he went, but still determined to stick it out. :-)
Tammy

Cats are so very self-important -- and so much fun to watch when they don't quite have everything under control.

I never knew about the way cats puff up until 9 years ago when Major did that for the first time. He was a little kitten who suddenly turned into this huge puffball. (Will have to post the whole story on my blog later. It is hilarious.)

Don't know about your area, but it looks like we may get that first frost here tonight.

Yep, we're under a frost warning too.