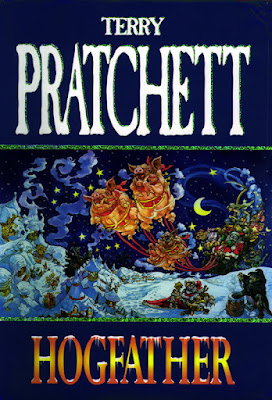 Oh, my goodness, where to begin. I’ve just finished Hogfather, by the marvelous and lamentedly late Sir Terry Pratchett-- is a wonderful book for those of a certain turn of mind. I appear to be of that ilk.

Hogfather, whose sleigh is pulled by four immense pigs, is Discworld’s equivalent of Santa, and he has disappeared, due to a lack of belief. So Death takes his place with surprising results. Also, this lack of belief has left a void and various entities and swarming to fill it(see below, The Cheerful Fairy.)

I am still poking about the margins of Discworld—the Tiffany Aching books are my favorites—but I am cheered by the fact that there are so many to look forward to—there are 41 in all.

Meanwhile, here are some good bits from the book to entice you.

“The Cheerful Fairy was quite short and plump in a tweed skirt and shoes so sensible they could do their own tax returns, and was pretty much like the first teacher you get at school, the one who has special training in dealing with nervous incontinence and little boys whose contribution to the wonderful world of sharing consists largely of hitting a small girl repeatedly over the head with a wooden horse.”

On Christmas Hogswatch presents: “’How . . . how full of potential they seem in all that paper, how pregnant with possibilities . . . and then you open them and basically the wrapping paper was more interesting and you have to say, “How thoughtful, that will come in handy.”

“. . . they tried too hard, like an adolescent boy going out wearing an after-shave called ‘Rampant.’”

“One should always be wary of people who talk unashamedly of ‘fellowship and good cheer’ as if it were something that can be applied to life like a poultice. Turn your back for a moment and they may well organize a maypole dance and, frankly, there’s no option then but to try and make it to the tree line.”

Oh glorious Pratchett! I love his books, and believe I may have most of them. Definitely something to reread rather than watch any news for the next 2 years. So glad you're enjoying them!

Does Discworld still exist? Do various authors use it? I read a book or two decades ago, but I am sure by a different author. I don’t really read SciFi, so I have lost touch.

Pratchett's Discworld is very much still a thing. No other authors involved, to my knowledge. Just google Discworld and you'll see.

It's one of my favourites of Pratchett's series, and features the character I consider his greatest -- DEATH. (As Discworld fans already know, that name is always spelled in all-caps; I'm not shouting.) When Pratchett died, some of the ensuing pictures of DEATH welcoming him to the afterlife were so poignantly drawn they made me cry.

BTW, if you search YouTube, you will find that, occasionally, someone will have uploaded a copy of the movie version, albeit often in parts. Pirated, alas, but, if a movie isn't made legally available, that sort of thing becomes inevitable. It's too good a film to deserve having the copyright holder bar access to it.