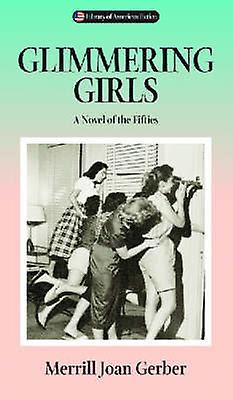 A few weeks ago when I announced my big news about the Civil War book (hereafter to be known as Within My Memory Yet,) there were lots of comments and congratulations on my Facebook page -- and among them was one from the author Merrill Joan Gerber, a FB friend.


She had evidently followed the link to my author page on the Regal House website and read that I'd graduated from University of Florida. Since we were there at more or less the same time, she wondered if we might have studied under the same professors. As it turned out, we both remembered Dr. Nathan Comfort Starr -- which led to excited comments from two other FB friends -- Flossie Hickland and Anne Witters Langan, also students at UF at the time.

Then Merrill mentioned that she'd written a novel set at UF in the late fifties. (Merrill is a prolific and award-winning novelist and short story writer who currently teaches writing at Caltech). Of course, I ordered it at once and devoured it whole.

Glimmering Girls (and now I'm quoting from the write-up on Amazon) " tells the story of . . . Francie and her friends Liz and Amanda, . . . college students coming of age intellectually, emotionally, and physically in a setting where men were forbidden entry to women's dorm rooms, and women were locked into those rooms after curfew. College life for women was governed by one simple, cardinal rule: Marry Before Graduation or Be Lost Forever. . . "

Panty raids ( a mob of probably drunken young men storming the women's dorm and demanding underwear) were a thing back then -- and the general reaction of both the cloistered young women and the college authorities was surprising. Segregation was still the rule and girls were cautioned not to scare off potential mates by sounding too intelligent.

A student of social history would no doubt draw a straight line between the mores of the fifties and the views still held by many of that generation today. (Many, not all. Some of us moved on, no longer willing to accept 'things as they are'.)

Glimmering Girls is a terrific novel -- especially for those of us who came of age at that time. I was hooked from the beginning scene where Francie's roommate is pouring over a bride magazine as I suddenly remembered what a common sight that was. I poured over a few myself, inasmuch as John and I had an 'understanding' that we would be married after college, though we weren't formally engaged.

The novel points out the inequality of the sexes, the unrealistic expectations for women -- and here again, it brought back bad memories -- from the mandatory panty girdles; to the memory of being in a friend's dorm room when a girl I didn't know came in and said, "I think I was raped last night,' and no one had any suggestions to make; to the generally held notion that women in college were there to get a degree so they could teach (until they married) and said teaching degree would be 'something to fall back on' should the unthinkable (divorce or widowhood or, worst of all, spinsterhood) occur.

And that's what I did -- got my degree in English because I loved it and was good at it, and took the minimum of education courses to qualify for a teacher's certificate.

At this point in my life -- almost sixty years later -- I have no regrets. John and I have made a very good life together. But only because we broke away from the path our families had expected we would follow and moved to our farm in the mountains. I wouldn't change that for anything.

I wonder though . . . had I not gone off to college, already certain that we would marry, what path might I have taken then?

A very fine novel  -- I'd especially recommend for book clubs  There is so much to think about and discuss here -- whether, like me, you grew up in this world or whether you are younger and would like to understand how things have (or haven't, in some cases) changed.

Email ThisBlogThis!Share to TwitterShare to FacebookShare to Pinterest
Labels: Fifties, Glimmering Girls, Merrill Joan Gerber, University of Florida, Within My Memory Yet

My high school graduating class was in 1960, and I was proud to be one of the first of my family (including cousins) to go to college. I didn't really have any plans after that...but of course marrying was expected. I remember considering that I was raised in an ivy towered culture of a private school. I actually thought there were other ways of life in which everyone else took part. Soon in the 60s that happened, but it was just blooming as I came of age, it hadn't really been there before.

Since I come from the same generation, I'm sure I will find this interesting. I will definitely look into it. It was a whirlwind time, wasn't it?

So many long-accepted things were just beginning to change. I remember that birth control (apart from condoms) had to be prescribed by a doctor and then only if one was married -- or about to be, as in my case, to allow time for the cycle to adjust. I remember I couldn't get a checking account without my husband signing on it. I remember being turned down for a teaching job because I was recently married and "likely to get pregnant and quit." I'm still angry about that.

I think I would love this book. Brings back so many memories just reading about it. Thanks Vicki. xx

Great post. And this sounds like a great book. It seems to be from my era. When I quit a clerk's job to go to college, colleagues kidded me it wouldn't be long until I had my MRS. degree. And I went for a teaching credential post BA, (but I truly DID want to teach.) I still remember, though, while going for my BA, I met with a TA for help in a course that was giving me difficulty, and he said, "Why do you care about this? You're only going to get married and have a family . . .." (I can tell you, that gave me a steely resolve to do well in that class and to get my degree.)

I remember hearing about the concept of panty raids, but I don't think I was ever aware of one occurring, and I stayed in residence for 5 semesters.

What a beautiful and most interesting post made for the International Women's Day!