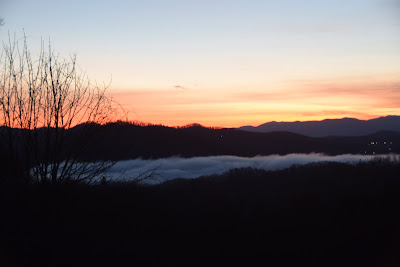 The Vernal Equinox (March 20) is a week away and I'm trying to pinpoint just where the sun will rise. Right about in the middle of our view (which is due east.)

Three months ago, at the Winter Solstice, the sun rose all the way to the right/southeast (1), next week it'll be rising in the center (2), and by June and the Summer Solstice, it'll be way over to the left/southeast. The back to the center for the Autumnal Equinox. 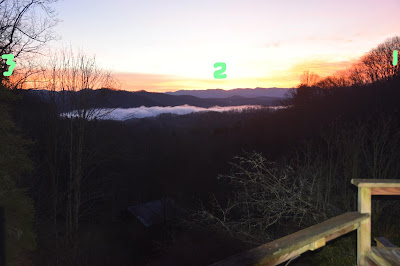 I find it hard to believe that it wasn't till we moved here that I actually paid attention to this yearly transit and realized how great the distance was between summer and winter sunrise. Of course I "knew" it happened -- the tilt of the earth, etc. ; science classes had explained the whole thing with pictures and diagrams and even scale models.

I really do know about that. Nevertheless, as I watch for the sun's rising throughout the year, I cherish the (totally erroneous and unscientific) image of the sun as a chained lion, pacing back and forth on the horizon -- from winter, when he has fled south to the farthest reach of his celestial chain, taking much of his warmth and light with him, to summer, when he travels north, bringing with him longer, hotter days to the northern lands.

I could imagine an ancient tale of a time when the Sun Lion
was free to roam as he would . . . seasons were chaotic, agriculture impossible . . . till one brave soul captured and chained the lion, thus regulating the seasons.

Now I have to go look for similar myths -- did I make this up or is it an echo of something I read once? Nordic mythology? African folk tales? Native American story?

And what will happen if the lion is loosed again? 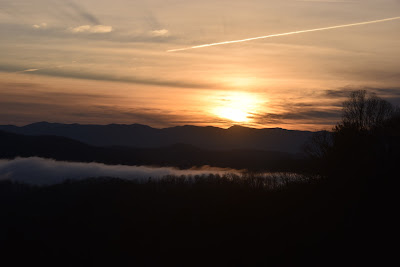 We've now had (or will have later today) 4 days in which the daytime temperature has exceeded freezing. Yay for us.

This is the first time I've heard of the sun lion, so I'm no help. It does seem chaos is becoming more the norm, however. So while you write your own allegory, I look forward to the voice who tells it. And who will go up against the lion. A mouse perhaps?

AC -- you guys have to be hardy -- but how glorious Spring must be hen it finally arrives.

Barb -- in most fables/myths it's wits that overcome strength -- a mouse might be appropriate.

The Sun is associated with the lion in astrology -- the sign Leo is symbolized by the lion and ruled by the Sun. There are also Persian myths that bring those two symbols together, and Sekhmet, the lion-headed Egyptian goddess, is the daughter of Ra, the Sun god.

That chaotic time actually existed — five times, in fact — during and after the great mass extinctions. Now we are entering the sixth such extinction, and we’re seeing it progress in the increasingly crazy weather.