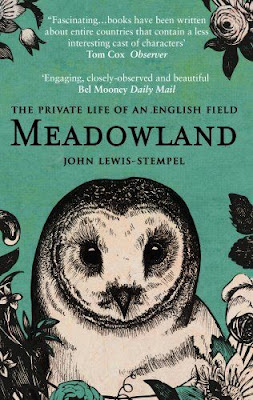 Martin, my longtime blog/FB friend in England surprised me with this wonderful book, saying he knew I'd been charmed by the English countryside. And I was, and still am.

The book is a marvel -- beautifully and poetically expressed, it is one man's close observations, by day and night throughout a year, of a 5.7 acre field on which sheep and cows are grazed part-time, hay is cut, and bits are left to the wild. 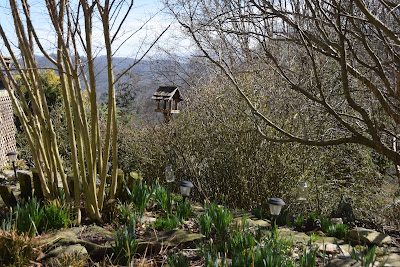 Lewis-Stempel's book made me think at first of Thoreau who had "traveled much in Walden," and of Annie Dillard and Hal Borland.  And then of the Square Foot Challenge a science teacher I knew used to set her kids in which they were to mark off a square foot outside and identify every living thing within that area. 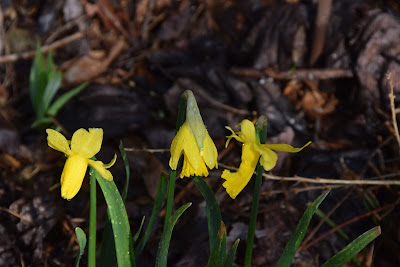 The author has done this with his field, keenly observing the comings and goings of badgers and foxes, voles, shrews, and moles (aka mouldywarps!), hedgehogs and rabbits and birds in abundance, butterflies and moths, down to worms, slugs, grubs and more insects than seems even probable. 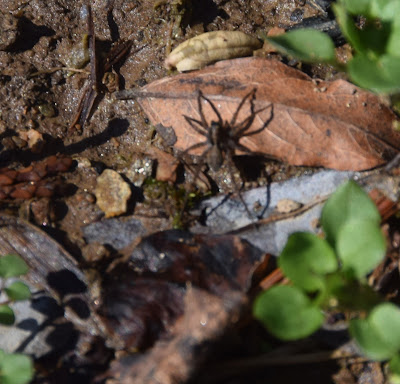 Toss in some country lore, science and history: Sorrel, we learn, bears the Latin name rumex acetosa. Rumex was a type of Roman javelin; acetosa means vinegary. Sorrel has a javelin-shaped, sour tasting leaf which was cultivated till the 1600's and used as 'green sauce' for fish. Agricultural workers used to chew the leaf to stimulate saliva. Sorrel's red seeds are food for goldfinches and the caterpillars of the small copper butterfly feed on its leaves. 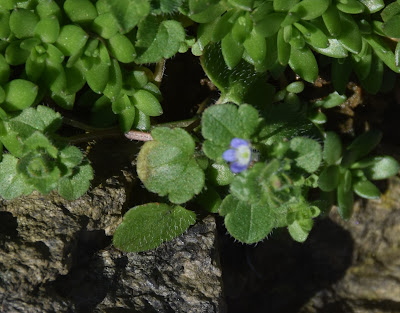 Whew! I thought I had a handle on most of the flora and fauna around me but I can see I have a very long way to go. I went outside yesterday -- our first sunny day in a while -- to observe closely and realized I don't know the name of that spider  up there (that's chickweed to his right) nor am I quite sure what that tiny lavender flower is. Apple of Peru?  No, that's a similar flower but larger.

This one may be Speedwell - or Veronica persica. (Now I need to find why it's called speedwell.)The one below is periwinkle, once called Joy of the Ground, I believe. 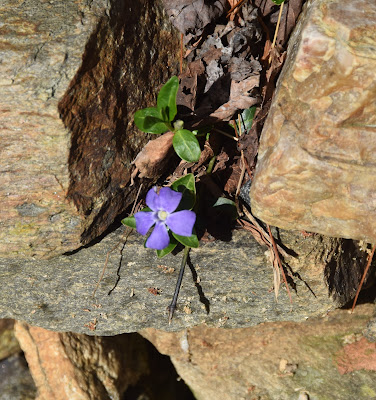 And I am at a loss to put a name to the common 'weed' below -- popweed? bitter cress? It will take more investigation.

But now, after a few minute with Mr. Google, I know this: the name speedwell comes from an archaic usage of speed meaning to thrive. And little speedwell does just that, spreading merrily in my flower beds.

Many thanks, Martin, for this lovely book that is going to make me pay closer attention to the things in my field! (I only wish there were badgers and hedgehogs.) 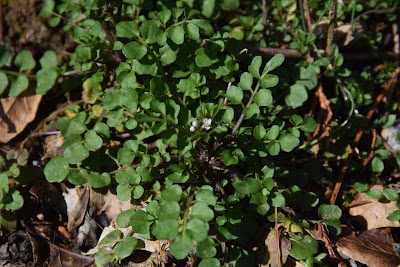 That square foot project would be a good one. It's amazing that we don't know what's under our feet.

Great to think about, and what a good project to observe and learn so much about the variety in small spaces. The book does sound good too! When I start wildflower walking (soon I hope) I have the same sense of wonder. Unfortunately (perhaps) I forget most of what I learn from year to year...so have to learn it all over again!

Interesting, and so informative. Thanks for sharing. xx

What a timely gift, now you're eyes are ready to greet the Spring with a whole new appreciation. Thanks for sharing this look into the wonders of nature. I'm looking forward to Spring with renewed anticipation.

What a great gift for you! We call that little purple blossomed plant, vinca....shiney green leaves all year - and little purple blue flowers - indeed speeding well! It's exciting that you have so many plants already -- it's always a pleasure to watch your early spring!