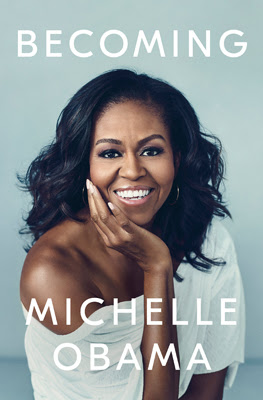 I was enchanted by this book. For me, it was a page turner, even though I knew the ending. I read late into the night and finished up the next day, despite all those things I 'should' be doing.

One of the things I enjoyed the most was the parts dealing with MO's childhood -- the strong, centered, striving, working-class family that produced this exceptional woman. The  American ideal, really.

The section  that might be titled Michelle Meets Barry is almost like a sharp romantic comedy. She is assigned to mentor the new guy in the law firm and almost at once starts trying to set him up with dates. Well, we know how that turned out.

One of my favorite lines comes sometime later, after they have become a couple. Late one night in bed, he's staring at the ceiling and she asks him what he's thinking about.

And yet she persisted. The differences between the two were and are many but the strength of the relationship shines through the words.

And speaking of words, there's some very lovely writing in this book: In talking about her parents' marriage, MO reveals that much later her mother  told her that every year when spring came and the air warmed up in Chicago, she would think about leaving her husband.

After explaining that her mother never said whether these thoughts were serious, MO goes on to describe the punishing Chicago winters with their low gray skies, segueing to this lyrical chapter closing:

"Eventually, however, something happens. A slow reversal begins. It can be subtle, a whiff of humidity in the air, a slight lifting of the sky. You feel it first in your heart, the possibility that winter might have passed. You may not trust it at the beginning, but then you do. Because now the sun is out and there are little nubby buds on the trees and your neighbors have taken off their heavy coats. And maybe there's a new airiness in your thoughts on the morning you decide to pull out every window in the apartment so you can spray the glass and wipe down the sills. It allows you to think, to wonder if you've missed out on other possibilities by becoming a wife to this man in this house with these children.

Maybe you spend the whole day considering new ways to live before finally you fit every window back into its frame and empty your bucket of Pine-Sol into the sink. And maybe now all your certainty returns, because yes, truly, it's spring and once again you've made the choice to stay.

MO doesn't shy away from the difficulties in her own marriage, culminating in the fish bowl existence of politics and living in the White House. The insults, the lies, the threats directed at the first black president and his family all hurt, but MO's "When they go low, we go high" is a measure of her strength -- that same strength that makes her detractors see an angry black woman, whatever she does.

I came away from the books with a profound realization of the accomplishment of this woman and her family. In a country that gives lip-service to equality, a person of color, not to mention a woman, is still handicapped every day, in so many ways from small to large, that they have run twice as fast just to stay even. Michelle Obama has shown how it's done -- with grace, humor, style, and compassion.

There's an excellent review HERE that will give you a better overall sense of the book.

I loved this book. I've admired Michelle Obama for a long time, but reading her words cemented that admiration. I, too, read it in a large gulp and I need to go back and reread it again sometime to catch the nuances I missed the first time around.

I have decided to listen to the book since she narrates it herself. First thing on my list after the New Year. I have such deep admiration for her and her mother. Thanks for the review. I'm really looking forward to it.

I just finished it as well and loved it. I slowed down my reading near the end, as I knew that turned out!

Thanks for this review. She is such a remarkable person.
I also want to thank you for your blog, which I read every day, but rarely, it seems, make comments. I just wanted you to know how much I enjoy the glimpses into your life on the other side of the country from me. Wishing you and your family the jolliest of Christmases!

Thank you so much, Carol! I'm always aware of many who follow the blog but rarely comment. Usually it's when I run into someone out in the world who asks about some aspect of my life she could only know from reading the blog. It keeps me on my toes!

Vicki, I finished the book last week and feel the same way that you fo about it. So well written that I sometimes felt I was right there beside her.

And when is your next book going to be published?

I wish I knew, Nancy. A long story which I'll share after the holidays.

Oh yay - good to know - it's my Christmas read!