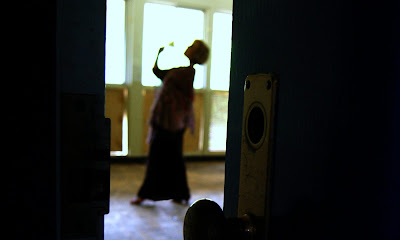 Back in July I saw this announcement in a newsletter for writers and realized that a story I had written several years ago to read to my fellow campers at Wildacres Writing Workshop might be just the thing.

The guidelines said that the story should include a ghost, spirit, paranormal activity, mysterious circumstance, or a folklore tale that could be perceived as a ghost story.  It also said that the winning stories would be selected by Jack Sholder, director of  Nightmare on Elm Street II (and many other horror films) who should know from scary.

Done. I had just the thing. I spent some time polishing it then sent it in.

Lo and behold, on Tuesday I got a call saying that my story had won first place!  So I'll be heading to Tryon on Halloween to read "The Bargain" to an audience.

As a matter of fact, on this blog post HERE, you can see when I first began the story, some seven years ago.

I believe that the story in its entirety will eventually be posted on the Tryon Arts and Crafts School site -- probably after Halloween. I'll let you know when that happens.

So glad I finally finished it!.

Congratulations, Vicki! Well done. So glad for you. I'll look forward to reading it later.

Oh how great for you! Enjoy Tryon, the festival, and being in the limelight reading your work!

Congratulations my friend, only wish I lived closer so I could hear you read it. So happy for you, xx

I know you will have a great time at the festival. It's a special honor given all the marvelous tales in our state.

Wonderful news! I would love to hear you read the story! Can't wait to read it! Congratulations!

Hurray! That's very cool. Have fun reading it on Halloween.

Awesome!
Have a nice time reading it for Halloween.

Well you've got me. You have bated the hook and I want the rest of the story please.