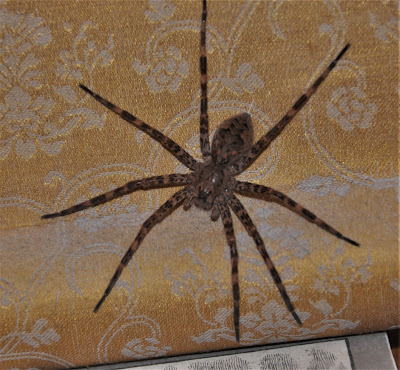 This is Igor who hangs out in our bathroom. Sometimes s/he falls out of the towel I've just picked up to dry off with. Or out of my nightgown. I figure that the adrenalin rush is probably good for me.

Mostly, though, Igor just lurks . . . ignoring me and waiting for a unwary bug. 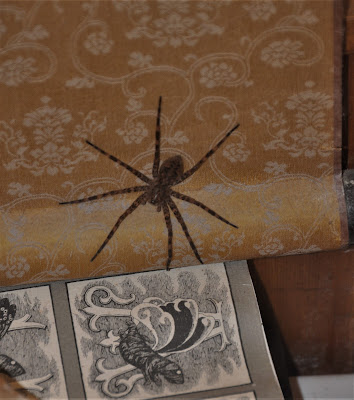 Yesterday Igor posed nicely on the scroll that hangs behind the toilet. Perhaps s/he was checking out the Edward Gorey book and the pictures of strange insects. 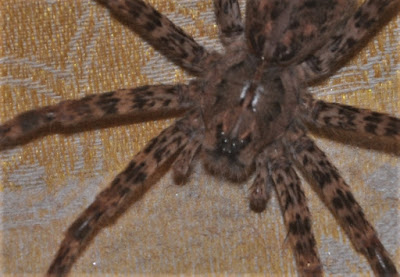 I've been calling this critter a wolf spider but Google searches have only confused me. Wolf spiders evidently have eight eyes bit I'm seeing only six.

Whatever sort of spider Igor is, s/he's a handsome specimen. 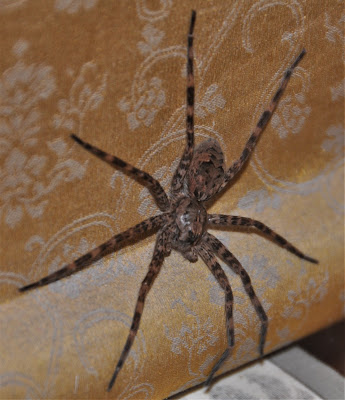 Email ThisBlogThis!Share to TwitterShare to FacebookShare to Pinterest
Labels: spider

Oh my gosh! I'm afraid Igor would have found himself in a glass and then outside, if I'd spotted him. I have big spiders in my house too. I reckon they're as old as the house (115) but they all get put outdoors. (It's possible it's the same one that just comes back in!)

Igor is magnificent. We will always remember our encounters and complimented him on his bug-free home. Of course, that's sort of a Florida compliment.

I know someone in my household who would go in the kitchen for toileting!

I was about to say exactly what Jenni said, into container and outside for that critter. So glad you live out in the woods...I'm happy to have a cat to control most of my bugs, except the flying kind. I wonder what she would do if she saw Igor. Of course he/she would get away and come tease her another day!

Sorry, I don't need any rush from spiders and they are not allowed to live inside if I can prevent it. Not fond of any insects inside and certainly not spiders. I tend to agree with you on many things, but we are quite divided on this. Finding him in my nightgown? That might be a deal breaker regarding my feelings about live and let live. It would be a crime of passion or self defense and I suspect the jury would let me off. Otherwise, I'm with the others on taking him outside. Far outside.

Quite handsome! While I prefer to capture spiders in the house and put them outside, we do have some lovely Charlotte's around. I suppose I really ought to leave a few of those big ones inside though to help with bug reduction. Hmm.

Igor would be escorted to the door by me. And out. I try to avoid killing harmless spiders, but I don't want them for room-mates.

Virtually all spiders have fangs and produce venom. If you get bitten in a thin-skinned area like the underside of a wrist, you’ll get an ulcer because even a tiny bit of weak venom can kill tissue. I know from experience. If a cat or dog is bitten on the inside of its mouth, you’ll have a problem to deal with. And a baby’s tender skin may end up with a nasty ulcer. I don’t want spiders in the house, and we fight a constant battle with them.

I hear you, Sandy. Josie doesn't get anywhere near that bathroom and I pay close attention to her wherever she is. And neither the cats nor dogs seem inclined to go after Igor or vice versa.