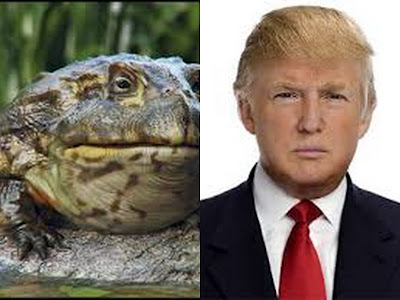 Many years ago I taught at a prep school in Tampa and I encountered some younger versions of Trump -- the golden boys and girls whose parents' wealth had led them to believe they were better than everyone else (the losers) and worthy of whatever they wanted. I've seen the pout when they don't get their way, the sulk when someone else has the spotlight, the self-satisfied smile when they bully someone into giving in.

These kids grow up secure in the knowledge that Daddy's money can buy them out of the drug bust, the hit and run, the rape charge, the cheating scandal, the pregnancy, the draft --  Money talks is the lesson learned.

I recall one eighth grader's answer, when I was asking the class what sort of future they envisioned for themselves: "Climbing to the top of the ladder, stepping on others and pushing them aside," was Robert's response. And I'm pretty sure he was serious -- he wasn't a kid with a sense of humor. 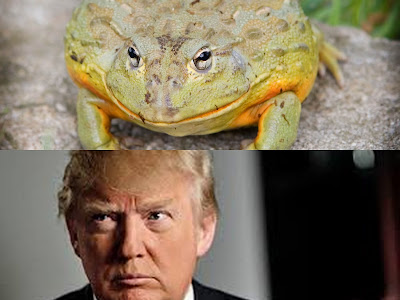 Mr. Trump's four bankruptcies -- no, the bankruptcies of four of his companies -- were, according to him, just good business decisions. Never mind the investors who lost millions -- he was able to walk away from a bad deal -- stepping on others and pushing them aside.

After Thursday's debate, I had a vision of a President Trump on the world stage. Forget diplomacy -- he would be the quintessential Ugly American -- loud, rude, determined to have things his way . . . or else. All those conservatives who were sighing over tough-guy Putin a while back have found their new hero.

And the GOP base applauds, flinging their collective panties at this boor who declares that he doesn't have time for political correctness. They sigh orgasmically even as he pushes out his lower lip and threatens hints that if he doesn't get the nomination, he'll run as an independent.

What does this say about the GOP? Nothing good, in my opinion. Trump's trumpet either drowns out the other voices (I'm thinking particularly of Kasich, who actually sounded like a compassionate conservative. Remember them?) Or the others try to compete with him in rudeness.

And the crowd goes wild. 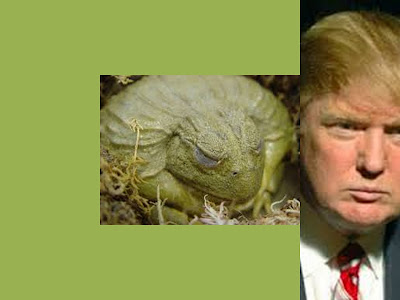 Email ThisBlogThis!Share to TwitterShare to FacebookShare to Pinterest
Labels: a little political, Trump

Great! If a little insulting to the toads!

I think it might be a good thing if he ran as an Independent. Maybe it would split the party into two camps and one would be the old fashioned compassionate conservative. I can dream, can't I?

I have been thinking that at least part of America's great division is that there are only two parties, unlike most other democracies.

Anyway ... enjoying your books. Downloaded the first (after reading the third) and actually found Under the Skin at the library -- the only title they have.

It would definitely be a good thing for the Democratic nominee if he ran as an independent.

I ran into a neighbor yesterday, a reasonable thoughtful man, a teacher, and heard him saying, to my surprise, that Trump has the right idea about immigrants. We just can't keep letting those people in, he said.

Honestly, unless you are a rich, white man, the Republican party gives no reason to vote for them at this point.

Also, the start of the political posts may end up keeping me off of facebook for the next year and a half.

I could not bring myself to watch even a minute of the debate. The idea that Donald Trump is the front-runner and Scott Walker is third in the polls is too impossible to imagine. We lived in WI when Scott Walker decimated Milwaukee County and couldn't believe that he was elected governor, much less run for President. But thanks to SCOTUS the money pours in. Your pictures are perfect.

Thank you for stating so eloquently MY thoughts on the matter! He has no interpersonal skills and zero tact I equate him (in my mind) to Kim Jung Un. That isn't the type of person we need.

First of all, I should apologize to the innocent African Bullfrogs whom I paired with this wretched excuse for a human being. The likeness is only skin deep.

I just read an article that said Trump's main support is among less-educated white men -- the same group worried about immigrants taking their jobs. Makes sense. Also, I suspect, the same groups annoyed by political correctness -- the Archie Bunked types out there.

Yes, Bethany -- I'd originally meant to mention Kim Jung Un as well as Putin. The likeness is there.

And, to clarify -- I didn't watch the debate -- I read the transcript and watched some clips -- we don't have TV at the moment.

I watched the (debate?). It was a waste of my time. No standouts. Just theatrical BS. Humpty Trumpty does look frog like and act frog like. Yes Trump running as an independent is a splendid idea.

So you don't like him then Vicki! He certainly put his foot in it today, didn't he. Who are these people then who give him support and why?

Uneducated, fearful white men -- for the most part.

My father tonight, who is a thoughtful man, compared the way Trump has captured the anger of the working class to the way Hitler did the same in the early 30's in Germany. Rather frightening thought!

Well said. The idea that people would actually want him to be president amazes and horrifies me. Whatever happened to noblesse oblige, btw?

The fact that people are applauding him is disturbing on more levels than I can imagine...

And he gets uglier by the moment...
Sam