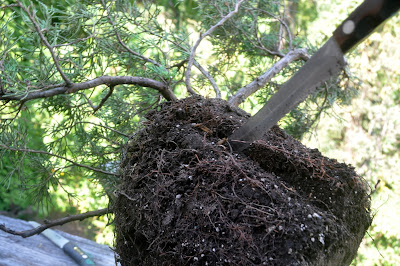 The weather has been glorious the past few days so it seemed like a good time to go out and attack some potted plants with a knife. 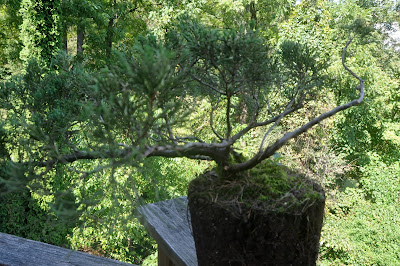 We have several large evergreens that stay out in pots year round and they have been in need of re-potting for some years now. They're quite hardy and pretty forgiving of under- or over-watering but they have begin to look a little ratty so the time had come for desperate measures. 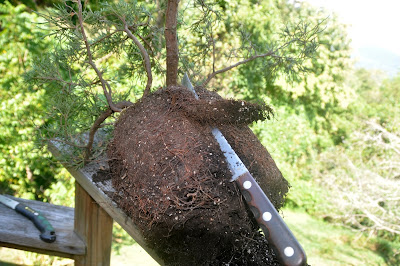 I began by sliding them out of their plastic pots. I can't plant them directly in the clay pots because freezing and expansion in the winter would eventually break the pots. And I don't want to step up to a larger size. So I root prune, hacking wedges out all around the root ball. I also slice off some of the bottom of the root ball. All this brutality will stimulate root growth and allow me to add some fresh compost to the pot. 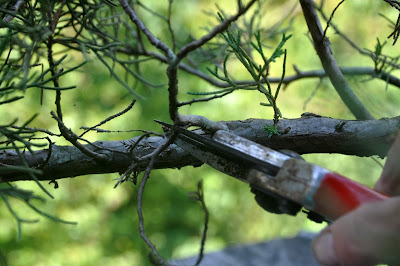 While I'm at it, I prune away any dead twigs or branches, as well as generally tidying up the look of the shrub. It's not bonsai, by any stretch of the imagination but its a really nice, meditative exercise. 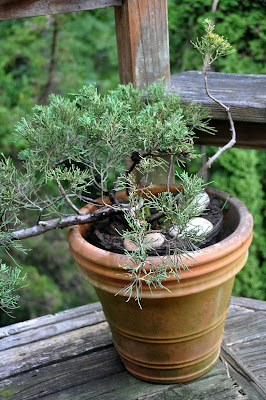 When I've returned the plant to its pot, added in lots of nice composted manure (a commodity we have plenty of,) and soaked it with water, I imagine that the plant is wiggling it toes and breathing a sigh of relief. It almost seems that the needles are already taking on a deeper shade of green. 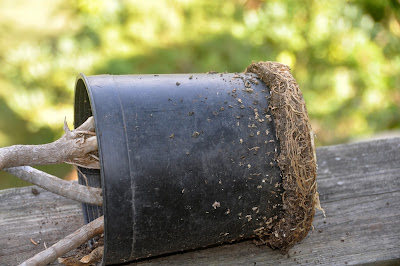 This poor houseplant (draecaena marginata) has grown its roots all around the pot. Extreme measures are called for, even to get it out of the pot. A little work with the pruning shears gets rid of this mess. 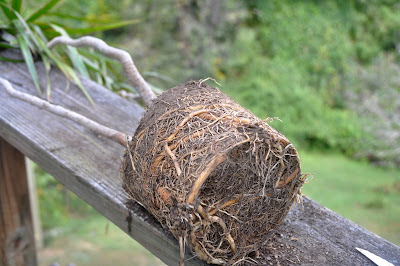 You can see how root bound the poor thing is . . . more knife work is indicated.

A few more days of this pleasant, messy work should have all my potted plants in fine fettle and ready for winter. The fine weather makes it a genuine pleasure. 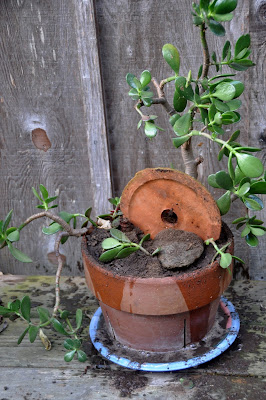 We've got a few that could use some work and bigger pots, too. I won't be the one doing that chore.

What a chore! But what a feeling to " wiggle one's toes" as you so well describe, together with the plants once the job done!

You really know what you are doing.

Good idea to do this...mmm, maybe I should follow your lead.

Well, I think it IS a bonsai. Meriam-Webster defines a bonsai as "a very small tree grown in a pot with special methods to control its growth." So I think you can say that you are growing a bonsai. Because I just love the sound of that word.

Taking a knife to plants gives one such relief of frustration. When I do that I assign each plant a name as I cut its roots or divide it.

You're full of wisdom. I can't even keep supermarket herbs going in a pot, though I have just about managed to keep alive a basil plant that a friend gave me.

Vicki, thank you for all the good information...and root surgery encouragement here.

In past years I always thought of transplanting my rootbound plants to larger pots, but you've given me a good alternative that will add to the plants' performance. Great time of the year for these procedures, too.

Did you hear them sing songs of joy after that wonderful treatment at your spa? ;-)

They sang and blushed a deeper green!