Lions and Tigers and Satanists, Oh My!

The OZ books were early favorites of mine, beginning in the third grade. The library at Roosevelt Elementary had most of them and several of my friends had more. I eventually acquired a near complete set, some of which have antique status now.

Recently I embarked on a return to Oz, partly from nostalgia and partly from a quest to find the scene in which there is a sea of soup. I think I even remember the illustration. But I was unable to find this bit, though I read (or skimmed, after the first three or four books, they grow a bit repetitive) all the books by Baum. (There are more by other authors -- Thompson and Snow -- but I haven't gotten to them.) 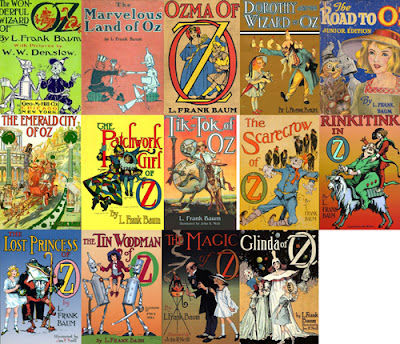 But that's not what I'm here to talk about. I want to alert you to the Dangers of Oz. In my internet search for the sea of soup, I came across a page on THIS WEBSITE  which links the Oz books to the Illuminati (you know, that shadowy conspiracy that is plotting to establish a New World Order.)

Anyway, I was shocked, shocked I tell you, to discover that, according to this conspiracy theorist, the Oz books are full of satanic activity and thinking. Baum was trying to say that 'we must rely on ourselves, that we alone have the power to save ourselves' -- just as Dorothy didn't need the Wizard to get back to Kansas but could use the magic slippers she'd had all along.

Sounds good to me -- but not to the creator of this document. He calls this self reliance 'part of the original lie of Satan . . . dressed up in different packaging and (distributed) worldwide as the most popular American fairy tale.'

The theorist goes to great lengths to draw links between Oz and Satanism. He provides a wealth of goodies, such as the damning fact that it was a cyclone that brought Dorothy to Oz and the word cyclone comes from the Greek word meaning snake. Ergo, a snake (Satan) took Dorothy to Oz.

There's more, oh, so much more. Dorothy goes on a quest. New Agers and Satanists go on quests. (See how easy this is?)

The Emerald City is green. Seems innocent enough but wait! Green is the fourth point of the Eastern Star (Women's Freemasonry -- and Freemasonry is tied to the Illuminati.) Green is also Satan's color. Did you know that? Neither did I but this guy at American Patriot Friends Network does.)

Wait a second -- it's becoming clear. Jade Helm.  Jade is green. No wonder those patriots in Texas have their panties in a wad.

The depth and breadth of crazy out there is really astounding. 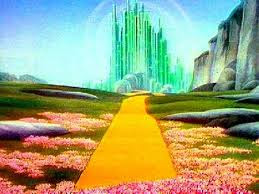 Oh my Oh my... should I continue to have you on my bloggers' list? :-)))
It's amazing what we can read on the web, ignoring all of these theories is not an easy thing, it comes back over and over.
I personally prefer to stick to the magic of Dorothy's journeys alone and I hope you can find this "sea of soup" before you hit some more bad stuff.

I have no way of knowing what the intent may have been, by Baum, or whoever, but I sure never saw it that way and still don't.

Gosh Oh My dang it. I never knew that about OZ. How could I be so stupid? My fantasies verses the devil worship fantasies, I will take mine thank you! The evil in the world is internally generated. Everywhere you see bad things happening it comes from within the human spirit, yet we have to have a devil or Beelzebub or Satin that caused the evil. Next thing you know Disney Land will be hell itself.

I also loved the OZ books and remember many a rainy day reading them. I read them during the summer between third and fourth grades. I never owned many books as a child since my parents thought that's why we had public libraries. Perhaps that's why I now own far too many books.

To the people who feel inclined to find all sorts of hidden meanings I say, "Sometimes a book is just a good read. Nothing more."

Vixki, I think that I've heard about these Oz theories before. Crazy stuff, huh?

I love that photograph of the array of the book covers...what great designs with their circus'y colors and lettering. Fabulous.

I love this post. Read it yesterday but didn't have time to comment. The Oz books were an important time in my life. xo