Guns for Peace of Mind 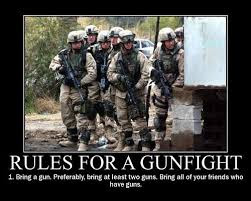 Yesterday on Facebook a local entrepreneur who is rehabilitating an old theater in a nearby town posted the following notice: "When _____ opens we will welcome sane law abiding adults with legal hand guns. I want anyone who entertains the thought of harming any of our patrons to consider the fact that they may be sitting next to a glock." 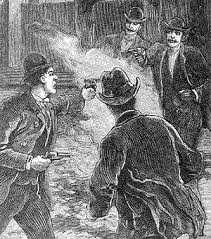 Living where I do, I have always known that others may well be armed. Even if one is a Southern Lady attempting to be polite at all costs, one is far less tempted to flip off a rude driver who is likely packing heat.

Still, I and quite a few others found this open invitation a bit unsettling, not to say appalling.  To a woman (yes, it was all women, at least as I'm writing this,) we announced our intention of never patronizing his theater. (There was one woman who applauded the notice and said she would be there and she would bring her gun. And a man applauded the theater owner for having the cojones to post this notice. But the reaction was mainly negative.)

The theater owner responded that he was concerned for the safety of his patrons, hence the welcome sign for legal and sane gun toters.

Some of us asked how he planned to determine legality and sanity -- one pictures little interviews with each customer before entering the theater. Others accused him of fear-mongering and/or publicity seeking. Various statistics were cited but it was all done in polite and measured words. 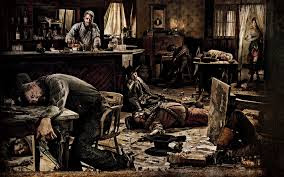 Then came another dissenting voice, a fella (whose profile pic shows him leaning against a church pew) said, and I quote: "Shut the hell up I will be there with bells on Liberal trash this is madison co go back to your wimpy spineless gun free high crime rathole you came from"

Though, as I've mentioned before, I own a gun and have a concealed carry permit, I would not be at all comfortable sitting next to this angry guy -- and imagining a whole room full of similar folks is enough to keep me away forever.

And what if the fella below was in the seat on the other side? 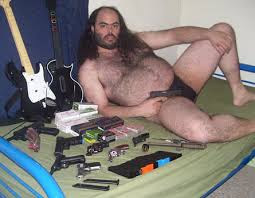 Email ThisBlogThis!Share to TwitterShare to FacebookShare to Pinterest
Labels: guns

Gosh, I'd have to give some thought to how I'd feel about all that. Kinda torn both ways.

This is so weird for those of us who live in ...

I don't know what to say, "more civilized" countries seems wrong or condescending, but ...

First thing comes to my mind is--Lots of people own guns but take them out once a year and "practice" for a half and hour shooting cans against a dirt bank. The problem is the first time someone else has a gun pointed at them they will likely shoot themselves in the foot or kill two innocent bystanders. Worst of all they will freeze and the other guy with murder and mayhem on his mind will start shooting and kill several people.

To confess I have a shot gun and bird shot shells. It's unloaded and by the time I get it out and load it the house breakers are probably already inside.

It surprises me Vicki that you have a hand gun and a permit to hide it. Sounds like real cloak and dagger secret agent stuff.

I just realized and posted on FB -- where this also sows up -- how weird this must seem to my friends in England, France, and Austria. I should have added Canada, AC. Yes, more civilized is absolutely accurate.

I own a gun because my husband insisted that I know how to use one and have it in the car as, in the course of doing book related events, I travel alone -- and sometimes in remote places. I got the concealed carry permit so as to be legal about having a gun in the glove compartment and as a bit of research for a scene in the book OLD WOUNDS.

Living on a farm in the country, owning a gun makes sense -- I myself have used one to put a dog with a broken back out of his shrieking agony rather than submitting him to the hour long trip to the vet for the gentler needle. John shot and killed a copperhead recently. There have been other incidents. But we're not hunters. And not gun nuts.

My father taught me to shoot when I was a teen. I owned a gun when we were living in a country cabin while our new house was being built. The cabin was off a dirt road and I was isolated there with two small children. We gave the gun to a police officer when we moved into our new house and I've never felt the need to own one again.

We think twice about hiking in our beloved National Forests now that folks are allowed to be armed on the trails.

That last photo is scarey on sooo many levels!

Jeepers, Vicki. This truly does freak me out.

My own mom thinks I am naive for not owning a gun. Just yesterday, there was an incident near a subway station that I regularly use (like this morning) that resulted in two deaths, including that of the shooter. That also freaked me out.

Yet, I have absolutely no desire to own a gun.

Simply said, I'd never go and watch a play in a place like that because I'd be scared out of my mind.
The last picture says it all.

You know how much I love your part of the country, and the sane people who live there.