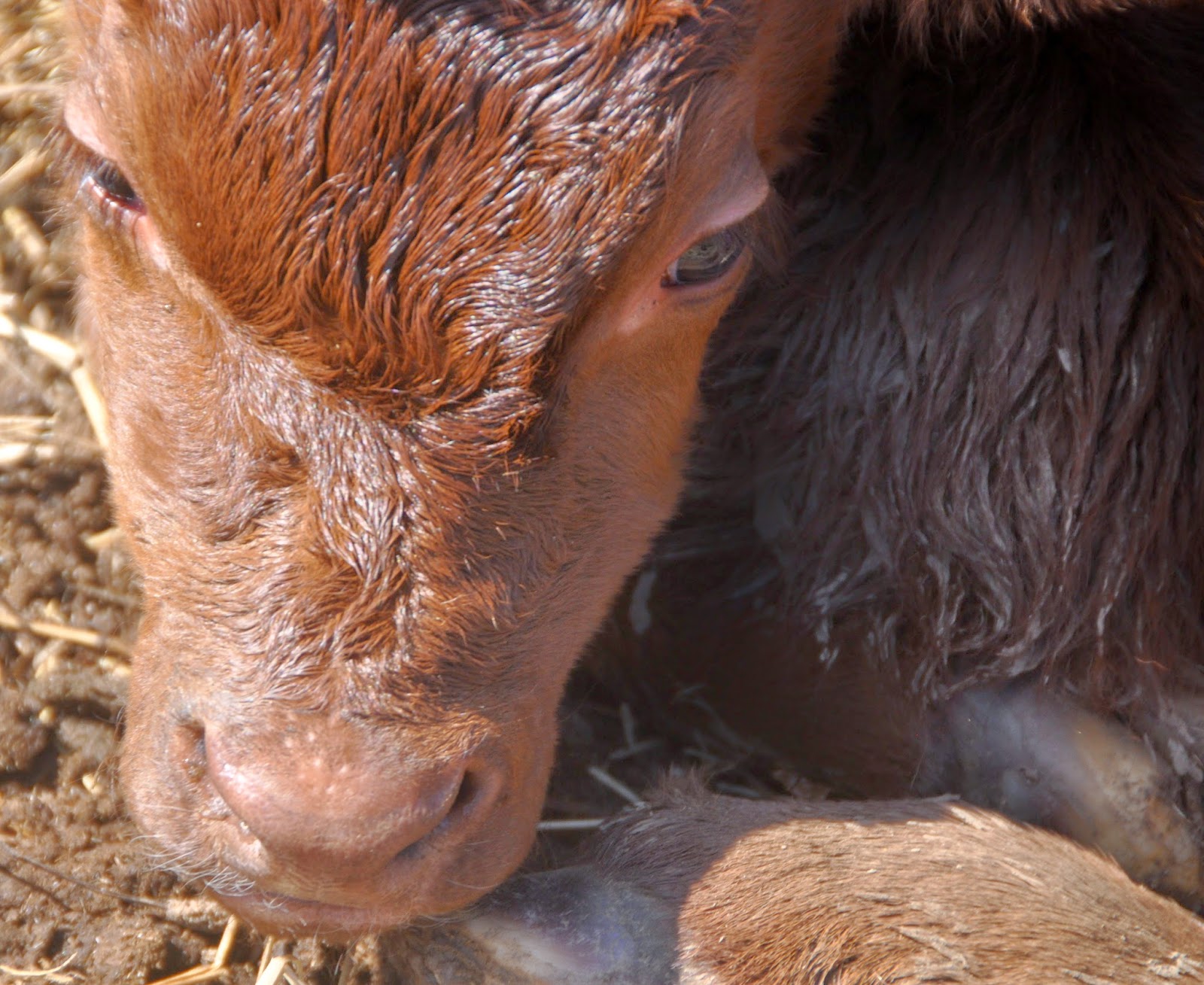 Xena (the calf Claui rescued from a coyote a few years ago and whose story I told HERE and ALSO HERE) had her first calf on Saturday. She seems too have passed on the gene for good luck in getting saved. 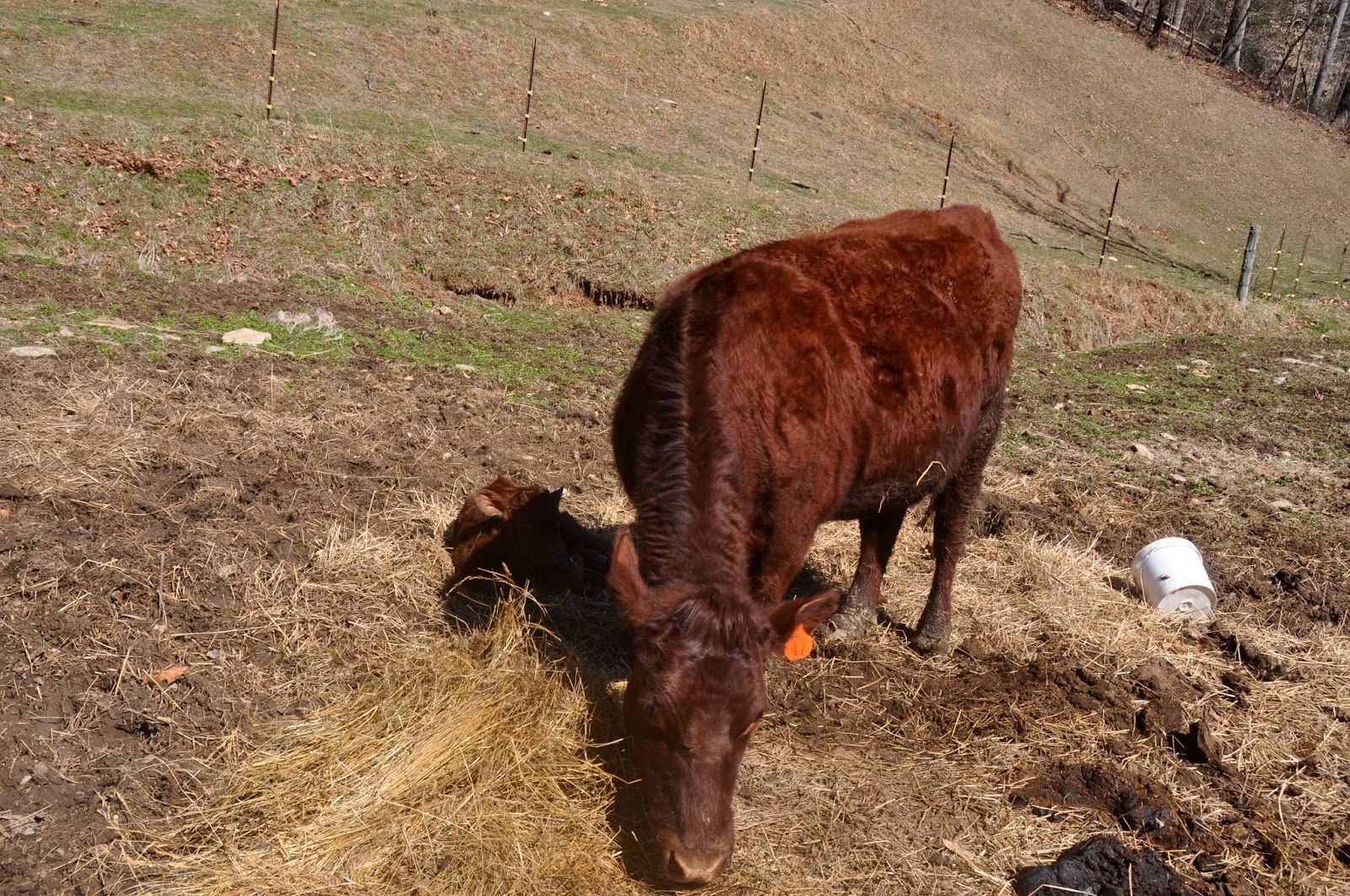 Justin and Claui and John had been keeping an eye on Xena for a week or more. But as of Saturday, nothing seemed immanent.  Justin and Claui were away and it was sheer good luck that  John, who was taking Otis and Ali back home, went out into the pasture to take a look. 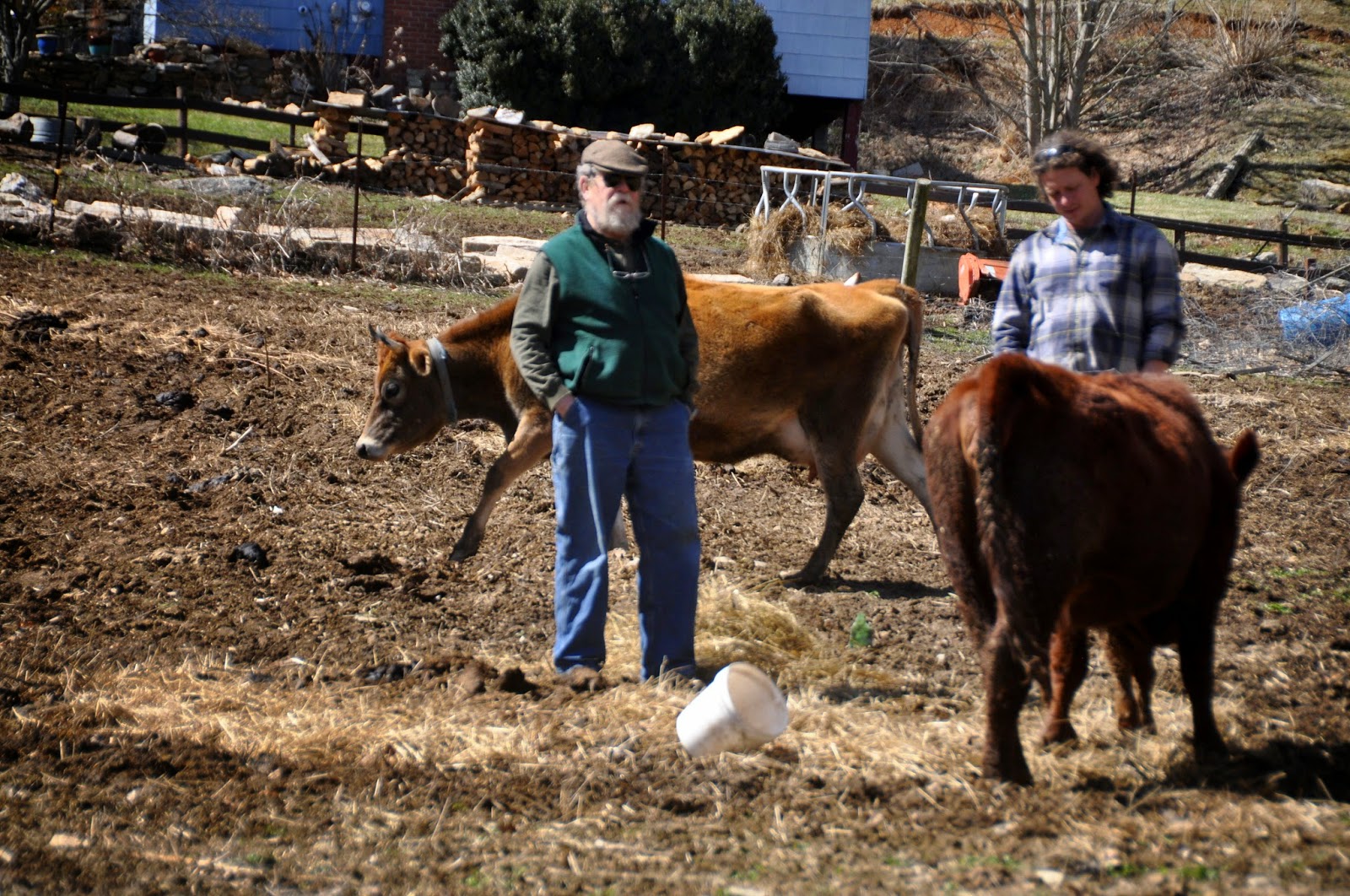 He found a very, very (still slimy) recently born bull calf lying in the branch (creek.) Evidently Xena had given birth on the upper side of the fence in picture two and the calf had slid under the fence and into the branch. 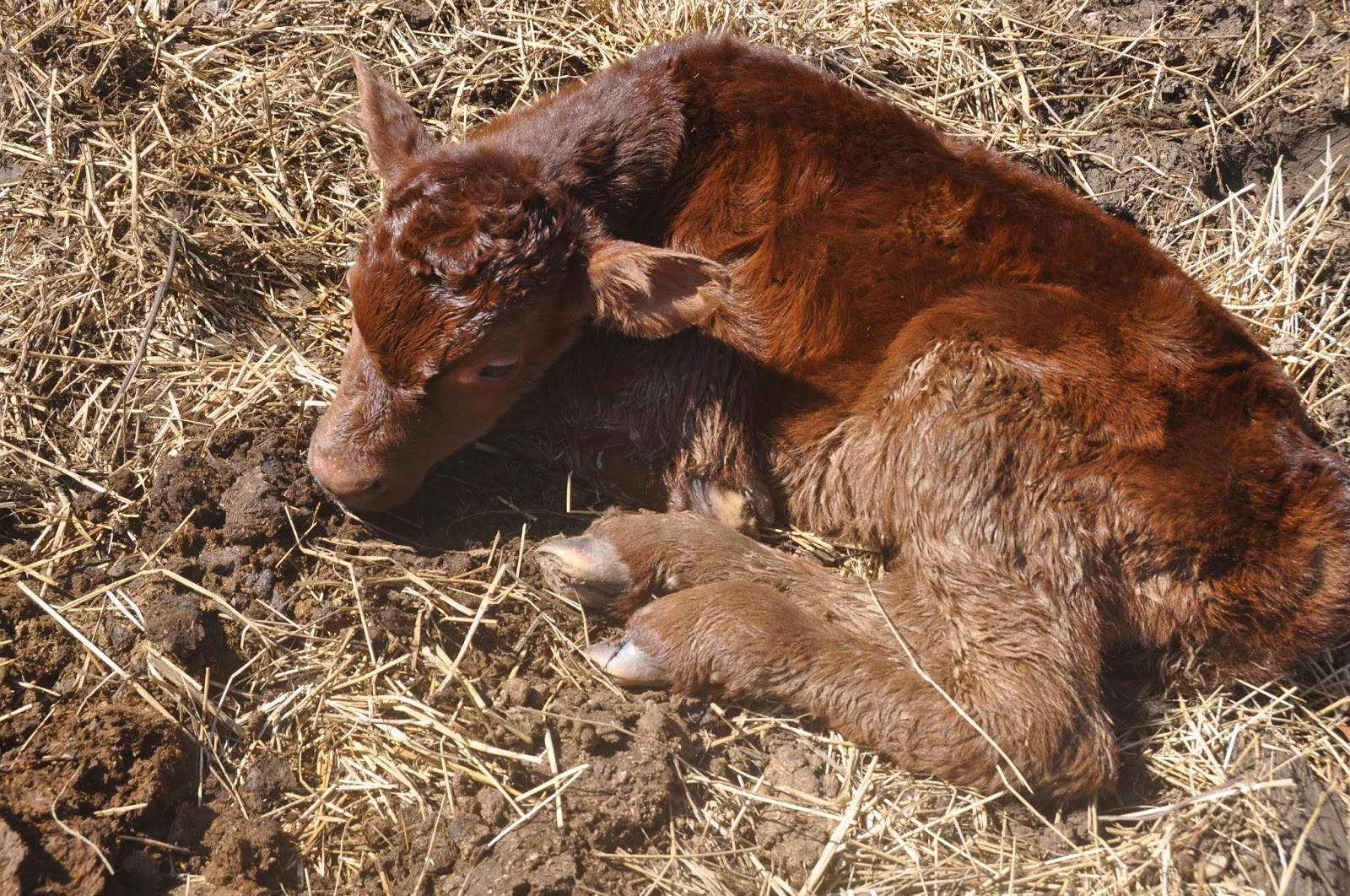 John got the calf out and to a nice pile of hay. He and Claui, who had arrived while the rescue was underway, dried the baby off and made sure it knew where the milk bar was. 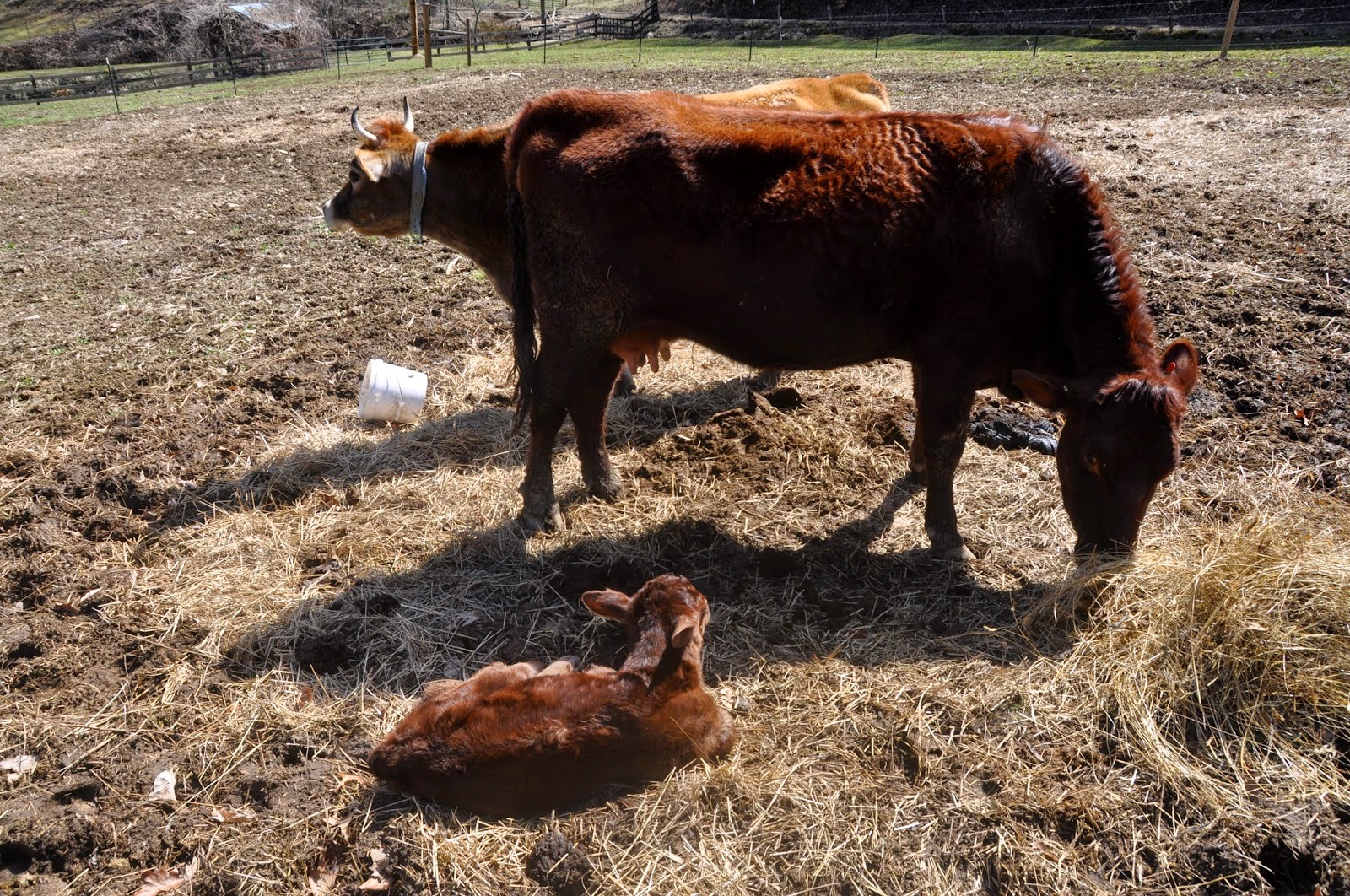 These pictures were taken the next day and the baby, whom Claui plans to name Xavier, is doing fine after his perilous beginning.

There's Bob in the picture below. Off leash and just about to be chased by Hazel. 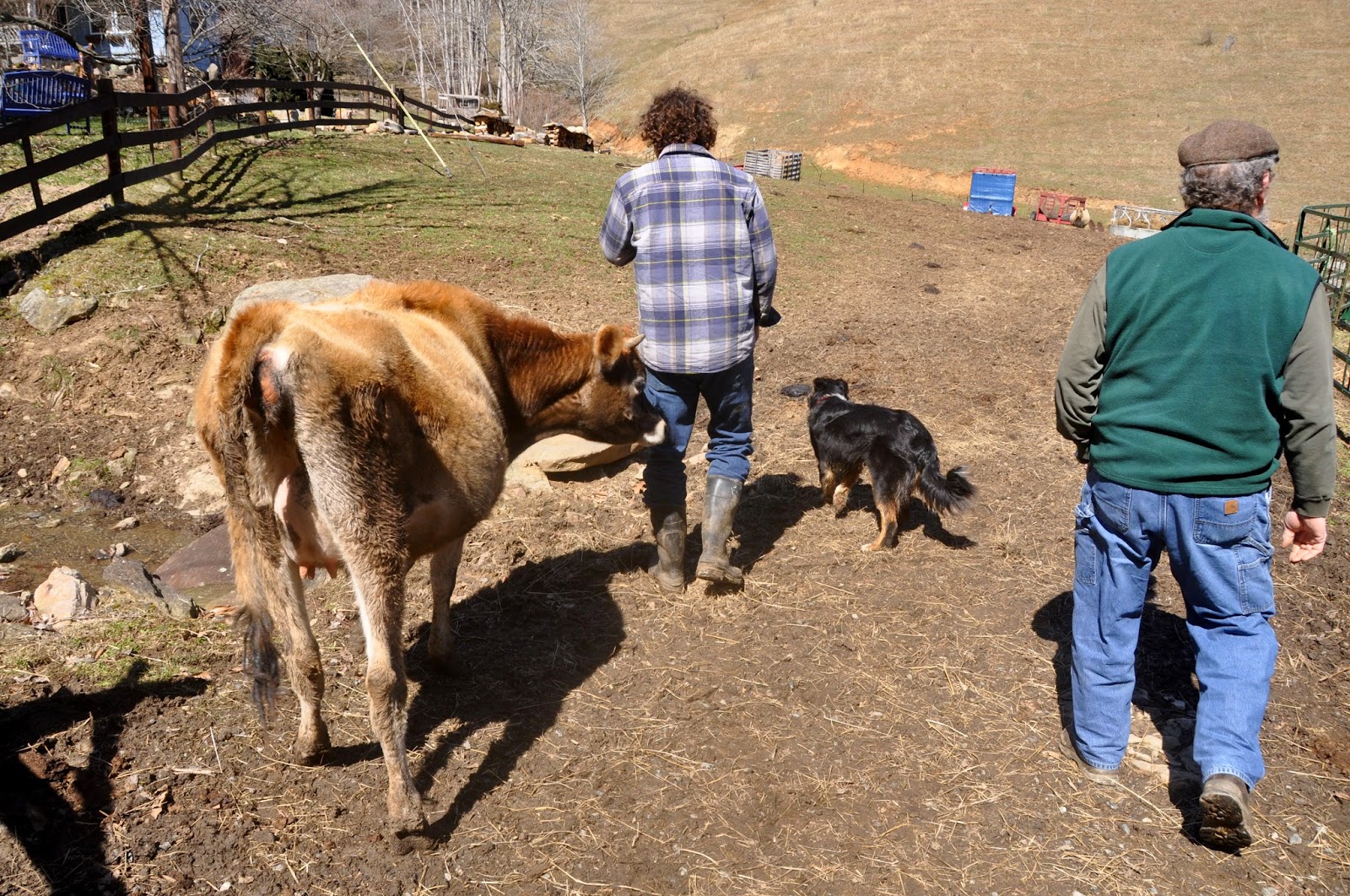 Email ThisBlogThis!Share to TwitterShare to FacebookShare to Pinterest
Labels: cows

Xena's head in the first picture looks nearly like a sculpture! So many happy adventures on your property,it is such a pleasure to read about them.

Relieved to hear everything worked out alright. Good thing John was there! Can't imagine how cold that Carolina water was, especially in winter. It's cold enough in summer!

So many adventures! Yay for newborn bulls and rescued calves. Glad Xena passed on the luck gene. I'm sure good things will come to all!!

John to the rescue. Baby and mother are indeed both very lucky.
Sam

i am glad the calf got saved....oy, not a bad thing to have running in the family....

Another story that can be added to a book someday, I'm thinking! Great to hear it first here!

Vicki, best wishes to Xavier and Xena. John's sense of timing is perfection, no?

Bob springtime is going to be full of photo ops. (Maybe even a little video, perhaps?)

How very fortunate that John came by when he did. Or that the delivery wasn't in the deep snow. What a heart-warming story. Lucky calf and lucky mother.