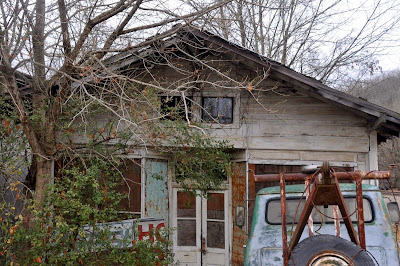 W hy was I parked just to the right of this derelict blue truck for several hours yesterday? Because my friend in Tennessee sent me a heads up that there would be a steam train excursion from Knoxville passing through Marshall on its way to Asheville yesterday and today. The train was scheduled to leave Knoxville at 7:30 am, arrive in Asheville's Biltmore Village at 12:30, and return to Knoxville, departing at 3:30. 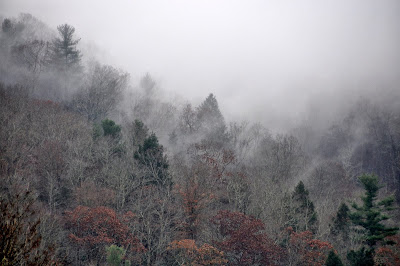 With no way of knowing just when the train would pass by the bridge at Barnard (only a few miles from our driveway,) I decided to be there around 11, believing that the run from there to Biltmore wouldn't take more than an hour. So I set off... and parked next to the tracks where I would be sure  to hear the train coming and get a good shot. While I waited, I took pictures of the surroundings . . . 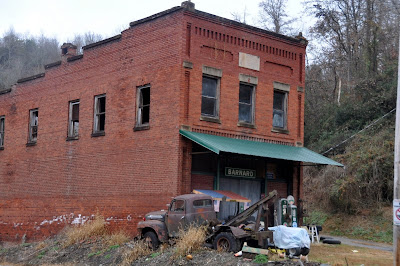 Back when a passenger train ran through Barnard twice a day, these empty buildings were stores and Barnard was a lively spot. 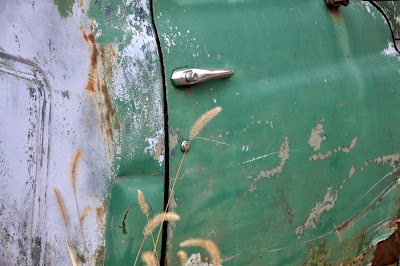 These babies haven't gone anywhere in a while... 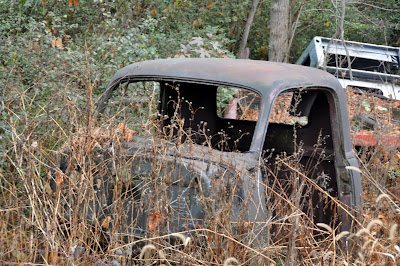 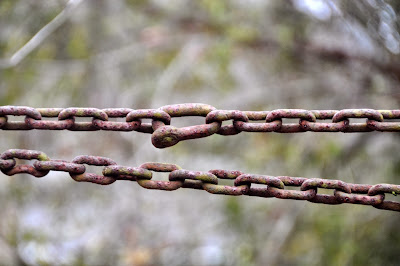 Monte Love Gudger's store was built a hundred years ago -- my fictional Gudger's Stand is set here at Barnard ... 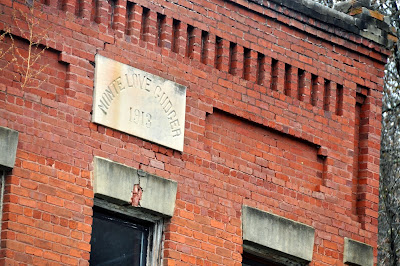 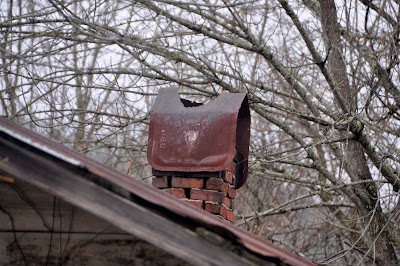 What's that I hear?

Sounds like a train coming! It's almost 12:30 but better late than never... the crossing bell is dinging and the gates are going down. I'm in position for a shot as the train comes around the bend...
Oh, cruel disappointment! That is not a steam train! It is a very ordinary freight train without even any interesting grafitti. 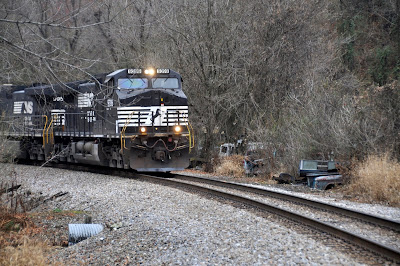 I waited another hour . . . no joy.
And no idea if the steam train had been early, late, derailed, or cancelled. 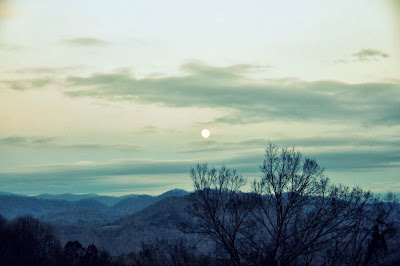 Back at home, I went out around 6:30 to get a picture of the rising moon. And down in the river valley, I heard the steam train chuffing along and heard its multi-toned whistle as it ran through the twilight, on its way back to Knoxville. 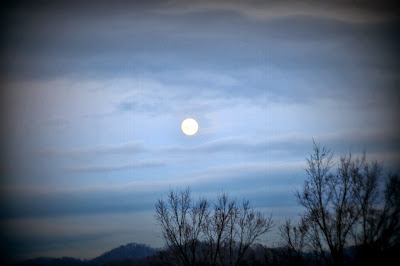 Bummer! But you still got some great shots! Maybe next time.

I love the tribute to Magritte countained in your title!

Oh, I remember that spot, right after the bridge over the big river!

No steam train but still some evocative photos. There are occasional steam excursions through Saltaire and it always seems like when I go to take photos, that's the day it's cancelled - so I share your chagrin.

Vicki, I appreciated your photos of the ghost town of Barnard, as they brought me memories of a college classmate whose family lived there.

She was a very sophisticated young lady who introduced me to the music of jazz master Mose Allison.

All this was a long time ago. I have no idea where my classmate might be now. I wonder what lead to the transformation of Barnard.

I do hope you get to see the steam train.

I would have tried too, but while waiting, you got some marvelous pictures of old things, some sad in that things change and buildings are abandoned, and people leave. Other hopeful, reminding us how beautiful nature is. For me this was a story, much more than waiting for a train, a story that for me ended with nature, we better take care of her or she will go the way those old abandoned buildings and trucks. I love this post.

sorry you were disappointed...you did get some cool texture shots of the old vehicles...i would love to ride a steam train...the regular trains have been going by our hotel....i like their sounds...smiles....took in 12 years a slave at the fine arts theatre last night....whew...dang....

Vicki, now I am laughing at myself...it was Brevard, not Barnard, where my college classmate lived.

We are the richer for your wait for the steam train! thank you for sharing.

I'm so sorry! I didn't mean to sent you on a snipe hunt. I re-checked the Tennessee Valley Railroad Museum's web page and they indicated the trip was sold out both Saturday and Sunday. I can't imagine what happened. :(

Too bad about the no show, but your shots of old buildings and old vehicles stimulates the imagination of their lives long ago.
Vicki I really like your photography. Some of it is journalistic and some artistic. Your closeups really are good. Thanks for sharing with us.

There is such beauty in old things, showing not only the passage of time, but the passage of people. Thanks for sharing, sorry that your wait for that train didn't work out the way you hoped.

Alas, I found out that the train yesterday had probably just gone by when I arrived. And I wasn't able to get there this morning. One last chance this evening but it's raining kinda hard right now ...

Frances, I was puzzled at the thought of a sophisticate from Barnard -- Brevard makes more sense. (I love Mose Allison -- Creekbank Trio, was that the name of one album?)

I didn't mind the wait -- I spent a fair amount of time looking for pictures and then sat in my car with a sewing project. Quite a peaceful way to while away a few hours.

Thanks for the kind words!

Fun to know Gudger's Stand is set in Barnard! Great pictures of the place, but the moon shots are my favorite!

I like all your pictures of Barnard. About the steam train – it would have been nice to see. I wish I had taken pictures of all the steam trains I took – every day to go to high school in France, but I never did. I was so amazed to see, at the New Orleans train station last month, that only a couple of trains came there. But then, last Thursday we were in Grand Central Station in New York City- and there were loads of trains there.

Unpredictable train schedules are sure common across the U.S. Too bad you got caught in its unpredictability. But you found some great small town Americana through some nice photos that offers some info on our declining back-country. Too bad we are losing so much of it but photos like yours document what we had at one time. -- barbara