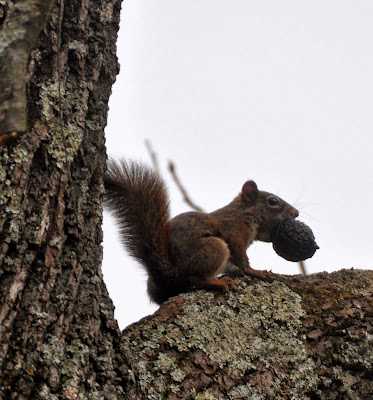 Back on Saturday, when we were finishing up with butchering chickens, Justin had occasion to go down to the pond to check on the cows and he came back saying he'd sighted a red squirrel -- what they call 'Boomers'. He took my camera and hurried back to the pond where he made these pictures. 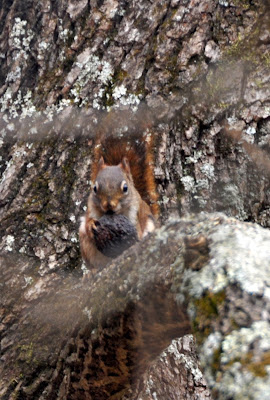 This is the first sighting of a red squirrel by any of us in all the years we've been here (since 1975) -- we were told they used to be around here but had been hunted out.   Of course, the same was true of gray squirrels, deer, and turkey -- we didn't see any of those during the first ten or so years we were here. 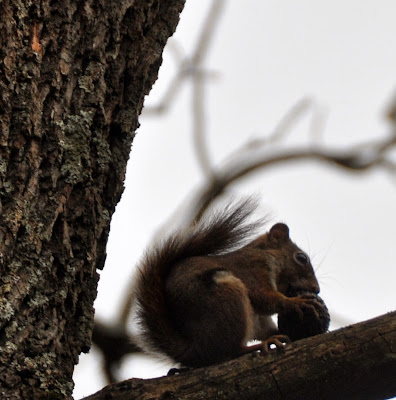 American red squirrels are considerably smaller than the more common (around here, at least) gray squirrels, one of whom I posted pictures of a few weeks ago. The red squirrel's tail is less bushy and they have  white rings around their eyes.  Normally they hang out at higher elevations, where there are  more conifers but this fella is working hard on a black walnut.

It's so exciting to have new neighbors! 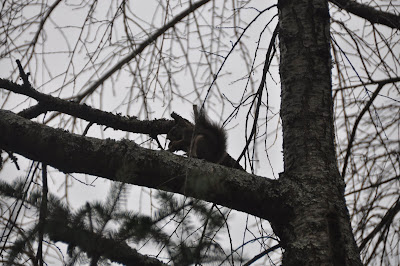 It's a cutie! Would you have believed him without the photo, since you had never seen one around? Nah, surely not. LOL!

I have never heard of red squirrels! Very unusual. Have you ever seen the white squirrels in Brevard? I wonder what would happen if a red squirrel hooked up with one of the white ones from Brevard... maybe then there would be a new breed - "pink squirrel?" ;)
On another note, I am so excited! I have been waiting YEARS for that "Nuts and Bolts" beginner class to be offered again. I signed up the very day the email went out!

We do see boomers once in a while but are overrun with gray squirrels. There are always boomers on the way up to Mt. LeConte, they beg food from hikers. Have you noticed there are no acorns this year? NONE. Black walnuts are about the only mast crop in abundance. No hickory nuts either. Not good for the bear population, or other wild critters that depend on mast for winter survival.

Handsome fellow, and I'm glad you spotted him. WE have a kind of red here in the Blue Grass, but it's markedly bigger than the gray. And we've seen few of them in the last few years.

Every now and then I see one of these quick, shy little animals, and every sighting makes me happy. I know they're a little . . . delicate about their environment.
You got wonderful pictures!

i love sqirrels....most of ours are grey squirrels...i was remarking to someone the other day that it seems like there has been a population explosion of squirrels this year....they are everywhere....

Funny us being squirrely together today...I've got a squirrel over on Black Mountain's blog...and doves.

We have at least 3 boomers around our place, and I've written about one we call Onearm...some time back she was coming to our bird feeders and I saw her damaged leg, poor thing...so we started providing nuts for her specifically. Her leg is now healed (but still missing the paw)...she has adapted beautifully and she's become a "wild" member of our family.

Vicki, great to see these photographs! I don't think I have ever seen a red squirrel on this side of the Pond.

Interesting to read that there might be an acorn shortage this fall. I'll be keeping an eye out during my next Central Park walks.

He is a great looking red squirrels. We have them hill. In southern Iowa they have black squirrels. They don't seem to migrate north.

Here in Central Missouri we have both red and grey squirrels. We also have an abundance of Walnuts if your squirrels need more!