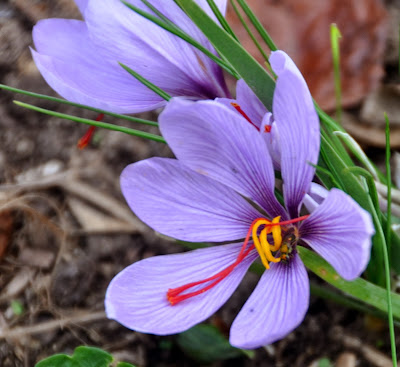 The saffron crocus is blooming -- I almost always forget about it and am pleasantly surprised when it appears. I have one small clump this year -- I think there were originally three bulbs that I planted maybe fifteen years ago... 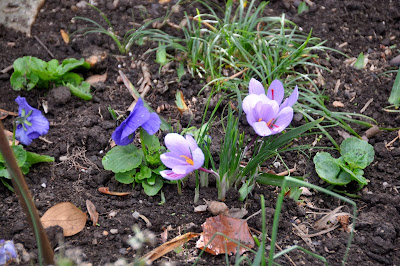 Saffron is said to be the most expensive spice -- and no wonder. See those bright red-orange stigmas -- three in each blossom?  It would take 50,000 to 75,000 flowers to produce a pound of dry saffron. Of course no one buys a pound at retail.  At retail, saffron sells in tiny amounts -- .06 ounce for $16.26 -- which would equal (if Wikipedia is to be trusted) $4,336 per pound. But if you're willing to spring for the entire pound, the price plummets to a mere $2,000 a pound, a veritable bargain! 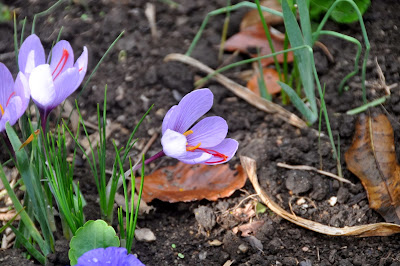 These pale leafless apparitions below are a puzzlement. I don't think I've ever seen them before and I wonder if they are perhaps new saffron from divisions of an old bulb or what. If any of you know , please tell me. (I don't want to get all excited at the thought of more saffron if these are something else...) 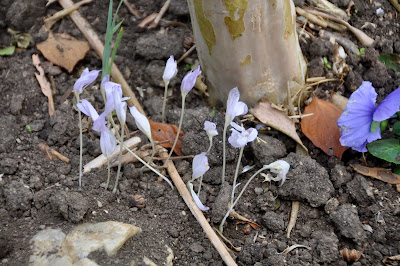 In any event, here's the saffron harvest for 2013 -- our quality control officer is performing a meticulous inspection. 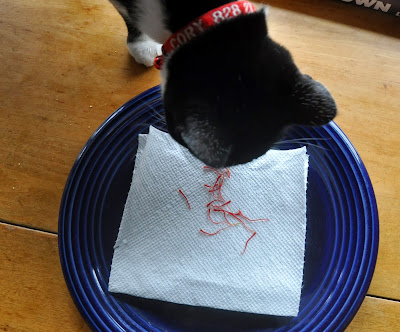 Looks like calligraphy from the mysterious East, doesn't it? 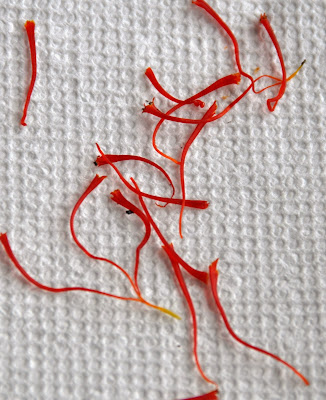 They do look a little like calligraphy and they look so cool in the flowers, too!

ha. it does look like calligraphy....smiles...at that rate you might be collecting a while to make any money on it...smiles..

Vicki, what a pleasure it's been to have a catch up on your recent posts. Your saffron crocus harvest is spectacular, in quantity and beauty, too.

I absolutely loved the Graveyard post. You perfectly interpret a place and time. And you reminded me of a Virginia neighbor from long, long ago whose name was Geneva, the only Geneva I ever knew. Of course, back then I was a child and she was a grown lady with her own children. I don't know that she ever was known for dancing.

I never knew about Autumn crocus, how lovely, and to have a saffron harvest is quite the bonus. Lovely.

I've just heard of saffron, and seen the spice bottles in a few shops...maybe have eaten it in something or another...but never seen it growing. What an educator you are! Thanks, Vicki.

Oh my goodness, how fortunate you are that you have saffron crocus growing in your yard!!! I enjoy cooking with saffron, and the good thing is, even though it is the most expensive spice, it only takes a tiny bit to bring out the flavor to a recipe. I must admit, I am envious:) I'd love to hear about your favorite saffron recipes...

That's one of two spices I brought home in my suitcase from Crete last year...a good-sized package of saffron was quite inexpensive. It's stored carefully and used sparingly... ;-) So happy for you to harvest a few strands -- gorgeous color to them!

I've never really known what to do with it, but I love the colour of it. It's even more stunning against the purple petals.