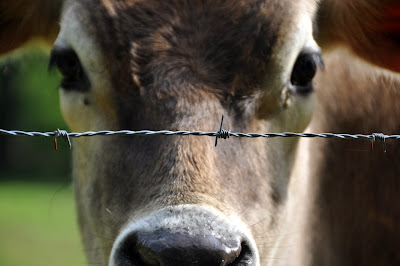 Law, what about that pretty little heifer! My,  she's growed like one thing! Looks like she's got her eye on that bull calf over yon.  He'll make you uns a fine bull, now won't he? He's got some Jersey in him too, I'd say. But he didn't get the horns, did he? That's lucky -- save you having to de-horn him -- I like a muley bull, don't you? 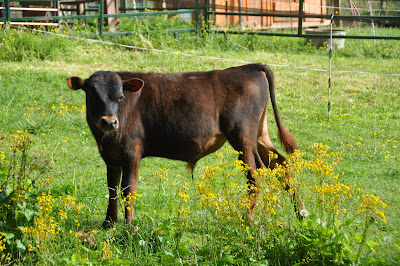 I had to laugh the other day --Bernice had brought her great grandbabies over to see me and we took those young uns for a walk up this way. They live in the city, you know, and they think it's a fine thing to  see cows and chickens and such.  You uns' gang of critters was in that pasture by the road so we stopped to look. Little Ashley pointed at that horney heifer there and hollered out, 'Bull!'
'No, honey,' I told her, 'that's a little heifer and once she has her a calf, she'll be a cow. Look yonder under there, you can see her little milk bag.' 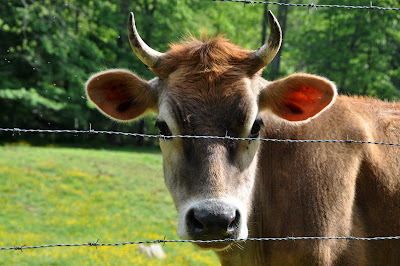 Our daughter took the twins on a visit to a neighbour's farm last week. I couldn't help thinking how lucky they were, to get to feed new lambs, and take in the wonders of the countryside. I'll have to remember the term, "muley cows".

I can't say a word, I'm pretty ignorant myself.

What a wonderful teacher you are!!

haha....well at least not they are lernt...funny listening in on the farm convo...guess they face the same challenges we do huh...smiles.

I had never heard the term 'muley cows' till we moved to western NC. And I was (and still am) ignorant about so many things. But I love learning new stuff.

Thanks for the little taste. So refreshing this morning.

Great to hear from Miss Birdie again with the livestock lesson. Any chance we'll hear more from her?

Friko -- this is the way the older generation speaks (or spoke) here in western North Carolina.

Lynne -- Miss Birdie will definitely show up here, now and again. I was writing this post in my own, somewhat pedantic,voice and Miss Birdie elbowed her way in, saying I had ought to talk plainer.

Some of Miss Birdie's forebears are recognizable in the book I'm working on -- beyond that, I can't say..