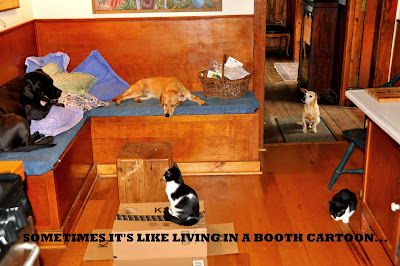 All that's missing is the dangling light bulb and me at the ironing board.  As Wikipedia says of George Booth:

Over time, his cartoons have become an iconic feature of the magazine (The New Yorker.) In a doodler's style, they feature everymen beset by modern complexity, goofballs perplexing their spouses, cats, and very often a fat dog. One signature element is a ceiling light bulb on a cord pulled out of vertical by another cord attached to an electrical appliance such as a toaster.

Our server is being difficult and doing ANYTHING on the computer takes far too long -- we are trying to remedy the situation but till then, I will be posting minimally and visiting when time allows . . .

I miss my pets! I got along much better with them, than most people.

No pets here. But your picture reminds me of how much fun they can be.

ha. they keep you entertained though dont they...smiles...just the one cat right now...and he demands enough...smiles.

Great furry family. Mine includes some fins too, and I am trying to give them away. Sorry to miss your excellent pictures and stories, as well as your presence...be back quickly!

Vicki, as I saw this photograph, I immediately got the Geo. Booth connection! You are both very amusing folks.

Best wishes to you and your computer...what you're now experiencing is surely not so amusing.

Wow. I'm amazed you got them all in one shot. Great job! Had to laugh at the one kitty sitting on a box (of course).

Have a great weekend.

Good luck in remedying your connectivity problems. How well i understand computer problems!

I have days like that here too Vicki when it takes forever to open a programme or switch from one to the other. It's frustrating isn't it. The photo is lovely, a happy home filled with animals and love - just as it should be.

Love this photo. Need light bulb but maybe also a frizzy-headed woman!probably could find one!