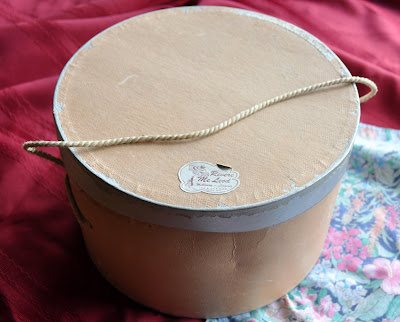 Rummaging through a closet in my workroom, I came across this relic of a gentler and almost forgotten age -- a pink and silver hatbox from Tampa milliner Revere Mcleod.

Back in the Fifties, we wore hats and gloves to church -- if memory serves,  at eleven years of age, I even wore a hat and gloves to ride the train to Camp Junaluska in 1954, the summer after the sixth grade.

My hats didn't come from Revere McLeod -- more likely from the local Belk's -- but my mother's did. 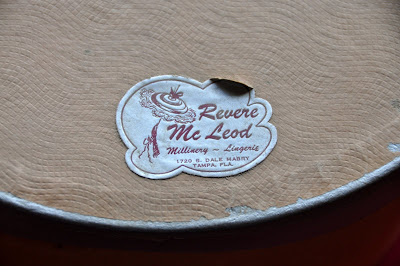 The only time I remember being in McLeod's was in the summer of '63, during the interesting/agonizing tribal ritual of shopping for a trousseau -- not something I really cared about but a necessary part of getting married as far as my mother was concerned.

By then,  I had rejected hats and gloves. But within the hushed and perfumed sanctuary, Mrs. McLeod tiptoed across the thick carpet, pulling open drawer after drawer to tempt my mother and me with beautiful lingerie, waving before us lovely lacy nightgowns and peignoirs on padded hangers that she whished from behind mirrored doors. 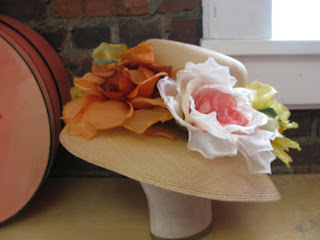 It's been almost fifty years so I don't remember what we bought -- I think a nightgown and peignoir set and a pretty white half slip with blue flowers embroidered round the hem.

But I do remember almost rethinking my no glove policy as the proprietor pulled open the shallow drawers of kid gloves, each pair in its own little compartment. There were some like these below; there were some embroidered with tiny flowers -- it was a pair with a scalloping of pearls at the wrist that almost tempted me back to a lady-like lifestyle. 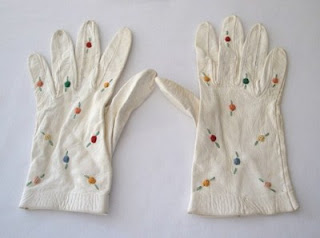 I loved this story

My goodness, such loveliness, a delight to scroll through your images and read your memories of the days of hats and gloves.

Both your hat and the gloves remind me of my great-aunt, Theresia, who continued to wear both, and with grace, into her late eighties.

I'm left wondering if hats will ever make a comeback, Vicki. I guess it's a possibility, but not as we know them.

ha. what a cool memory...made me think too in relation to downton abbey...been watching it with my wife...interesting how formal they are...i am not much for formal...

I live in jeans these days.... not that I ever had that kind of hat & glove elegance, but even I think I've let standards slip a bit!

Well, I'm 76 and I remember those days vividly. With our first baby grabbing at my hat, I gave up hats. With the second baby, I gave up gloves; with the third baby I gave up earrings. With the fourth baby, I gave up church until my husband was out of training and could be home more to help me! Now days, the hat boxes are more valuable than the vintage hats. When my father died, I gave all his gentleman's hats and boxes to our local university's drama department.

What a great story, Barbee!

Certainly times have changed with appropriate wear. So glad about that. -- barbara

Vicki, since I do believe that you and I might have grown up around the same time, this post resonated with me in so many ways.

Please do keep that hatbox!

It's amusing to see 20-somethings nowadays adopting many retro styles, complete with hats and gloves. Some do it with a touch of irony; others seem to feel a true affection for that era of feminine style.

Of course there's also a article on the first page of the Sunday Review section of today's New York Times, meditating on the 50th anniversary of Betty Friedan's Book. I remember reading that book as part of the required list for freshman orientation week as I headed off to college in 1963.

Goodness Vicki, this comment's getting long, so I will stop right here. xo

What a lovely story, and such poignant photos.

How romantic, vicki! But how lovely at the same time. I still have my weddingdress and matching gloves, which I never wear anymore.