Gold in the River 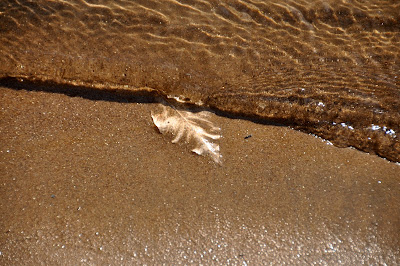 I stopped at the river to take some pictures yesterday afternoon
and this leaf, shimmering in the shallows, caught my eye . . . 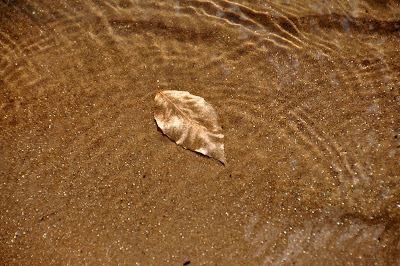 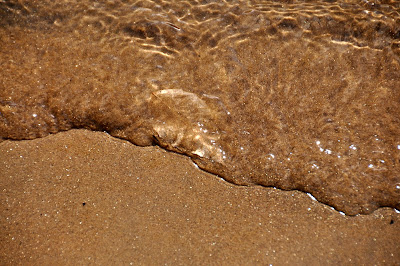 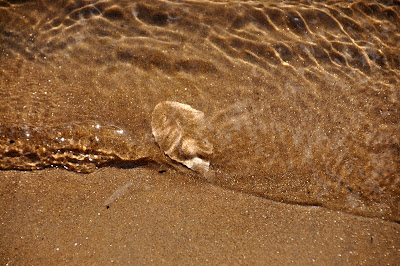 Did you know that before the Califonia Gold Rush ,
North Carolina was the center of gold mining activity in the States?
( Some good information HERE. 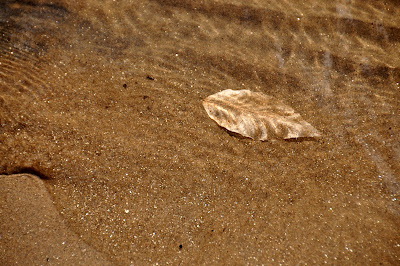 Or perhaps for a few magical minutes, when the sun is at a certain slant,
the river has the power
to turn ordinary things to gold... 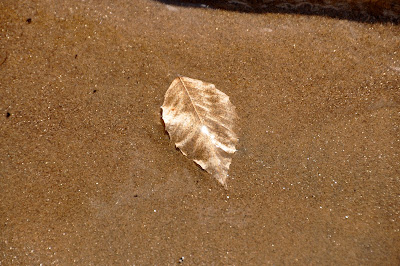 Remembering the magical pool in The Voyage of the Dawn Treader,
I'm not tempted to put this theory to the test. . .

I'll just enjoy the shifting pattens and the thought of what might be. 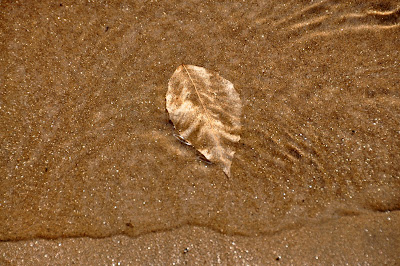 Vicki, those are some of the most beautiful, magical photos I have ever seen!

I didn't know North Carolina had a gold rush. Doesn't it still have a lot of gems to be found in the ground? Seems to me I watched a program about people finding emeralds and rubies in an area of North Carolina, but my memory is so iffy I may have the wrong state.

Very interesting shots -- the leaf does have a gold-like appearance. -- barbara

so beautiful! and for me, amazing. I am so accustomed to rivers being full of rocks, big and small, just rocks and gravel - and certainly not golden sand!

wow it goes look like gold...that is really cool....dawn treader is my fav book in that series as well...smiles...

The Voyage of the Dawn Treader was what leapt to my mind as well. Lovely to look at, but not to touch!

Love the patterns and the imagination!

This golden leaf is so inspiring , it could become the title of a new book by you!! Have you got some ideas about writing another novel?
I saw your guessing game at Christmas, and I like it. Perhaps a great idea to do it next x-mas when the Australian family comes to Holland for my 80th birthday.
But for now I wish you a great golden week!

just beautiful
and what a river to walk along
...truly inspiring images

People do find rubies, garnets, sapphires in the mountains. There are so-called 'gem mines where dirt is brought in from gem rich areas and tourists pay by the bucket to sluice and sieve through the material in hopes of finding a treasure. And some folks do.

Amazing what we can see if we really look. And think. And imagine.

Your sour milk pancakes sound good – I’ll try them. I usually make my pancakes with a sourdough starter that I received I think it was in 1996 at work. It was called “Amish Friendship” starter. I froze some of it, and defreeze it when I make pancakes, replenish the starter and freeze it again. They are very good.

I am late for your Book Questions, but I’ll respond anyhow. My favorite book as a child? There were two, in the same genre, and both translated from the English into French: The Call of the Wild by Jack London, and my most favorite was Baree, Son of Kazan by James Oliver Curwood. Of course when I was very small I like the Contes of the Comtesse de Ségur.
The book I finished last night, at about 1:30 am, was “The Optimist’s Daugher” by Eudora Welty. And I went to the library this afternoon and checked out “The Collected Stories of Eudora Welty” 662 pages long. I have in my collection one book of her stories, but I have misplaced it. It is autographed, so I may not want to disturb it. So this is what I’ll read. We are going to visit my daughter in Memphis and she has to go to Jackson, Mississippi for work, and we’ll go along so we can visit Eudora’s home there. (another trip!) So, if you have not read Eudora, I would recommend her, because she has a great writing style.

I forgot to ask you – how do you handle spam? Today I received 69 spam messages on my spam page (I counted them – yesterday was about 56) and 8 additional that went directly to my blog. I deleted them, but now I changed the setting to moderate comments. What do you do about spam?

All I see today is white, so that beautiful gold was a welcome sight!