Gregory Peck and the Coxcomb 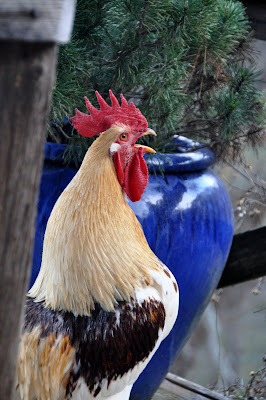 This handsome guy is our California White rooster -- Gregory Peck  (the name I've given most of our roosters over the years. ) 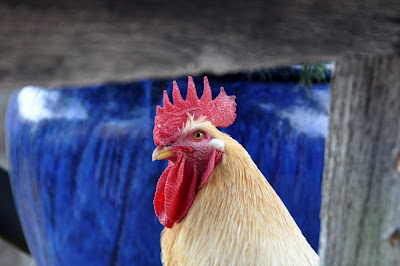 Now that the garden is over, John lets the chickens out in the afternoon and they have begun to find their way to the porch in search of stray dog food or sunflower seeds. 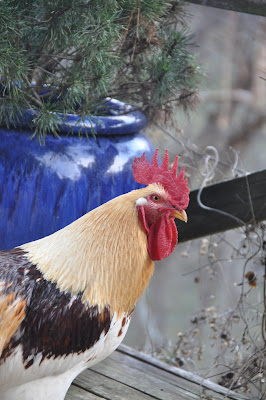 I admit that some stale bread helped ensure Gregory's cooperation 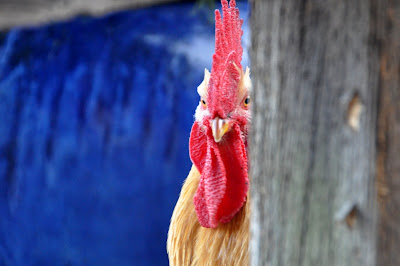 He was wary . . . but he hung around long enough for me to get some good shots of what T.H. White called "mad marigold eyes" and a nice silhouette of his intricate comb.  Which reminds me of a story. . .

Oftimes in a hard winter, the tips of the combs will freeze, turn black, and fall off. It doesn't seem to bother the bird but is does detract from their beauty.

One year, after such a cold snap, a friend of mine who was living with us (a literary type who probably had in mind the word 'coxcomb,') went around telling folks that it had been so cold that the chickens' cocks had fallen off. 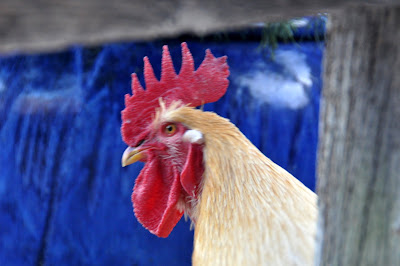 Great pics and funny story! I would have had to use a long lens for that one... I'm terrified of roosters!

Bwhahahahahahahahaha! I would have loved to see the looks on the faces of the people when your friend said that to them.

Suffice to say, you have me reaching for my thermals, Vicki!

What a beautiful bird! You sure got some great pictures of him.

I love the story. Too funny!

Funny. I'm with Victoria. I would have loved to have seen the looks on the faces of the people when he told that story.

Well done...great pics, great story. And I think of Gregory Peck in "To Kill a Mockingbird"...wonder how that could be part of the story too...

He is handsome! I hope he keeps warm enough this winter....

What a gorgeous rooster! And the post title is fantastic.

I'll never look at a rooster again without thinking of this blog.

Well he sure is handsome. And very clean, I don't remember my roosters over the years looking so clean and tidy.

Handsome fella- those eyes are a little mad looking! Have a great Thanksgiving Vicki!

He's quite a handsome fellow. I love the blue pot behind him. Great colors. And I love his name. So does my husband. He calls our favorite singing wren Michael Rennie. :-)

Vicki, your GP is definitely ready for lots of close up pix, and your eye and camera answer that wonderfully!

Wishing you a very Happy Thanksgiving.

Handsome rooster, great name (I smiled a lot reading this), and great pictures of him against that big blue pot. You have a good eye for colour.