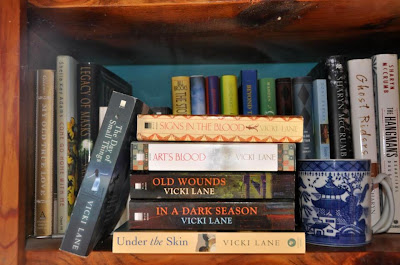 In  the comments on yesterday's post, Lynne in Georgia said " ... I miss Elizabeth and Miss Birdie. I understand times are very tough in the publishing business, but is there any possibility of a new book coming along? From earlier blog entries and the fact you haven't referenced any works in progress for some time, I'm guessing I know the answer. But I'm sure I'm not the only one who is hoping that we haven't seen the last of your characters. We'll also understand if you just don't want to address this any further. Just know that we miss having a new book." 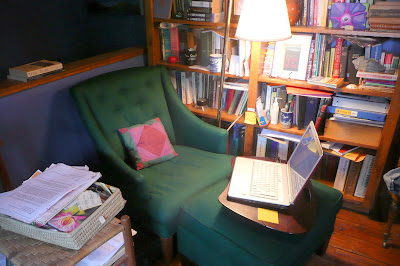 Oh, how I hate disappointing a reader. But at the moment, Lynne, I'm finding my way into a novel with no Elizabeth. It's  set in my county (Elizabeth's familiar surroundings) but in the Civil War era.  Whether there will ever be another Elizabeth is a question I can't answer. I'm proud of the Elizabeth books and know there's more to her story and that of her family, but maybe for the moment she deserves a rest from all the drama. 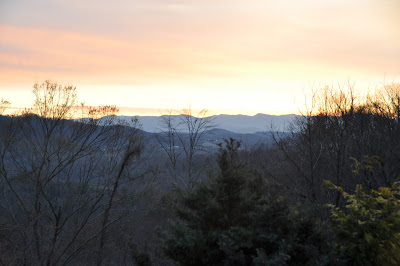 I did a post for another blog on this subject HERE .  But for Lynne, and others who might be interested, my current project is a novel based on a very real incident -- the  Shelton Laurel massacre. 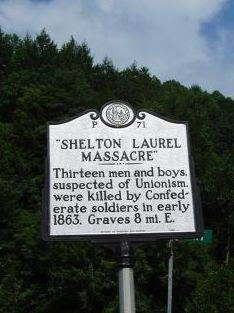 Originally I thought of telling the story from the point of view of a young woman  in Sheldon Laurel -- but as I read more about the Massacre, I realized that I was going to need more voices -- Col. Allen's wife, whose children's deaths were one of the inciting causes of the Massacre, and a young man, a conscripted soldier who participates in the Massacre, are two and there will probably be more -- so many reasons for what happened and so many stories to tell . . .

I've been enjoying a break from the rigors of a deadline but am eager to get serious about this story. Just recently a Facebook friend whose family has lived in our county since the 1700s contacted me and offered to share some family history -- including letters written from a man held in a Union prisoner of war camp. 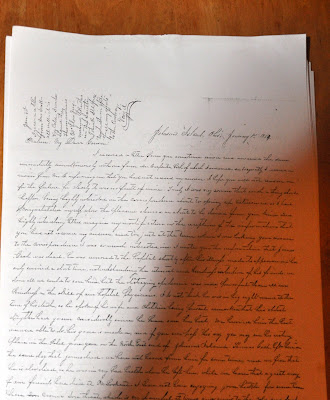 And a handwritten memoir . . . 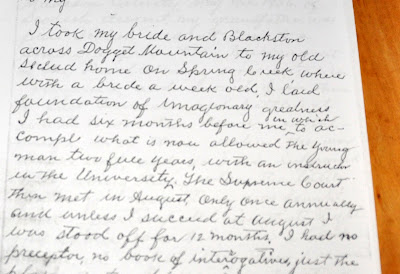 Reading through this helps so much to get the feeling and the language of the era in my mind. And there are many other resources . . .

I see this as a serious, 'literary' novel; whether I'm up to it remains to be seen. But I want to try.

So that's where I am, Lynne.  Struggling with the eternal problem of Good and Evil and all the shades in between,  trying to explain of Man's  inhumanity to Man, trying to see all the sides in the story, and writing this novel -- with no idea of when it will be finished or if it will be published.  Sometime I feel like the Fool on the tarot card.  But that's okay. 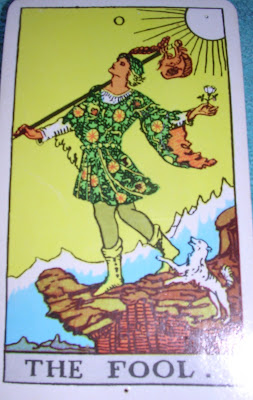 Good luck with the novel. Having the handwritten letters and memoir would be awesome. What a treasure!

Vicki, that sounds like a book I would love to read. I hope your writing of it flows effortlessly and you find a publisher for it.

I can tell from your tone, how serious you are about getting this latest undertaking to work, and I wish you well with it. It could well become an epic novel.

I am sure this is going to become the literary novel you envision, you have the talent, the guts (if I may say so), and once you'll start you'll make it happen. I can' wait to read it! Good luck,
Merisi

I also miss having one of your books in hand, or knowing one is on its way shortly, but the one you've mentioned here sounds so awesome, it's my hope that it finds its way to all of us some day soon. The old letters are priceless, and how wonderful of those folks to share.

How fabulous to be offered those Civil War letters and diary. I can't wait to see what you do with them.
Sam

I'd like to read another translated novel written by you!

ah but a good fool...smiles..love the premise of your new novel and look forward to reading more of it...how cool about the family with the letters...those must be really neat to pore through...

I miss Elizabeth and Miss Birdie too... but can sure understand where you are coming from.

The new direction you are going is interesting. Call me crazy, but I got on a Civil War kick years ago and would spend my lunch hour browing through the State Library's information and reading the letters. They were fascinating. You will do great on this book!

I have absolutely no doubt whatsoever that you will produce an incredible work of literary fiction, Vicki. I can feel your passion for and dedication to the project; the topic is one I probably wouldn't read by anyone else, but since I know you will do it justice, I will be eagerly awaiting the result ... whenever it manifests. Kudos!

And thank you for your kind words about my most recent blog post; I appreciate knowing that someone whose work I admire can enjoy reading a piece of mine. Blessings!

I too miss Elizabeth and her friends. I think you were encouraged to go a little off track with the last book but that's ok. However, be true to yourself. If you want to write more about Elizabeth - do it. You have plenty of readers awaiting!
Meanwhile I wish you luck with your current project.

That sounds like it would be a great book Vicki. I know I'd read it in a heart beat. Love books about that era in history. Hope it works out!

Just knowing there's another book to look forward to is great news and this one sounds fascinating. Maybe you'll revisit Elizabeth someday, but in the meantime, I have no doubt you'll pull this off and take your work to the next level. Can't wait to read the results.

Vicki, I enjoyed reading all that you've expressed in this post. Writing is a talent that you have in abundance, and it's grand to know that you wish to do some stretching, exploration, perhaps even historic excavation.

Best wishes ... I know from my writer friends that much is required!

NO fool! And delighted with your Cold Mountain moment! Hope you are sitting often in that cozy green chair. Katy

I too have missed the Elizabeth and Miss Birdie books. I just know there is so much else to tell. They're lives mirror my own family from the hills and there is nothing like mountain folk. They're tall tales always have a basis in truth.
With that said though I honestly understand the project you have taken on though and I think it is awesome!!! I just started going through boxes left to me from my mother...never knew we came to the mountains from Scotland. Nothing like going through old letters and the like. You take care Miss Vicki and put your sweet heart into it and I will be the first at Malaprops to get a copy! :)Look so foward to your witty posts and pictures every day!
Helene