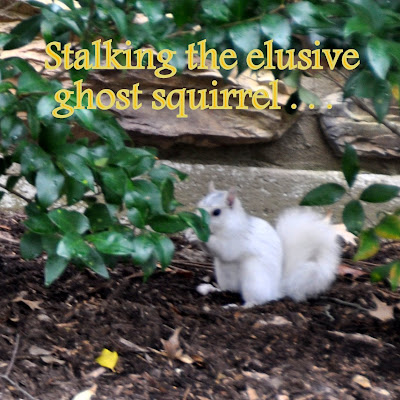 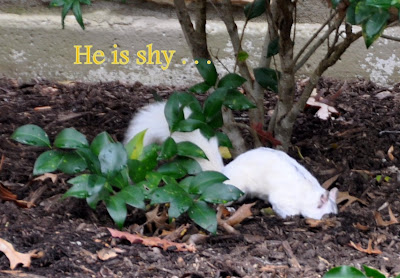 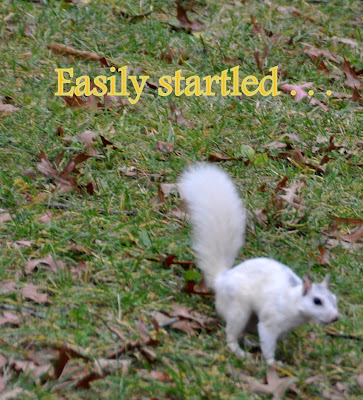 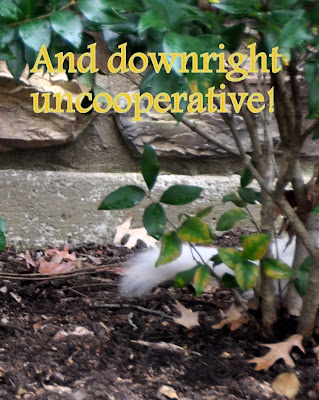 I've heard about these elusive creatures!

A white squirrel! Wow!
Easier to spot right now than later in the snow...

Well, this a 'first' for me. Extraordinary!

I've never seen a white squirrel before! How very cool!

Ah, one that has escaped from Brevard, the white squirrel area? He's a beauty! I've seen a couple in Brevard, NC...but they are not very aggressive in the surrounding area where greys seem to keep them enclosed. Good for you catching pics of him!

These guys were in Carolina Village -- a retirement community in Hendersonville, NC -- which is near Brevard. The white squirrels of Brevard have their own festival.

Oh, that's right -- you were going to go to Carolina Village! Darn, wish I'd remembered, that's where my Beloved's mother lives. There aren't as many white squirrels there as there used to be, and certainly not in the wake of the grand expansion product they have going on, but they are lovely, aren't they?--Mario

Vicki, you've shown me something I never before knew existed, and also reminded me of a college friend who lived in Brevard. And so, I thank you for the new and the old.

Along with most of the others ... wow! I've never seen a white squirrel before! Thanks so much for sharing!

Ha, he is gorgeous though. I've never ever seen one before either so I'm glad you shared this - with your usual panache too!

Ok that's a first for me!

I have never seen an albino squirrel – it looks cute. On my trip I saw a deep black squirrel, but can’t remember which country it was, could have been Ukraine. I have not seen a black one here though.

Thanks for the visual treat Vicki -- ghost or not, white squirrel is awesome -- and also a first for me!

Oh, he (she?) is wonderful! I've never seen a white squirrel, only gray, red (in Oregon) and black (in British Columbia) ones. Thank you for posting the photos, Vicki.