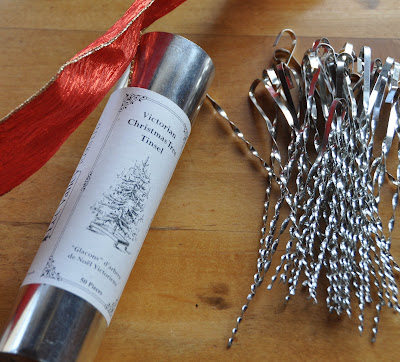 And then there was the tinsel.  These pretty things give a lovely finishing touch -- as long as they're hung so that they dangle loose and straight. If you just hook one on one of the branches, it will tend to stick out at a silly angle, defying gravity and looking nothing like an icicle. The only solution is to hang them from the wires of the lights or to remove some of the needles on the tip of a branch so that the little tin icicle can hang straight. It's a tedious job but it's done! 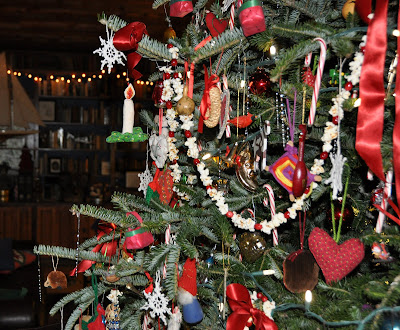 At last all the ornaments are on the tree, from  the crocheted snowflakes and the stuffed hearts and the doves and the candy canes and the red bows and Justin's kindergarten paper star to the survivor of the starfish couple given  to us by friends 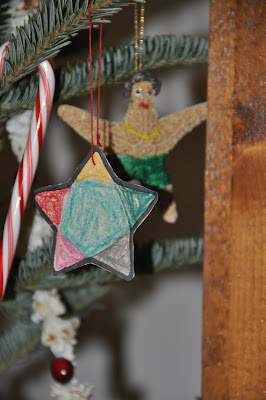 I still have to cut greenery and bring it inside  --- later in the week. But the corner cupboard is wearing its Christmas look. . . 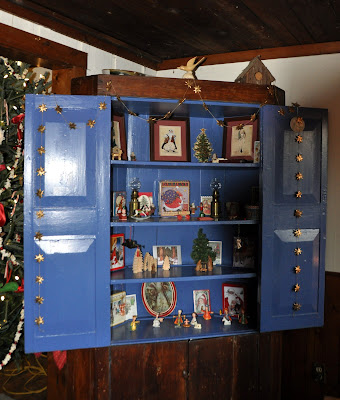 There are lots of Santa's and several creches, including this odd one from India (I love the off-hand way the shepherds carry their sheep and the Fifties suburban housewife hairdo that Mary sports.)

These little figures from Italy are my favorites. I gave them to my grandmother about fifty years ago and there was also a lamb. The lamb disappeared a while back -- I think William got it. And the canopy (the wire thingie from a champagne bottle) on the manger was added by one of my boys -- and now it's a part of the Christmas tradition. 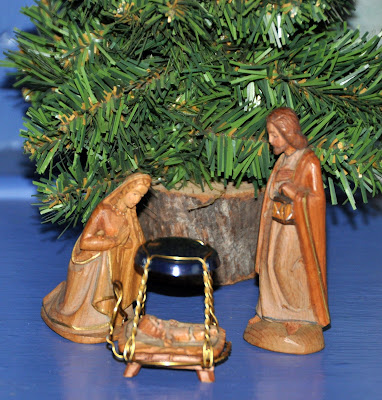 You look pretty much set, Vicki. All of that attention to detail has certainly paid off.

We have Victorian tinsel like yours, and Molly Maguire loves it. She will steal them off the tree and deposit them in her food dish. So our icicles not only hang at strange angles, most also have very non-icicle-like curves in them where we couldn't quite bend them back straight. This house definitely is managed for the comfort and security of the cats! Jim

so cool...love all the homemade or handmade ornaments...we have plenty of those...and the icicles are so cool...think my grandmother had something similar...

Your tree is lovely : ) Those old kindergarten ornaments are my favorites : )

Just the most beautiful tree ever! Designer trees are lovely, but yours is both gorgeous and has the spirit of Christmas! Thank you for sharing.

I love your tree! It is so nice when the decorating is all done and you can sit back and enjoy and recall Christmas past. Well, at least until the next chore demands your attention.

So very pretty! Those tin icicles are a lovely touch.

Do you remember those stringy silver icicles? They were not stiff, but more like silver... gosh, I don't know how to describe them. A comparison is eluding me. But you would pull them out of the box or whatever in little clumps and drape them on the tree. I haven't seen them in years, but draping the silvery tinsel all over the tree was such a big part of childhood Christmases!

Your cupboard is even prettier at Christmastime!

On my childhood Christmas tree, a different kind of tinsel - Lametta - glittered in the light. There was also Angel's Hair hanging in the tree (there was no Santa, Christchild brought the gifts on Christmas Eve).

@ Brenda,
I put a link to exactly that kind of tinsel in my comment: "Lametta" it's called in Austria.
Cheers,
Merisi

Everything is so lovely!